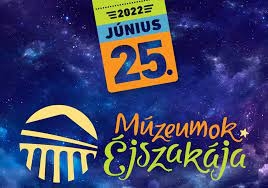 The twentieth Night of Museums running until the early hours will be held on June 25, featuring concerts, guided tours and interactive presentations at more than 400 locations.

Péter Hoppál, state secretary at the ministry of culture and innovations, told a press conference on Wednesday that over 2,500 events were planned in 431 institutions.

The motto for this year’s Night of Museums is tradition remastered.

One of the declared goals is to raise awareness and interest towards public collections and exhibition venues in those who rarely, if ever, would go to a museum, he added.

The city of Szolnok, in central Hungary, will be in focus of this year’s Night of Museums, with 23 locations around the town offering a variety of programmes.

This year Olympic and four-time European champion wrestler Tamás Lőrincz will promote the event as a face of the Night of Museums.