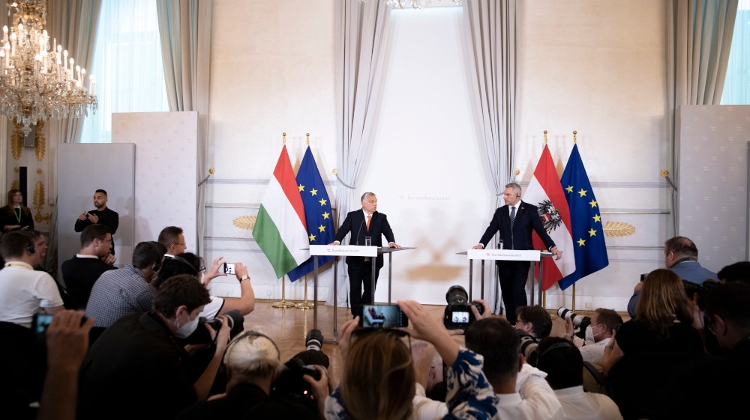 Hungary is one of Austria’s key geostrategic partners when it comes to security, Austrian Chancellor Karl Nehammer said after talks with Hungarian Prime Minister Viktor Orbán in Vienna.

The chancellor talked of a “deep, historical” friendship between Austria and Hungary.

Nehammer said Austria has taken in 80,000 Ukrainian war refugees, adding that his country was also affected by “irregular migration” waves.

So far this year, some 31,000 asylum applications have been submitted to the Austrian authorities, mainly by Afghan, Syrian, Iranian, Bangladeshi, Pakistani and Indian migrants, he added.

These are the challenges Austria must face in addition to the energy crisis, inflation and the pandemic, which requires cooperation and friendship, Nehammer said, emphasising the importance of Serbia.

He said that at the recommendation of the Hungarian prime minister, Austria, Hungary and Serbia will hold a joint conference on “irregular migration”. Austrian and Hungarian police officers patrol the common border together already, and more than 50 Austrian officers support Hungarian border protection efforts on the Serbian border, Nehammer said.

Noting the 1,400 Austrian companies working in Hungary, he said the country’s exports to Hungary have grown by 24% to 6.1 billion euros. “Austria sees standing by the friendship of the two countries and our successful economic relations as a priority,” he said.

Meanwhile, he said Austria sharply rejected all attempts to relativise racism and anti-Semitism. “Austria, in view of its history, has a particular responsibility in the issue,” he said. Regarding gas deliveries from Russia, Nehammer said Austria, similarly to Hungary, is greatly dependent on Russian gas, and is working to diversify its supplies.

Nehammer said he agreed with Prime Minister Viktor Orbán that the European Commission was “all announcements, no implementation”, and said that a planned joint energy purchase platform had yet to materialise.

Meanwhile, sanctions against Russia would take time to make an impact due to Russia’s size and military prowess, he said. Austria is staunchly against a gas embargo, as it would lead to mass unemployment in Austrian and German industry, he said.

At the same time, Nehammer said that taking a stand by Ukraine was of key importance: the invasion of a sovereign country “is unacceptable”.

“There seems to be no disagreement from Hungary [regarding this point].” He also said he fully supported Orbán’s view that “the EC and the member states should honour the importance of the influence of the Russian Orthodox church in the region, and especially in the Western Balkans.”

Hungary & Austria ‘Can Count On One Another’, Declares Orbán in Vienna