Hungary & Austria ‘Can Count On One Another’, Declares Orbán in Vienna 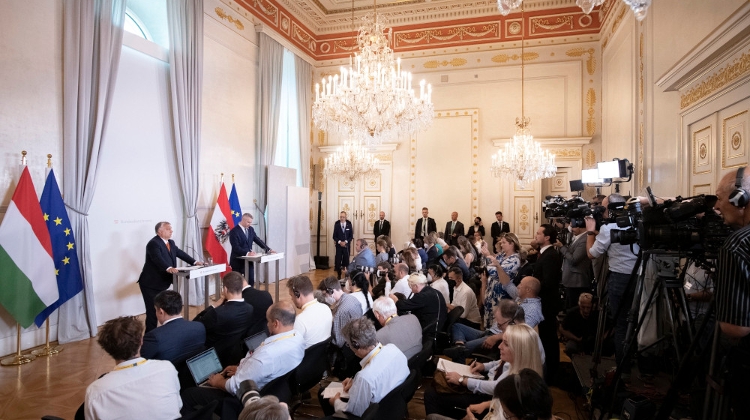 In the coming years, Hungary can count on Austria and vice versa, Viktor Orbán said in Vienna after meeting Austrian Chancellor Karl Nehammer.

“In easy times, friendship is easy; when times are hard, friendship is harder,” the prime minister told a joint press conference. In the current “hard times”, he added, it was a question whether “a special, historical friendship between the two nations will help resolve issues of war, migration, energy and economic cooperation.”

In light of Thursday’s talks, “we can say that we can rely on Austria in the next few years, and vice versa,” the prime minister said.

On the subject of nuclear energy, Orbán said he saw no chance of seeing eye to eye with Austria because “we do not have such rivers and opportunities as our Austrian friends do”, and Hungary cannot go without nuclear energy. While differences persist, the two countries will “try and cooperate and provide mutual security guarantees”, Orbán said.

Concerning the war in Ukraine, Orbán said “it cannot be won in its current form”, and he called for a different strategy, “otherwise there’ll be no peace”.

Restrictions ‘Could Be Much Worse Than We Dare Think’, Says Orbán

The first sign of a wartime situation would be when “they declare an energy emergency in Brussels; when access to some commodities must be restricted,” Prime Minister Viktor Orbán said at a joint press conference with Austrian Chancellor Karl Nehammer.

A wartime situation could be “much worse than we dare think”, Orbán said, adding that it was not clear “how we could avoid recession and the resulting unemployment if the war carries on.”

Meanwhile, Orbán noted that 2,000 Austrian companies operate in Hungary, constituting the second largest investment community, without which “the Hungarian economy could not sustain its currently high level”.

Hungary is different from Austria in the sense that “the magnitude of migration and the problems it causes are completely different” in the latter country, Orbán said.

“Hungary always protects its borders and thus prevents any illegal migration from reaching Austria,” he said. It is also in Austria’s interest that Hungary should protect its southern borders, he said.

“We are your captains at the Serbia-Hungary border”. On the subject of controversy surrounding a recent speech Orbán gave in Romania, the prime minister said Hungary had achieved “fantastic results” in its fight against racism and anti-Semitism, with “the government at the forefront” of those efforts.

Hungary, he added, had “zero tolerance” for anti-Semitism, and any kind of action in this direction was subject to legal prosecution in Hungary and was not tolerated in political discourse.

“I asked the chancellor always to interpret any sensitive historical or intellectual issue that arises from Hungary, if there are doubts, as a cultural matter,” he said.

“No political issue can be approached from a biological point of view in Hungary; what is possible is a culturally based approach.”

Orbán also said he considered himself “perhaps the only openly anti-immigration politician” in the European Union. “I will not … beat about the bush; I’ll always put forward a very clear and straightforward position … I don’t want Hungary to become a migrant destination,” the prime minister said, adding that mounting migration was undesirable.

“This position is not based on biology: this is not a question of race for us; this is a cultural issue. Putting it very simply: we want to retain our civilisation as it currently is,” the prime minister said.

Concerning the Hungarian government’s opposition to earlier planned sanctions targeting Russian Patriarch Kirill, Orbán said: “On a broader context, in view of the future of European civilisation, the Orthodox Church will always be needed.”