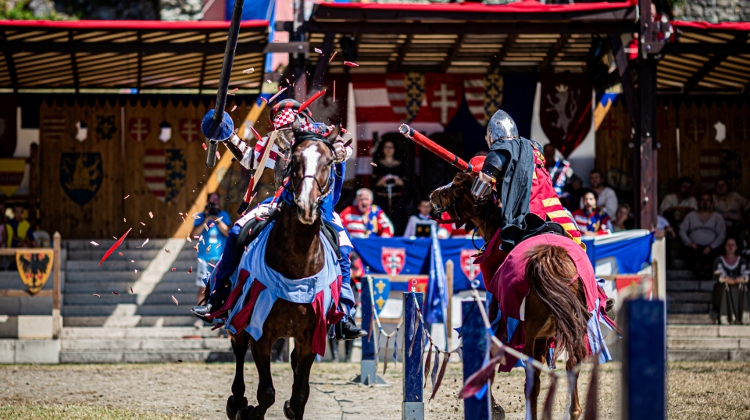 The International Palace Games of Visegrád is the largest medieval festival in Hungary, held annually at the second weekend of July.

The 3-day event is meant to reach a wide international public with its diversified programmes: performances and shows of Hungarian and foreign participants - hundreds of re-enactors, musicians, dancers, comedians and jugglers - in a uniquely authentic environment.

The long-term impact of the famous royal meeting in Visegrád in 1335 proved the significance of Central European cooperation and our aim is to present a vivid example of it by promoting the importance of our historical and cultural heritage.

Since 1985 the Palace Games of Visegrád has been a reminder of this exemplary consensus by strengthening and developing the cultural cooperation among the nations. Thus, the participants of the festival arrive from all V4 countries, as well as Italy, Germany, Romania, Serbia, Slovenia and Austria.

The spectacular tournaments of infantrymen and mounted knights are held at the original tournament field of the royal palace together with dance performances, flag-throwing shows, medieval games, exciting contests and falconry displays.

Several festival programmes take place in the authentic rooms and suites, and in the wonderful renaissance garden of the palace, which helps you get a very special insight into the life of a once so splendid royal residence.

At the other venues of the festival area you can listen to period music, join the medieval dance performances, cheer your favourite knight on at the historical duels, have fun by watching the puppet theatres and street comedies, or simply walk around the busy and colourful medieval market.

Come and be part of this real one-of-a-kind event which presents you and your family a very special blend of history, spectacle and fun!

* The Spear throwing contest on Friday, the performance of archer József Mónus on Saturday and the Archers' contest on Sunday can be visited with the ticket of the following knight tournament.

Above 14 years: 1.500 HUF
Under 14 years: free
The daily ticket includes access to all venues and programs of the festival area excluding the knights’ tournaments.