Orbán to Give Opening Address at CPAC USA 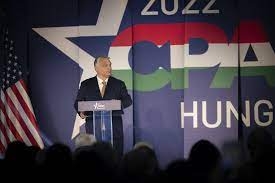 Prime Minister Viktor Orbán has been invited to give an opening address at the Conservative Political Action Conference in Dallas, USA, on August 4, Bertalan Havasi, the PM’s press chief, said on Monday.

Orbán gave a speech at the first CPAC Hungary conference in May, the first such event held in Europe. CPAC was founded in 1974, and has grown into an event drawing tens of thousands of conservatives every year.

The Centre for Fundamental Rights, the organiser of CPAC Hungary, said it welcomed the news that Orbán will be a keynote speaker at the event.

The Hungarian prime minister’s presence at CPAC demonstrates the strength and influence of the Hungarian right wing, the think-tank said.

They said the prime minister’s address to CPAC Hungary had resonated strongly with conservatives worldwide.