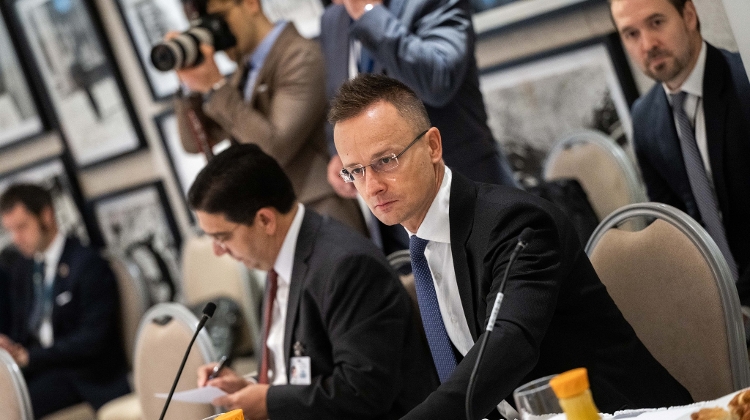 Hungary is implementing the largest humanitarian action in its history, having received 1.5 million refugees from Ukraine as well as participating in the reconstruction of a school and medical facility in Kiev region, Foreign Minister Péter Szijjártó said in New York.

The Hungarian authorities are offering work to Ukrainian parents who want to stay in Hungary as well as education and health care to their children, the ministry quoted Szijjártó as saying at a donor conference on Ukraine held under the auspices of the United Nations General Assembly.

More than 4,000 Ukrainian children started kindergarten or school in 1,250 institutions in Hungary in September, and every effort is being made to help them overcome language difficulties, he added.

Hungary is ready to fully rebuild a bombed school and doctor’s surgery in Kiev region, the latter located in a multi-purpose building which also houses local council offices and a post office, he added.

Additionally, the government has offered 1,000 scholarships to refugees from Ukraine who want to study in Hungarian higher education and special medical services to 130 children, Szijjártó said.

Péter Szijjártó, Hungary's foreign minister, has called on the warring sides to use the week of the UN General Assembly session for launching genuine negotiations on putting an end to the war in Ukraine.

“As we are no longer in the eleventh but in the twelfth hour, the war in Ukraine should be ended as soon as possible,” the minister told MTI in New York.

Commenting on Russia’s partial mobilisation, Szijjártó said all steps escalating the conflict are bad news and all steps that bring peace closer are good ones.

“We, in Ukraine’s neighbourhood, cannot say anything else but that we want peace and call on the major world policy players to finally negotiate with each other, reach a ceasefire agreement, and finally start talks that can bring peace and put an end to the totally senseless suffering of tens or hundreds of thousands, and even millions of people,” Szijjártó said.

The minister noted that over the past few months Turkey had proved to be the single successful mediator by paving the way for relaunching grain deliveries that somewhat mitigated the global food crisis. Based on this achievement, the Turkish government would perhaps have a chance for mediation between the warring sides, Szijjártó said.

Ukraine Crisis - Some 10,000 Refugees Arrive From Ukraine on Tuesday

Fully 5,449 people crossed into Hungary directly from Ukraine on Tuesday, while another 5,008 from Ukraine crossed from Romania, the national police headquarters (ORFK) said.

Police issued temporary residence permits valid for thirty days to 169 people, ORFK told MTI. Holders of such permits must contact a local immigration office near their place of residence within thirty days to apply for permanent documents, it added. Fully 40 people, 20 children among them, arrived in Budapest by train, ORFK said.

The threat of terrorism, made worse by waves of illegal migration, is constant in the shadow of the war in Ukraine, and must not be forgotten, Péter Szijjártó, Hungary’s foreign minister, said in New York.

Terrorist organisations can infiltrate countries around the world on the back of the mass influx of migrants, it’s vital that the international community takes decisive action, the ministry said in a statement quoting Szijjártó, who held bilateral meetings as part of this year’s UN General Assembly.

Meeting Vladimir Voronkov, the Deputy Secretary-General for coordinating the UN’s anti-terrorist activities, Szijjártó said they agreed on expanding the regional office of the UN counter-terrorism office in Budapest.

He noted that Europe has come under increased migration pressure, and he accused the European Union of continuing to encourage people to leave their homes and migrate to Europe. The minister said people “should not be persuaded to leave” but should receive support for remaining in their homelands.

Meanwhile, Szijjártó said Christians were the most persecuted religious community in the world and often the main victims of terrorism. Hungary will continue to provide every possible support to persecuted Christian communities, he said, referring to his meeting with Cardinal Parolin, the State Secretary of the Holy See.

Szijjártó has also met the foreign ministers of Egypt, Morocco, the Philippines, Sierra Leone and Uzbekistan, among others, the statement said.

The minister promised to lobby the EU so that Egypt and Morocco finally receive the necessary support for effectively curbing illegal migration. He said Uzbekistan was key to the stability of Central Asia, and he signed an economic agreement with Sierra Leone.

“It’s clear that when it comes to the key challenges facing not only Ukraine but the world, everyone is following the Hungarian position,” he said.

“From Asia through Latin America to Africa, many of my counterparts have given positive feedback on the practical, common-sense, patriotic foreign policy that Hungary has pursued in recent years…” he said.

As a neighbour of Ukraine, Hungary is experiencing the negative effects of the war directly and has a vested interest in the armed conflict ceasing as soon as possible, he added.

There is hardly a more suitable or broader platform for pushing the peace process than the UNGA, and Hungary’s government will assess the success of the session based on whether it brings peace closer, the minister added.