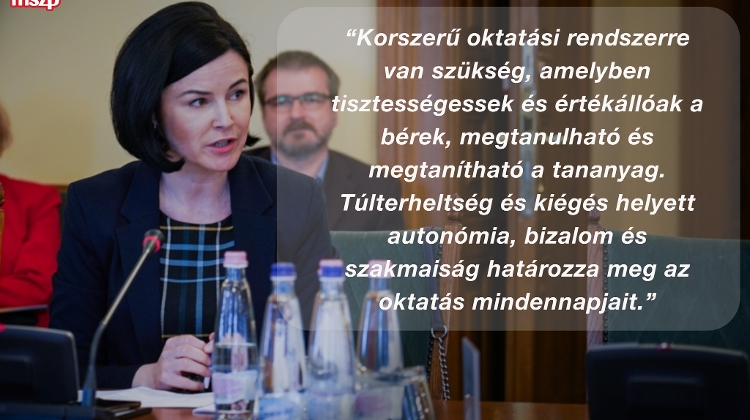 The Socialist Party stands with the participants demanding wage raises for teachers and “restoring professionalism and trust” in education in a demonstration at the Herman Ottó Secondary School in Miskolc, in northeast Hungary, co-leader Ágnes Kunhalmi told a press conference streamed on Facebook on Monday.

The demonstrators formed a human chain around the school on Monday morning in protest against the firing of its deputy headmaster for participating in an action of civil disobedience organised by teachers last week.

Kunhalmi, who is vice-president of parliament’s cultural committee, told the press conference held in front of the interior ministry in Budapest that Hungarian public education was “over-politicised, with rampant unprofessionalism”.

Students drop out in droves and more than 10,000 teachers are missing from the public education system, she said.

She also called for wage hikes for teachers, for the autonomy of education to be restored, and for trust to be rekindled between teachers, students, parents and the government.

“Prime Minister Viktor Orbán set an example of civil disobedience in the past, when he dismantled the metal barriers [raised against protesters in 2007] in Budapest’s Kossuth Square. But we all know that was a democracy, and this isn’t one,” Kunhalmi said.

Hungary’s competitiveness and future are greatly dependent on universities, the minister of foreign affairs and trade said in Zalaegerszeg, in western Hungary, on Monday, arguing that the international race for investments was increasingly decided by countries’ supply of skilled professionals.

Péter Szijjártó attended the inauguration of Széchenyi István University’s incubation and lodging building at the ZalaZone science park next to Europe’s largest vehicle test track, the foreign ministry said in a statement.

Szijjártó emphasised the “fierce” global competition to secure investments amid the ongoing crisis. Tax rates and political stability can be critical in such a competition, he said, noting that Hungary’s 9% corporate tax rate was the lowest in Europe and that Hungary offered a predictable and politically stable environment.

The quality of human resources is becoming the key factor in the race for investments, the minister said.

“It’s not an exaggeration to say that Hungary’s competitiveness and future are greatly dependent on universities and the quality of the work being done there,” he said.