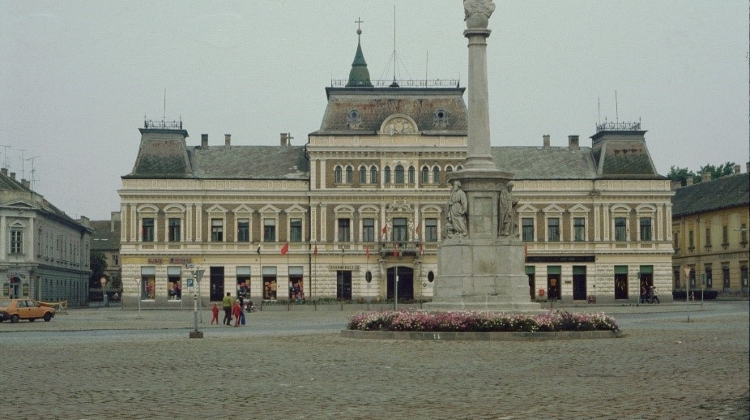 I was alone in the compartment, and though my intention had been to look through what I was to teach the next morning, I sat back lazily and watched the countryside roll past. Sunburnt fields, dusty tracks and higgledy-piggledy gardens full of flowers; mile upon mile of sunflower fields, their huge over-heavy heads turning to follow the sun, reflecting their Hungarian name napraforgó.

The occasional horse and cart bumped along the unmade roads, and small groups of country people were picking paprika or hoeing the dusty ground. Their lunch baskets of beer and salami lay with their bicycles in the grass at the edge of the fields. The laden vines would soon be harvested and I saw many of the ‘heron’ water wells, their name an apt description of the long slender pole which stretched up, sharply defined against the blue sky.

Four hours later, as the shadows were beginning to lengthen, the train clanked across the expansive bridge over one of the widest stretches of the Danube, and into Baja. I dragged my things off the rack and leaned out of the window. Most country stations have only one platform, so along with everyone else I plodded across the rails to the station building.

No Zsuzsa. I looked about, but without much hope, for Zsuzsa was a punctual, reliable person, and resigned myself to the long walk to Petöfi Island (named after one of Hungary's most famous poets), some two miles from the station. She obviously had not received the telegram, and I cursed the Hungarian postal service as I carried my heavy bags through the town, passing through its lovely cobbled main square of imposing, early nineteenth-century buildings of great architectural beauty, and on to the footbridge crossing over to the island.

The Blévisz holiday home was at the far end of the island, and I was dusty and exhausted by the time I arrived. In its garden sat a young couple drinking, and they looked at me questioningly as I staggered through the gate. I tried German: no luck. I pointed to myself and said, ‘angol,’ meaning English, then the name of the factory, its manager, and Zsuzsa, assuming that the couple must have some connection with Blévisz and might be able to help me. 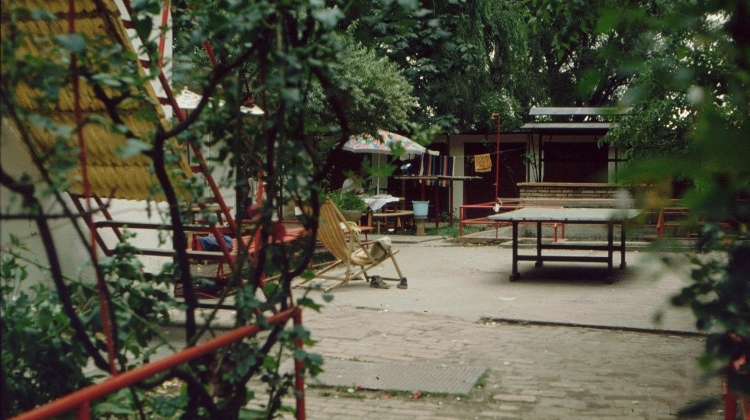 The Blévisz holiday home where I stayed

The man stood up and took my bags into the kitchen. Nothing had changed since my last visit, particularly not the number of mosquitoes on the walls. Beckoning to me to follow, the man went back out, locked the door, spoke to the girl, and we all left the garden together.

Under the trees on a path by the water stood his car. We crossed the tributary of the Danube which separated Petöfi island from the town of Baja on a raft attached to a metal cable. This ferry was just large enough for one vehicle and after we had pulled ourselves across the water, we continued in the car to Zsuzsa's home.

My suspicions had been correct: the telegram had not arrived, and when I had failed to turn up by the earlier train Zsuzsa had assumed I was not coming. Neither she nor the Lingua premises had a phone, and in any case making a call to Budapest took hours and had to be booked in advance through the operator.

I kissed Zsuzsa's parents in greeting, I had seen them the previous year when I had first taught in Baja, and again felt shock at the sight of her father's gnarled and twisted hands, completely crippled from his spell in a Russian camp. About seven hundred thousand Hungarians were rounded up at the end of the war as part of the reparations to Russia.

They were told they were being taken for a few days to do malenkij robot, a little job, but were used as forced labour for agricultural and other manual work. Those lucky enough to return did so only after two to four years, virtual skeletons, many with scabies. Zsuzsa's father had been one of the ‘lucky’ ones and survived, though he had since been totally unable to work; tens, maybe hundreds, of thousands had died in the severe conditions.

After a drink with the couple who had brought me, Zsuzsa took me out to her car and we set off to tell the others in the group that the course would start the following morning as planned.

The ochre and yellow plasterwork of the old one-storey houses baked in the last mellow rays of the sun. Acacia trees, pruned to stand no higher than seven or eight feet lined the streets. Only the main road was tarmacked, the others being mud in winter, dust in summer.

It was late by the time we got away from Jody's, the manager of Blévisz, an unashamed Anglomaniac who preferred the name Jody to his Hungarian name György, and had named his son Gordon. We sat in his garden eating watermelon, sandwiches and drinking wine till the mosquitoes became unbearable.

‘But you've been drinking,’ Zsuzsa interrupted, a total drink drive ban being strictly enforced in Hungary.

‘That's all right,’ replied Jody with a wink.

We both knew what that meant: as one of the better-known personalities in the town he obviously had friends among the local police.

The days passed quickly, getting up at six, eating a quick breakfast of bread, cheese and tomatoes in the kitchen while Marika the caretaker, cleaned. During the first morning break one of the group would go off on his bike to the bridge and bring back a heap of lángos, a deep fried batter-like bread sprinkled with salt, which we all ate hungrily with the coffee Marika had made.

At the end of the afternoon we had a swim together in the river, and in the evenings we usually met in the town in a wine-cellar or sat outside in a café, or I went to Zsuzsa's. Once we saw a dubbed version of Carry on Cowboy, sitting on the wooden seats of the small cinema.

The result was often that no-one had done their homework by the following morning, and as on past occasions, they incurred a fine of five forints for each piece of work not done. Fines were also incurred for yawning, repeatedly making the same mistake, or arriving late. By the time Miklós arrived, we had collected quite a sum and he decided to buy a bottle of champagne and lay on a treasure hunt.

This entailed the two of us in an amusing afternoon of pacing out the house, the garden, and the area down to the river, and an evening of writing instructions and clues. In the late afternoon Marika's husband turned up with a friend and caught a couple of carp in the river, and I shared in the wonderful fish soup for which Baja is justly famous. It bubbled red and orange in a huge, black cauldron over a fire in the garden while we all sat around in the orange glow, chatting and laughing. 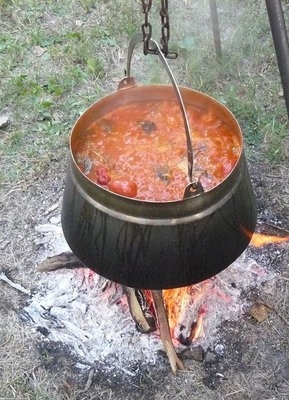 To reach my room, I had to go up some outside stairs to a terrace from which four doors led into the bedrooms. Sometimes, in the afternoons, I sat on the terrace and looked over to the canoeists and the small ferryboat with its oarsman waiting to take passengers to the next island downstream, while on the far bank of the river sat a lone fisherman, and on the sand people sunbathed or read. Miklós had lent me a small battery-operated tape-recorder and a couple of cassettes of my favourite Hungarian music: LGT and Zoran, which I would listen to as I watched the canoeists. 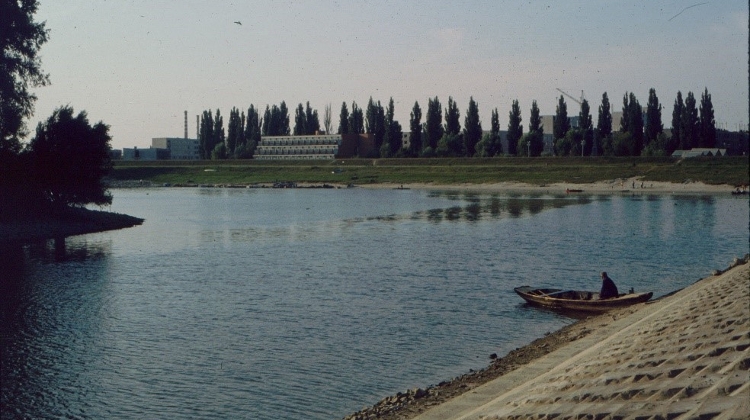 On Monday morning we started work at seven as usual, but at ten o'clock Zsuzsa went with me to the police station to extend my thirty-day visa, leaving some work for the students. When we arrived at the office we found most of the wooden seats in the bare, stone-floored waiting room already occupied.

No-one was talking, and although it was well past ten, the hatch doors in the wall opposite remained tightly closed. There was an atmosphere of silent resignation as the clock ticked on and still no-one came.

‘Shouldn't we knock on the door or something?’ I whispered to Zsuzsa when the clock showed almost eleven; she smiled and shook her head. There seemed to be no possibility of being dealt with before the specified closing time of noon, since most of the waiting people had arrived before us. We waited.

Then finally at five minutes to noon, the hatch doors were opened and a woman said, ‘We are now closing. Please come back tomorrow,’ I looked round for some reaction from the other people, but they merely put their papers back in their pockets and ambled out into the sunshine. They were there again the following morning, as were we. 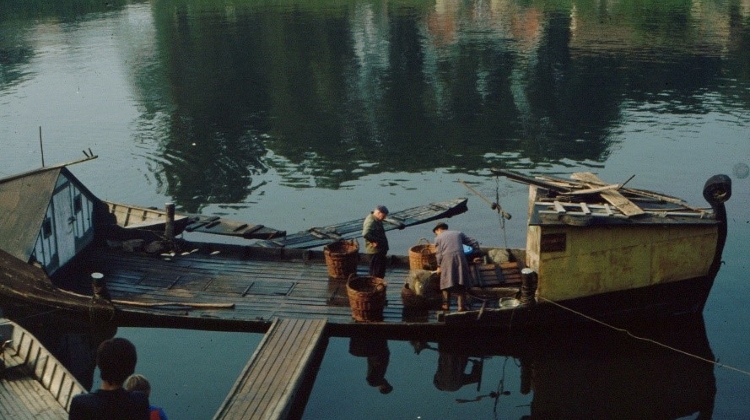 Baja’s fish market on the river

An Englishwoman in Communist Hungary: Arrival by VW in Budapest, 1982