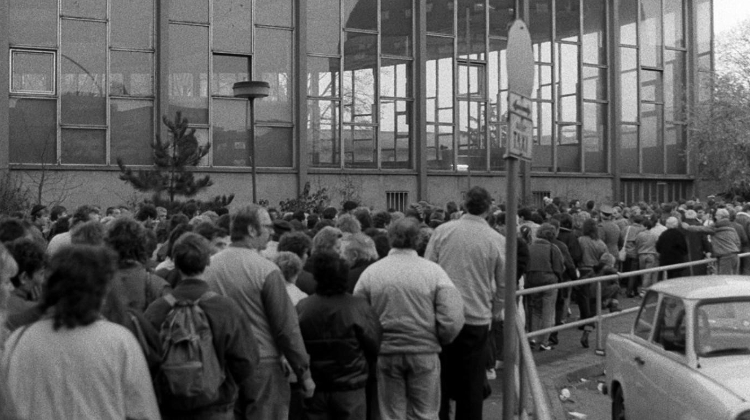 I had written some thirty Christmas cards to friends and relatives in England, and hoping to find shorter queues in the evening, decided to call in at Nyugati station's twenty-four-hour post office one evening after a class at Lingua.

There was a young friendly-looking man behind one of the counters, so I stood myself behind the two or three others in the queue. When my turn arrived I pushed the heap of cards towards him under the glass. He stared at me in disbelief.

‘All of them?’ he enquired. I nodded. ‘This will take a long time,’ he said, and then looking over the top of the glass he shouted to the other end of the large room, ‘Bring this lady a chair, will you?’

I turned to look in the direction he had shouted and saw a door open at the far end of the post office. A middle-aged man emerged carrying a wooden chair and approached me. Without gesture or comment he placed the chair next to me and then ambled off. I wondered if this was supposed to be a joke, but no-one was smiling. I sat down. It was not a joke: it took thirty-five minutes to weigh and stick the appropriate stamps and airmail stickers on my cards. 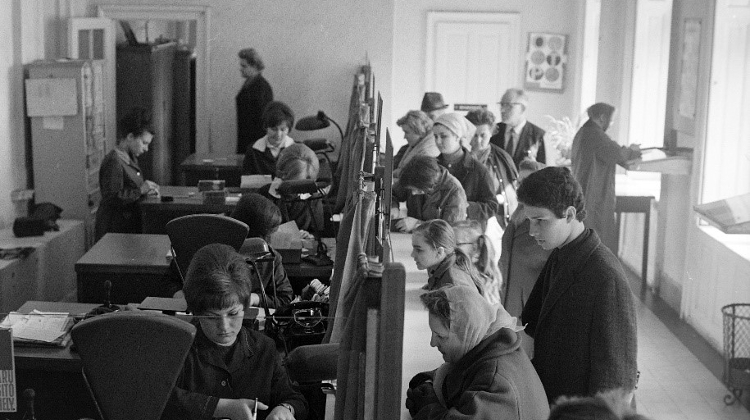 Together with Miklós, Rézi, János and his wife Márta, we had a pre-Christmas gathering and giving of presents, lighting the candles on the tree and eating the traditional bejgli, a kind of pastry swiss-roll filled with poppy seed or ground walnuts.

Our train, the Meridian Express, was due to leave Keleti station at two-thirty in the afternoon. We lugged our cases down to the street corner and on to the tram. Miklós, János and his brother Gyuri met us on the platform brandishing the customary white handkerchiefs.

‘Now, got everything?’ asked Miklós.

We smiled, and Paul slipped off one of his boots.

‘Have a look,’ he said, stretching the top of his socks to reveal a second one underneath, and just discernible near the heel, some pound notes between two layers.

‘You needn't have bothered, they won't search you,’ laughed Gyuri.

As 'Hungarians' we were not permitted to have more than a minimal amount of western currency, yet we would have to pay for our ticket from East Berlin to Braunschweig in West German marks. The guard began slamming doors shut so we climbed aboard and hung out of the window waving until the three white handkerchiefs had merged with the falling snow.

By four o'clock it was dark. We were due at East Berlin's Ostbahnhof at eight o’clock the following morning. To break up the evening we decided to eat in the restaurant car, and began the long trek down the train past compartments of Hungarians chatting over beer and salami, and smokers lining the corridors and looking out at the red lights of level crossings as we rattled past.

I was walking behind Paul, and something caught my eye where his boots and trouser legs met. A five-pound note had worked its way out between the two pairs of socks and was about to fall to the floor. I pulled it out, but another note emerged with it, so we ducked into the next empty compartment and removed all the money to my handbag, hoping that Gyuri was right.

The food was simple and tasty; the dimly-lit restaurant car all but deserted with the two waiters and the chef playing cards and drinking at one of the empty tables. The ticket inspector came in as we were paying, checked our tickets and then joined the waiters and chef. By 11 p.m. we were asleep, having crossed the Hungarian-Czech border.

This was a lengthy process, with checks on passports and visas first by the Hungarians and then by the Czechs who also insisted we fill in a form declaring our possession of a camera – to prevent us from selling it on the train.

At five o’clock in the morning we reached the Czech-East German border. Lights snapped on in our compartment and voices barked, ‘Aufstehen, aufstehen!’ ('Get up, get up!) I sat up. The border guard pointed to the suitcase opposite me, saying ‘Aufmachen!’ (Open it!) I did so, and after a short search he turned on his heel and left.

He was followed by another guard to check the passports and visas, a farcical few minutes of scrutinising our photos, then us, then the photos again. Finally they left and we sank back into sleep. At six we awoke to a view of grey, snow-covered houses as we slowly approached East Berlin.

Our train to Braunschweig was due to leave at ten-thirty from Friedrichstrasse and we still had to get tickets and cross the border. We arrived punctually at eight o’clock, bought two tickets for the overground city train and made for Friedrichstrasse, the cross-over point to the west.

Passing an open kiosk we bought some coffee which turned out to be undrinkable. The S-bahn was exactly the same as the green Budapest HÉV and just as busy, but its atmosphere was completely different. It was all so quiet and grey, so very subdued, hardly anyone seemed to be talking. 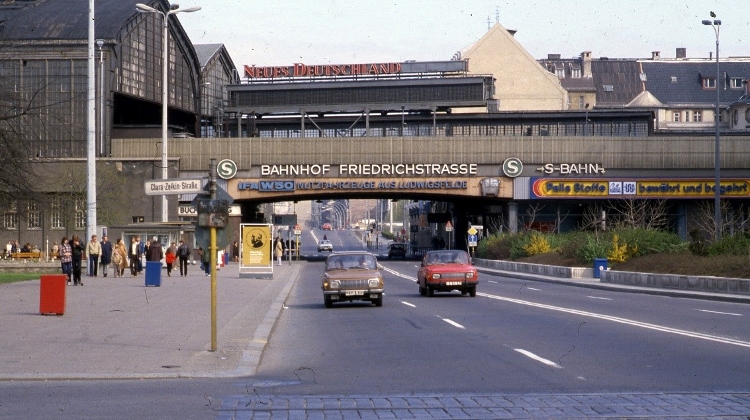 When we arrived at Friedrichstrasse we looked for some sign to tell us the way to the border crossing. Nothing. We followed everyone else down the steps into a concrete area with ticket offices and I asked a man for directions.

‘Over there,’ he said, pointing out into the street. We bought our tickets to Braunschweig and carried our suitcases outside. We looked around and caught sight of the end of a queue of people behind some bushes on the opposite side of the road and went to join them. The long queue stretched into a prefabricated building and the first thing we noticed was the age of the people: they were all elderly. Some looked at us curiously, realising we must be foreigners since no-one under retirement age in East Germany could obtain an exit visa. 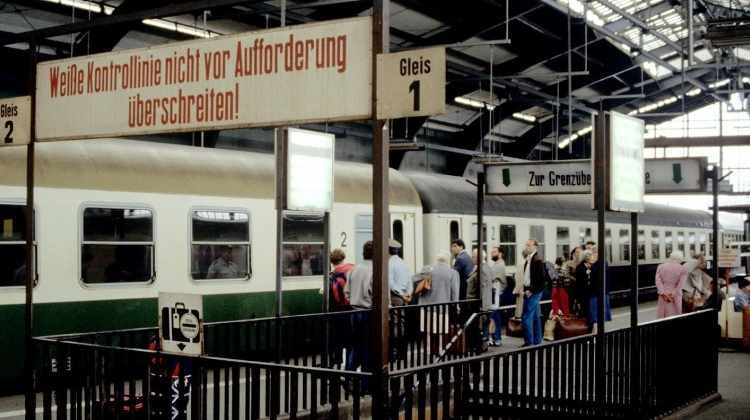 The queue shuffled forwards slowly and as we reached the front we saw the guards checking passports – two checks and then inside to the baggage search. The atmosphere was tense, no-one talked and yet the officials spoke always with raised voices.

The final check took place in what reminded me of the starting boxes used in horse races: narrow, metal aisles with a closed door at the end. I walked in, noticing that above and around me were mirrors and glaring fluorescent lighting.

After several long looks alternately at my face and my photo, I heard a buzzer and the door opened just long enough for me to carry my case through. On the other side stood more guards, who watched as I stood and waited for Paul to follow me. 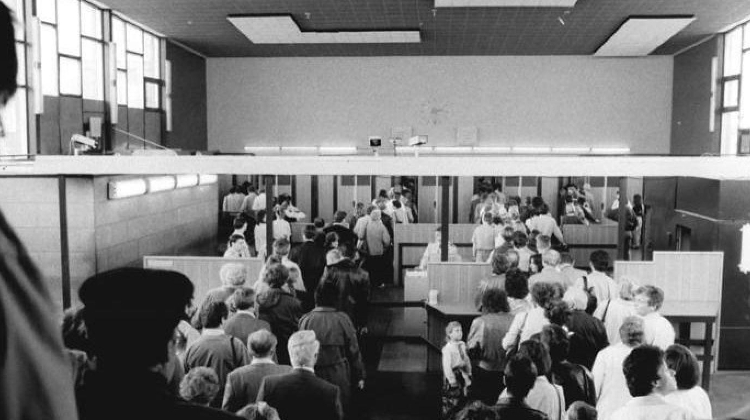 Customs and Document checks at the border  Courtesy Welt.de

Finally, we walked up the steps to the platform with still half an hour in hand. The tea and coffee kiosk was closed, so we sat on a bench in the cold draughts coming from broken panes of glass in the station roof. As I looked up I saw with disbelief that in the girders above us, guards were walking, looking down at us, guns in hand, followed by Alsatian dogs.

There was also a small, glass look-out box under the roof in which sat another guard. My attention was then diverted by a voice shouting over the loudspeaker for someone to remove his suitcase from the white line painted along the platform. Three or four armed guards stood at intervals along this line, one with a dog.

A small group of old people had gathered near our bench, nervously checking their watches against the station clock and each asking the other, ‘Have you got your seat reservation?’ at which the other showed their ticket.

‘Have you got a seat reservation?’ one old lady said, looking at me.

‘No,’ I replied, and before I could proffer an explanation she interrupted me, ‘Well, you can't travel on this train without a seat reservation,’ at which one or two of the others murmured agreement.

‘We've come from Budapest,’ I said, hoping to silence her, ‘you can't get reservations for this train there.’

She shook her head, ‘They won't let you travel without one,’ she repeated.

The train rumbled in. Before it came to a standstill a voice rasped over the loudspeaker, ‘Nicht einsteigen! Nicht einsteigen!’ (Do not get in!). We waited. Two of the guards who had been standing along the white line moved to opposite ends of the train and began to search each compartment, while a third jumped down onto the rails alongside the train.

He walked along its entire length while the Alsatian walked underneath in search of potential escapees hanging under the train. Finally, the inspection completed, they waved up to the guards in the girders above.

People stood silently watching from the opposite platform, which had previously been obscured by the S-bahn. It was then that I realised that we were not in a different station: our border-crossing had been no more than changing platforms at Friedrichstrasse. The guards above were to stop the people opposite from crossing to our train.

The voice sounded again. ‘Einsteigen!’ ('Get in!'), which sent the elderly pensioners scuttling for the doors. We followed, only to find that they all had seat reservations in one carriage, the rest of the train being quite empty. Having settled ourselves in an empty compartment we watched as we moved slowly out of the station and across East Berlin towards the infamous wall.

The railway passed right over it, and though I had seen stretches of the border in West Germany, this was chilling: barbed wire fences, a minefield, watchtowers, guards with dogs, and the grey wall bisecting a street, with a blackened church standing deserted next to it. It was unimaginable that anyone could escape by this route.

Then West Berlin: bright Christmas lights, fur coats, shiny cars, noise, colour, confident young people laughing with Walkmans and new shoes, sprawling on to the train. Through West Berlin and back into East Germany where, in the villages, high concrete walls separated the tracks from the street, and on the railway side of the wall, six-inch spikes were implanted in the ground for those trying to make it over the top.

At the final border at Marienborne, we could see guards training Alsatian dogs to pursue escapees. 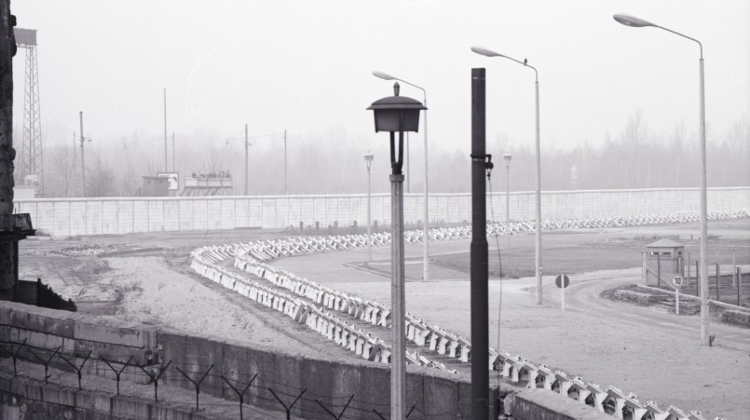