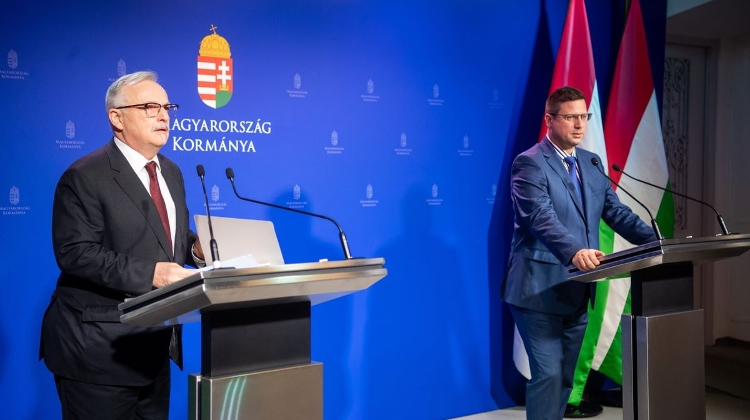 National oil and gas company MOL chief Zsolt Hernádi said the company had served 2.2 million customers at the pumps last week, the equivalent of the peak of a “robust tourist season”.

It failed to fulfil 871 orders from corporate customers, he said. In the past days, turnover has almost doubled from last year, and was up by 2-and-a-half-fold from 2020, he said.

Demand has spiked, consumers started stockpiling, and “a certain degree of panic ensued”. Mol has reached the end of its capacity, he added.

Government price caps on fuel have been in effect for a year, and Mol has done everything it could to ensure secure supplies, Hernádi said. They supplemented about a quarter of the supplies from Slovakia, he said.

Next year, the delayed effects of the EU sanctions and the new sanctions slated to enter into force on February 5 are expected to create a “new crisis”, Hernádi said.

Russian diesel banned from the EU will be then missing from the European markets, he warned. That will cause serious problems in the surrounding countries too, as the two-thirds of the production of the Bratislava refinery, which uses Russian oil, was exported, and so now falls under the restrictions, he said.

Hernádi said preparations must be made to turn to alternative routes should deliveries on the Druzhba pipeline be disrupted.

“This is why imports must be restarted and storages refilled,” Hernádi said. “We must act today to ensure that Hungary can have a stable, import-backed fuel market again by the beginning of next year,” he added. “It is not good if something is expensive, but it is much worse not to have it,” Hernádi added.

Hernádi said the company expected normal operations to resume fairly quickly “after the panic subsides” and the refinery in Százhalombatta returns to full capacity. In 2-3 months’ time, importers will regain about 30% of the market, the same they possessed earlier, he said.

The government has reached an agreement with the EU to continue oil imports from Russia, yet the country needs imports from other sources to guarantee domestic fuel supplies. He said the price increase of gas, electricity and fuel had begun a lot earlier, but “the fact that it has become this steady can certainly be attributed to the Russian aggression [against Ukraine] and sanctions imposed on Russia in response”.

He said that scrapping the price caps would trigger inflation the rate of which would depend on the average price of petrol and diesel. The government has maintained the price caps scheme as long as possible, Gulyás said. Even with the price increase, Hungary will be among the lower one-third of countries in terms of fuel prices in Europe, he said.

Answering another question, Gulyás said that MOL had written “an entirely clear” letter to the energy minister concerning the safety of Hungary’s energy supplies. “This is why we could not wait any longer. We would have loved to maintain the price caps, but it has become impossible,” he said.

Gulyás noted that while Hungary had managed to maintain the price cap scheme for 13 months, there were countries elsewhere in Europe where petrol cost an equivalent of 1,000 forints per litre.

“This, if you will, we can call success, it is just too bad that it is over,” he said, adding that the government expected no chaotic situation to develop in future because “the option of imports would be restored”.

Hernádi, answering a question, said the fuel price caps had caused a great loss to MOL and was “a painful period” for the company. He said fuel deliveries to small pumps would be gradually increased.