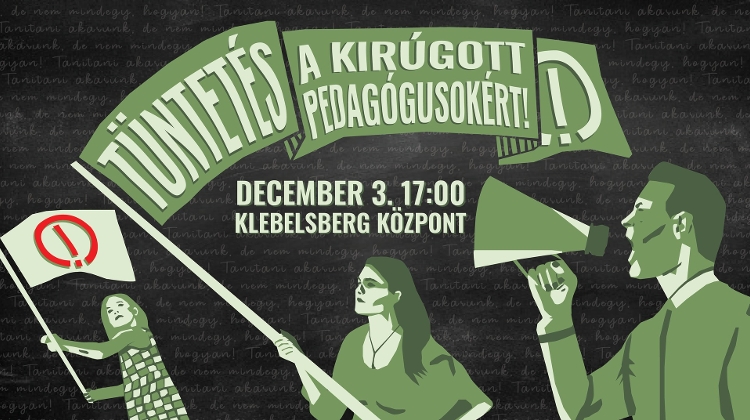 As hundreds of teachers went on strike in protest against the government’s decision to dismiss eight more teachers for participating in the action, a left-wing commentator accuses the authorities of trying to intimidate their critics.

The main pro-government daily remarks that a key figure in the protest is known for her left-wing stance.

On Wednesday, the Ministry of Interior announced that eight teachers had been dismissed from three Budapest high schools for joining a wild strike invoking ‘civil disobedience’ against a recent law limiting their right to strike. For the past three months, thousands of teachers and students have demanded higher wages for the teaching staff and better conditions in schools.

A demonstration was held on Thursday evening in front of the Ministry and several schools remained closed on Friday because of the high number of teachers on strike. Teachers number over 110 thousand throughout Hungary.

In Népszava, Dániel Juhász wonders why the government decided to sack eight teachers, despite the fact that a similar move against five of their colleagues sparked a nationwide protest in September. He believes the Ministry of Interior wants to intimidate teachers and dissuade them from staging further strikes.

He also suspects that by firing the eight teachers, the authorities wanted to divert attention from the suspension of EU transfers to Hungary as proposed by the European Commission on Wednesday.

Magyar Nemzet reports that Thursday’s demonstration was attended by about a thousand people and the main speaker Katalin Törley, who has led a teachers’ protest movement for several years and was dismissed from her job as a teacher in September, said Prime Minister Orbán was unfit for his job. The pro-government daily remarks that Ms Törley is known for her left-wing allegiance.