Orbán Warns of Consequences of EU Sanctions, Opposition in Hungary Slam His Remarks 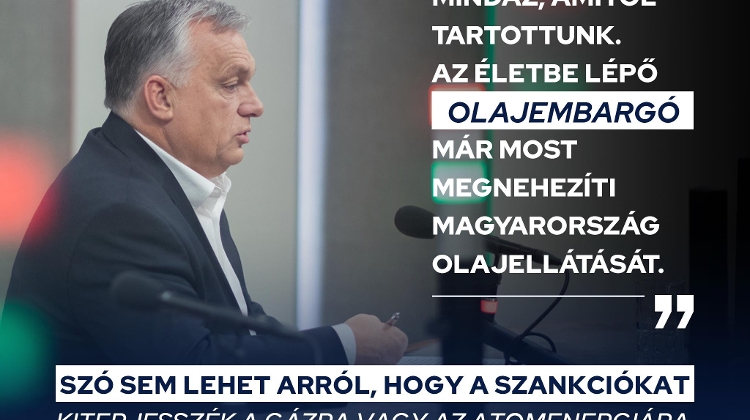 The extension of European Union sanctions to Russian gas and nuclear energy “would have tragic consequences for Hungary”, and the government is working to obtain exemptions, Prime Minister Viktor Orbán told public broadcaster Kossuth Rádió on Friday.

Early in the war, the EU hoped to conclude the war through sanctions or at least facilitate that goal, he said in the interview.

The situation in Ukraine is becoming tougher, Orbán said. Meanwhile, although Russia had suffered losses, its energy revenues are spiking. The “sanctions policy has failed to achieve its purpose”, he said.

While Hungary has achieved an exemption from the restriction on crude which will come into force on Dec. 5, and so has access to the oil necessary to run the country, it cannot extricate itself from the effects of the sanctions on prices, Orbán said.

Hungary is against the EU financing the operation of the Ukrainian state from a loan taken out jointly by its members, and stands by aid through bilateral agreements between member states and the war-torn country, Orbán said.

“We would not like to see the EU become a community of states amassing joint debts,” he said. Due to the war, Ukraine is now unable to finance itself. Hungary accepts that the aid is necessary, but “we are not happy with it — without the war, we wouldn’t have this expense,” he said.

Conservative Jobbik said that Orbán had “lost sight of reality”, noting that the prime minister had voted in favour of all sanctions against Russia in the EU. At the same time, Orbán failed to address the fact that Hungarian food price growth had outstripped all other European countries’ and that the forint had plunged into record depths in the autumn.

The government “has cancelled the utility price cut scheme and is causing a shortage economy with its price caps harking back to the communist era,” the party said.

Meanwhile, “Hungary and Hungarians are stripped of the EU monies they are entitled to, because of Viktor Orbán and his government,” Jobbik said.

Momentum leader Ferenc Gelencsér, reacting to Orbán’s statement that “Hungarians have understood that, whether they like it or not, Ukraine needs support”, said Hungarian society had taken a “humane and fair” approach to Ukrainians and Transcarpathia Hungarians.

“It was not the government but civil organisations, which the government has been persecuting for years, who took the lion’s share in helping people fleeing Ukraine and those staying in their homeland,” he said.

LMP said that contrary to what Orbán said, Russian gas was not cheap and “the prime minister said himself that the long-term contract concluded with Russia last year was no guarantee for secure supplies.”

The solution would be a green transition, the party said.