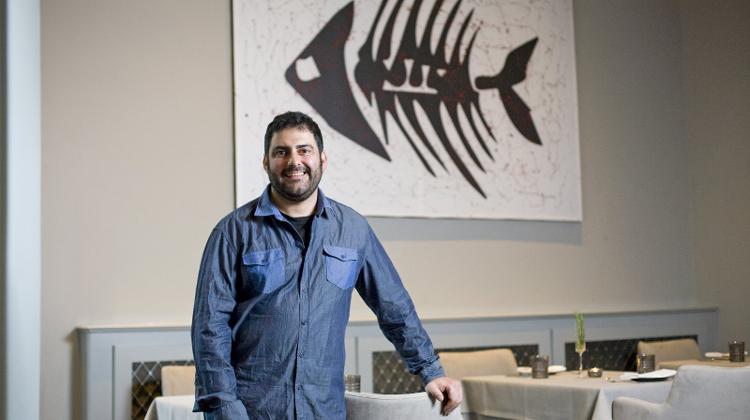 When Marvin Gauci was 13 he helped out at a popular beachside hotel after school and during the summer months. He immediately took an interest in kitchen activities and started participating in breakfast preparations.

Marvin wasn’t particularly fond of academia and decided to ask the hotel owner for a full-time job once he finished secondary school, however the hotelier dissuaded him from doing so, and offered to support him through his studies should he decide to enrol at the Institute for Tourism Studies (ITS).

Marvin joined ITS as agreed and began his formal training, however he always felt that he learned much better when working directly in the kitchen, rather than by attending classes. Marvin took the plunge and decided to terminate his studies and go back to where it all started and learn as much as he could; directly from the kitchen.

Marvin enjoyed several roles in various leading hotels in Malta, always striving to improve his skills, vary his experience, and fine-tune his culinary skills. He helped out in the kitchen, covered bar shifts, and worked the floor. He wanted to know everything there was to know about the way a restaurant lives and breathes.

Marvin travelled to Ireland in 1997 to pursue his career. He spent the first six months working in catering, and then, as it sometimes happens, married his childhood sweetheart and had his first child – but perhaps that story is one for another time.

During his stay in Ireland, Marvin worked at the Buswells Hotel in Dublin, a historic Georgian hotel that dates back to 1882 and is located next to the Dáil (Irish Parliament). Marvin worked his way up in the kitchen, regularly cooking for a number of politicians and VIP guests.

Always intrigued by new experiences and passionate about taking things a step further, Marvin decided to run his first catering business by entering a joint operation to run a restaurant within a renowned golf club in Ireland.

After a while Marvin and his family made the decision to move back to Malta. With enough experience, skill and techniques in his expansive recipe book, Marvin took a calculated risk and opened his first restaurant, Wild Thymein Xemxija which he successfully ran for four years.

This marked the beginning of Marvin’s local success; as they say – the rest is history.

He also operates the following:
* Dinner in the Sky (2016) – The ultimate dining experience. Expect all the perks of dining under Chef Marvin’s capable hands, while being suspended 40m in the sky overlooking one of Europe’s most historical and majestic harbours.
* Caviar&Bull Budapest (2017) – Located adjacent to the stunning Corinthia Hotel Budapest, this restaurant is set to impress and raise new standards in the bustling Bohemian capital.

1. When did you arrive in Hungary and what brought you here?
In December 2016, I visited Corinthia Hotel with my wife on the invitation of the Group CEO – he had an idea for me, but I had no idea what it was... He just told me I need a holiday, and he told me to take my wife with me, too. Then when I arrived here in Hungary he called and said he had the idea of transforming a coffee shop in the Corinthia into a restaurant, and asked me to have a look at it…

So I was here, found it all great, and he told me he wants this to be the greatest restaurant on this street in downtown Budapest, and possibly even in Hungary. When I asked who will run it, he offered it to me. I spent 3-4 days here during that trip, looking around before going back to Malta, then we discussed details, he encouraged me a lot and helped to make the decision for my wife and me to make the move.

I was told to start immediately; to knock the old place down and just inform him about what’s happening. I was given ‘resources’ for the reconstruction work, was given the best people, great project managers etc. and then spent a fortune decorating it. Still I don’t actually live here full time but come every week, however I just bought a residence here...

2. Have you ever been an expatriate elsewhere?
In Ireland when I was in my 20’s.

3. What surprised you most about Budapest?
It’s such a beautiful city, also the mentality of people, and the eclectic architecture – it is all so beautiful, not just the Parliament and the Basilica, the overall diversity of the city.

4. Friends are in Budapest for a weekend - what must they absolutely see and do?
First of all come to my restaurant to eat, and we’ll take it from there depending on their age and mood.

5. How do you describe your restaurant, in just a few words?
Mediterranean haute cuisine in the heart of Budapest. It’s truly ‘unique’ here, I say that not just because it is ‘good unique’, but because it is really different, in several ways - in my opinion in a very positive way - it needs to be experienced.

6. What is your favourite Hungarian food?
Goulash?!

7. What is never missing from your refrigerator?
This is hard to answer because I have just about everything, since I’m a Chef.

8. What is your favourite Hungarian word?
Egészségedre!

9. What do you miss most from home?
I do not miss anything really since I go back home whenever I want.

10. What career other than yours would you love to pursue?
Well it could be said I’m a ‘jack of all trades, and master of none’... At the moment I have 15 properties being built by my subcontractors. As well as a chef I’m a carpenter, and do much of the wood work myself; in fact I do everything needed to be done, including the art on the walls, and the menu holders here in the restaurant I made it myself. Being in hospitality means you have to have a flare, you have to be able to act, able to do just about anything to please guests. After working in the restaurant business, I don’t wish to have any other career or do ever anything else.

11. What's a job you would definitely never want?
I don’t think there is a job out there that I would not want to do, I really don’t mind doing anything.

12. Where did you spend your last vacation?
The last real holiday must have been about 15 years ago. Apart from that for our 10th wedding anniversary, 8 years ago, we went to New York for a special break. Last year we went to Lapland with the kids, but that wasn’t a relaxing trip as such.

13. Where do you hope to spend your next holiday?
Boston and New York – my wife and I loved it there.

14. Apart of temptation what can't you resist?
Well, firstly I can resist temptation. I’ve never ‘done’ casinos, women, drugs, motorcycles… because a lot of my friends died either by motorcycles or drugs or they lost everything either to woman or casinos….so I stay well away from such things. But…:) I love to party, and I love people in general. See people having fun in my restaurants is something I cannot resist. I love watching people enjoying themselves, I love watching people’s faces after a good meal. That motivates me to create new dishes, and to really care about the quality. The work I do it is not a job, it is a lifestyle.

15. What was your favourite band, film, or hobby as a teen?
Favourite film? You know what, I have been working since I was 13 years old and honestly have never had time to watch films, not until very lately as I see some just when flying. When I was young I never even watched TV, I have always been interested in dining, and that’s what I have spent all my life doing. I didn’t have a favourite band, either. The only think I was interested in was the cuisine and hospitality, in restaurants. The whole concept of having a restaurant was more interesting for me. And having people over for dinner, having people on their special occasion celebrating in your house is better than seeing any film or band. And that for me is the ‘ultimate’. As for hobbies: diving, snorkelling, fishing – and then cooking what I caught and sharing it with friends.

16. Red wine or white?
It is like asking if I prefer to breathe or to eat. You need them both. If you are having a fish dish you need a certain type of wine, you know. Wine is wine, it can be combined with whatever you are having.

17. Book or movie?
These days I would actually choose to watch a movie.

18. Morning person or night person?
Both.

19. Which social issue do you feel most strongly about?
I feel for all social issues, for homeless people, children without parents, hunger in Africa, and so on. But I think to my mind, the strongest such thing I feel for is ignorance – meaning ignorant people. Not uneducated people, but ignorant people. They know what is right and wrong but they still do wrong. They know that what they do will hurt someone, but they do it regardless. And this leads to many social issues.

20. Buda or Pest side?
Well, I have only been here for 6 months, but I would choose Pest because it is so lively.