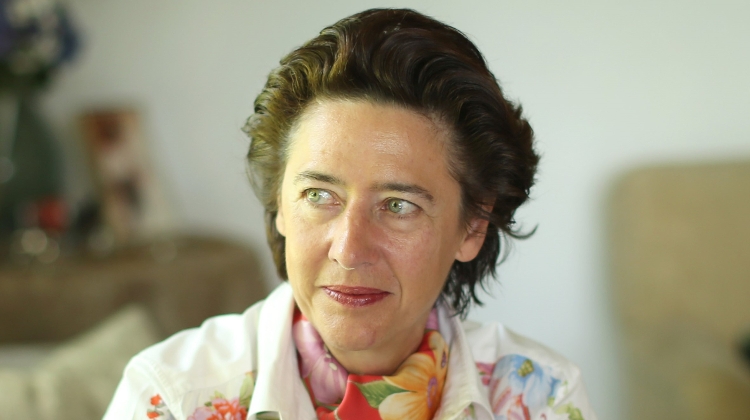 Ambassador Anunciada Fernández de Córdova arrived in Budapest this Spring, and presented her credentials on June 25. She has a Law degree, she's also a poet, and an enthusiastic bicycle rider.

She started her diplomatic career in the Embassy of Spain in Ghana. She has served in different positions in the public (Ministry of Foreign Affairs, Ministry of Culture and Ministry of Interior) and private sectors.

In 1993 she was admitted to the staff of His Majesty the King’s Office, where she remained until 1999, when she accepted the post of Director General of the UNI2 Foundation.

In 2006 back at the Ministry of Foreign Affairs, she was promoted to Director General for Iberoamerican Multilateral Organizations, and in 2009 she was appointed as Ambassador of Spain to Slovenia.

In 2015 she returned to Spain as Vice-Counsellor of Culture and Tourism of the Community of Madrid. From 2017 until her appointment as Ambassador to Hungary, she worked as Chief Advisor for Central Europe for the Director General for Europe in the Spanish MFA.

Besides her official activities, Ambassador Fernández de Córdova is a known author of poems and narrative with numerous publications in Spain, Her poems have been translated into Slovenian, member of the jury of the Queen Sofía Prize for Iberoamerican Poetry, and in general consumer and admirer of all cultural genres.

She graduated from the Diplomatic School and in 1983 she got admitted to the Spanish Diplomatic Service.

1.    When did you arrive in Hungary and what brought you here?
I arrived on May 15th, posted as Ambassador of Spain to Hungary. May 15th is Madrid’s patron Saint’s day, San Isidro. I felt like that was a good omen.

2.    Have you ever been an expatriate elsewhere?
Yes. I am a diplomat, and a daughter of a diplomat, so I have lived in several countries from my early childhood. I learned to speak Spanish in Chile, where my father was posted, and I had a lovely Chilean accent as a little girl. I have lived in Chile, France, Morocco, Ireland, United Kingdom, Austria, Italy, Slovenia… I always was the “new” student at school.

3.    What surprised you most about Hungary?
I was in charge of Hungary back at the Foreign Ministry, but I was surprised by the solid presence of Spanish companies in Hungary.

4.    Friends are in Budapest for a weekend - what must they absolutely see and do?
My favourite area in Pest is from the Parliament to St Stephen’s basilica: beautiful buildings, cafes, restaurants, terraces… I also find it very pleasant to take a boat trip on the Danube, which is such a protagonist of Budapest, to have a global sight of the city, both Buda and Pest. And of course the Castle, the Central Market, Vörösmarty sq. area…

5.    What is your favourite Hungarian food?
Duck and duck liver.

6.    What is never missing from your refrigerator?
Cheese.

7.    What is your favourite Hungarian word?
Jó napot.

8.    What do you miss the most from home?
Madrid’s unique clear blue sky.

9.    What career other than yours would you love to pursue?
Being a writer. Up until now, I have been able to combine diplomacy and writing.

10.    What’s a job you would definitely never want?
Being a politician.

11.    Where did you spend your last vacation?
In Ruiloba, a tiny village in Cantabria, in the North of Spain.

12.    Where do you hope to spend your next one?
In Ruiloba. I have a house there, which is a family gathering point, and have good friends around.

13.    What was your favourite band, film, or hobby as a teen?
I loved dancing, climbing trees, listening to The Beatles, the movie Sting. Paul Newman and Robert Redford  were my favourite actors.

14.    Apart of temptation what can't you resist?
Dancing when I listen to some music I like. Cheese.

18.    Which social issue do you feel most strongly about?
Women’s rights.

20.    What would you say is your personal motto?
If you want to collect, you have to sow.