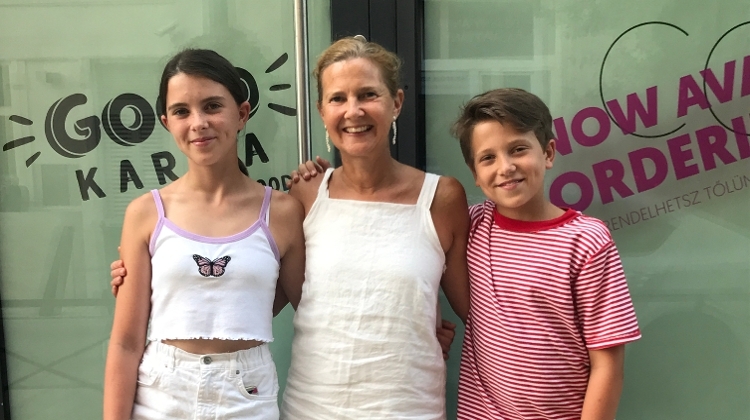 Jennifer Webster is an American expat entrepreneur who originally arrived to Hungary in 1993 to open a bar with friends.

And while the bar never came to be, she did end up founding a commercial film production company, Pioneer Productions, instead.

Through the adventures of running a production company and developing the local film service business Webster met her Hungarian architect/art director husband and together they moved to Argentina to set up offices and to expand the production business to South America.

After 11 years in Buenos Aires and the birth of their two children Jennifer returned to Budapest 5 years ago and began to develop small real estate and interior design businesses as well as a project based on her passion for healthy eating.

Slowly her new venture gained shape and evolved into the launch of the Good Karma brand, a fresh and healthy fast casual restaurant serving up modern Indian inspired food.

With the goal of nourishing and inspiring, Good Karma has just opened it’s 2nd  flagship location near Szabadsag Ter and Webster now has her sites on rolling out the brand across Europe and the US in the coming years ahead.

1. When did you arrive in Hungary and what brought you here?
Originally in 1993 to open a bar with friends!  Soon thereafter we decided to switch to a Coffee bar instead.  But during the development of that project I got invited into an advertising film production shot by my previous employer, Ogilvy & Mather, and through that I met two Hungarian women with whom I decided to open an advertising production company called Pioneer Productions.

2. Have you ever been an expatriate elsewhere?
Yes.  I spent my high school years in Brussels and then summers in Hong Kong during my University days.  And then 11 years in Buenos Aires.

3. What surprised you most about Hungary?
Back in 1993 when I first arrived there was only 1 cash machine in the entire country located at the Hilton Hotel!

4. Friends are in Budapest for a weekend - what must they absolutely see and do?
Lunch at the Vásárcsarnok, dinner at my favorite timeless Hungarian bistro, Café Kőr, and drinks on the roof top Leo Bar at Clark Adam Tér.

5. What is your favourite Hungarian food?
Túrós csusza and Káposztás Tészta pastas and Tojásos nokedli.   And  Túró Rudis, Almás pita and Hó Kifli are delicious too. But nowadays I don’t eat meat or dairy or gluten so unfortunately they’re all off my list.

6. What is never missing from your refrigerator?
Lemons. Loads of vegetables and coconut yogurt.

7. What is your favourite Hungarian word?
Ciki.

8. What do you miss the most from home?
Target.

9. What career other than yours would you love to pursue?
To reform Elementary education and to develop a holistic healthcare system.

10. What's a job you would definitely never want?
Working in a bank.

11. Where did you spend your last vacation?
At our summer home at the beach in the North Fork of Long Island, NY.

12. Where do you hope to spend your next one?
India

13. What was your favourite band, film, or hobby as a teen?
I can’t remember!

14. Apart of temptation what can't you resist?
Potato Chips

17. Morning person or night person?
Definitely night but I’d love to become a Morning one.

18. Which social issue do you feel most strongly about?
Helping children in need / the homeless/ Climate change and the environment are a 3 way tie.

19. Buda side or Pest side?
In my single years I was definitely a Pesti Girl but now that I’m a parent I am 100% a Buda die hard.

20. What would you say is your personal motto?
Win Win is the only way to go.