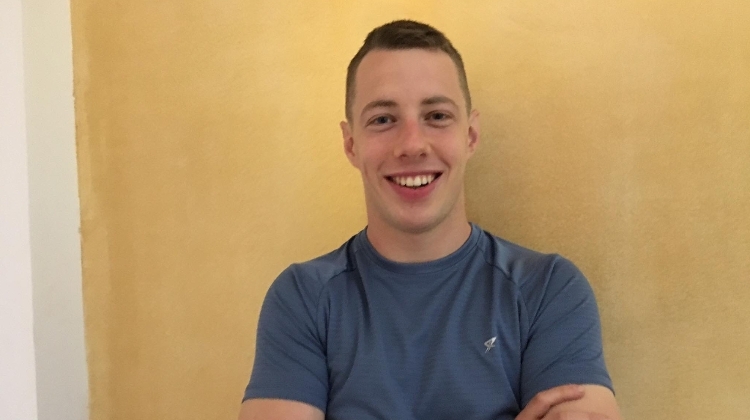 Conor told us he's an Irish fitness professional currently operating here in Budapest out of the gym Smasher Training Systems, downtown in the 6th district.

Prior to arriving to Hungary he was working in Ireland in a private training facility helping clients to improve the quality of their lives through fitness training.

From an academic perspective Conor holds a Bachelor’s Degree in Strength & Conditioning for Sports, and a Master’s Degree in Coaching Science from University College Dublin.

His expertise is primarily in designing & delivering quality training programs with the aim of maximizing performance in sports & reducing the risk of injury.

More recently, since moving to Hungary, he is working primarily with English speaking clients who wish to lose some weight, build some muscle, and improve confidence through fitness coaching.

1. When did you arrive in Hungary and what brought you here?
I first came to Hungary early last year, & as I'm sure is often the case; "there was a woman involved". My better half Dominika is over her in the city studying in the Veterinary University.

Naturally I jumped at the opportunity to experience a new country & culture!

2. Have you ever been an expatriate elsewhere?
No, prior to coming here I would say 8 days would likely have been my longest consecutive stint outside of Ireland. Likely why i had the hunger for a bit of travel!

3. What surprised you most about Hungary?
I would have to say first & foremost how safe the city of Budapest actually is, really a credit to the people here! But secondly how English-Friendly the city is. As a non-Magyar speaking person, the language barrier was a  massive source of anxiety prior to the big move.

4. Friends are in Budapest for a weekend - what must they absolutely see and do?
It absolutely has to be the Baths! On a summers day the Palatinus baths on Margaret Island is myself & Dominika's dwelling of choice!

5. What is your favourite Hungarian food?
My guilty pleasure has to be  the famous chimney cakes.. though  I won't embarrass myself trying to spell their Hungarian name.

6. What is never missing from your refrigerator?
Natural Yoghurt - So versatile...

7. What is your favourite Hungarian word?
Has got to be the "Szia / Hello" pairing when said to an unsuspecting native English speaker. The look of confusion as they try to figure out if the shop clerk serving them just making a dogs dinner of speaking English is golden!

9. What career other than yours would you love to pursue?
I've always been hugely interested in psychology, & knowing what makes people tick.. perhaps something to do with all the mad characters one encounters during an upbringing in rural Ireland!

10. What's a job you would definitely never want?
Prior to working in the health & fitness sphere I worked in various kitchens for years both as a cook but prior to that scrubbing the pots as a porter.

When you have a good crowd of co-workers you can all have a great laugh, but by God the hours are long & the work ain’t easy! Full credit to those working in busy kitchen jobs but I would not like to return to that line of work.

11. Where did you spend your last vacation?
Last Summer I joined my girlfriend & her family for a week in the Sunny Beach Resort in Bulgaria, a beautiful part of the world that I'd definitely recommend!

12. Where do you hope to spend your next holiday?
I'm big into my history, & seeing the holocaust museum here in Budapest curbed my interest. I would love to go to Krakow, and from there check out Auschwitz.

Both for the history & also as I've been learning the Polish language this past few years & I'd like to practice it in real-time.

13. Apart of temptation what can't you resist?
I must say I'm a sucker for dogs. I absolutely love them! Not man’s best friend for no reason!

Though this could become a problem, we already have 2 since moving to Budapest in our 55sq meter apartment. Perhaps one day we will retire in the country & open a doggie retreat!

14. What was your favourite band, film, or hobby as a teen?
As a teen I was big into the Prodigy as I recall & other obscure dubstep DJ's whose music sounded akin to a blender malfunctioning - cringe lol :)

My Main hobbies were always sports, Brazilian Jiu-Jitsu & Rugby being my personal favourites.

16. Book or movie?
More of an audiobook kinda guy, so movie!

17. Morning person or night person?
My line of work generally entails 5am wake ups so by default I must be a morning person!

Though it's made a lot easier in summertime in Hungary when its just under 20 degrees at that time. It’s in fact the most bearable time of day temperature wise for a pasty white Irishman like myself.

18. Which social issue do you feel most strongly about?
Freedom of speech, the antidote for bad ideas isn't to ban them, it's to expose them and confront them with better ideas. That raises everyone’s bar, the nature of scientific thinking.

20. What would you say is your personal motto?
An Irish colloquial one here: "Keep her Lit!" (if you know, you know). Often this turn of phrase is used to embolden you to stay the course, power through a task or keep going!