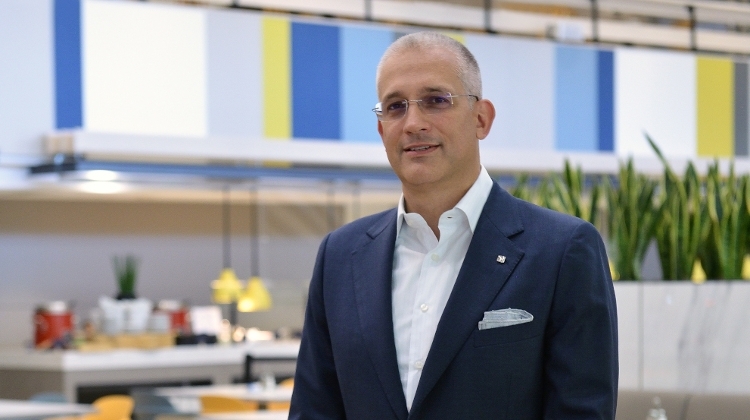 Mr. Kovács has served as the CEO since January 2017, having been an employee of this prestigious hotel group for over two decades.

Under his leadership, Danubius Hotels has continued its major investment projects, is constantly renewing its interests, and has been awarded the Employer of the Year accolade. His professional work was recognized by the Hungarian Tourism Agency in 2019 with the Kőrösi Csoma Sándor Grand Award.

As a specialist in the hotel industry, in addition to 21st century technical innovations such as the application of Artificial Intelligence in hotels, he is also engaged in the innovation of sales strategies.

1. Where did you grow up?
In Budapest, I was 13 years old when my family moved from Pest to Buda, so I grew up on both sides of the city.

2. If you could be an expat anywhere in the world, where would you choose?
Well, I really like it here in Hungary. Having said that, I lived in Spain for six months, and for one year in the UK. During my career I often had the opportunity to move from Hungary and I always chose to stay. If I had to move abroad, since I am a special breed of Hungarian – rather Mediterranean - I would choose places in Europe with year-round pleasant temperatures. Also, perhaps in California, and definitely would not live in a Nordic Country.

3. What would you miss most if you moved away from Hungary?
Friends and family for sure, that is the first thing that comes to my mind. And Budapest, the lifestyle here is a good mixture of Southern and Western, I feel. In the Southern parts of Europe things do flow slightly slower but with maybe more style. Things work well in Hungary, not as strict as in say Austria, with life having an air of flair about it here.

4. Friends are in Budapest for a weekend - what must they absolutely see and do?
Firstly, of course Budapest is a destination that can be enjoyed for more than a weekend. Three or four nights is only enough to take a glimpse of the city. There are the obvious choices to visit like the Buda Castle, Chain Bridge, and Heroes’ Square.

One should also visit the ruin pubs. The exclusive rooftop bar in the Hilton (under construction at the moment) will be a meeting point for both tourists, expats and locals, from next year, according to our plans. It would be great if guests also had time to go outside Budapest to enjoy the Danube Bend area, including Szentendre, Visegrád, and even up to Esztergom. Or the Balaton area is, of course, good but also further. I could imagine then taking a trip to Eger as well.

5. What is your favourite food?
Let’s say I like ‘good food’. I don’t have a particularly favourite dish though. Overall, I like Italian and French dishes, I like steaks, and I like Hungarian food, but I am not eating pörkölt or gulyás too often. I do like a good lecsó, on the spicy side, and having said that I also like good Thai food, as well as a great Indian food too.

6. What is your favourite sport / form of exercise?
Skiing, squash, and I like going to the gym. I also like running, especially when abroad, it is a great way to discover the area where you are staying.

7. What is your favourite place in Hungary?
It’s gotta be Budapest.

8. What career other than yours would you love to pursue?
I would go this way again, since I like working with people, so tourism and hospitality business is right for me.

9. What is a job you would definitely never want?
I would not want to be a lawyer. Or a banker, although I like numbers a lot, nor would I have a job where I always have to sit still all day, so highly administrative jobs are not for me.

10. Where did you spend your last vacation?
In Thailand last January. We went to Koh Samui via Kuala Lumpur, and luckily got back to Budapest safely just as Covid-19 started spreading widely.

11. Where do you hope to spend your next one?
Given the pandemic, this question would perhaps sound better like this: Where would you have spent your next holiday? ;-)

We already had a few flights booked and cancelled. You see we wanted to go to Istanbul for Easter, then fly to Israel in May, but couldn’t. So, given the circumstances we will probably drive to Italy with the kids, to Sorrento and Naples.

12. What was your favourite band and hobby as a teen?
Dire Straits, I had all their albums.
I played water polo then and liked skiing.

13. Apart from temptation what can't you resist?
Depends on what you consider temptation. I always feel an urge to travel and taste good food.

16. Morning person or night person?
Neither, I am a day person.

17. Which social issue do you feel most strongly about?
There are so many, and more and more appear. Within the company we are focused on eliminating plastic waste. Waste in hotels is an issue worldwide, of course, and hotels can do a lot to help protect the environment.

18. Buda or Pest side?
Really depends on what you want to do. I prefer living in Buda, and like the location of the Hilton in the Buda Castle. The hustle and bustle of Pest became too much for me. So, work in Pest rest in Buda, plus there are more and more things available on that side, around Déryné and that area, since there is a demand for quality, and it is natural that such demand will be met by quality offers.

19. Which achievement in your life are you most pleased about?
My two kids, a girl and a boy.

20. What would you say is your personal motto?
I do not think I have one as such, but I tell my people, “You can do things two ways: correctly or again.“