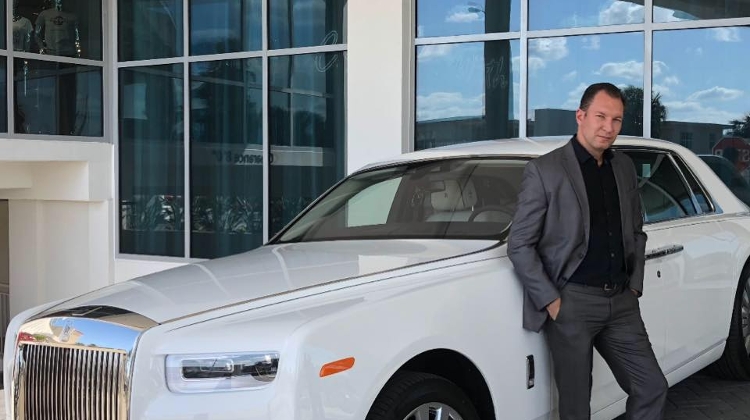 Toth-Harsanyi has two decades of experience working in all aspects of hotel operations, and has significantly contributed to the success of renowned international companies such as Royal Caribbean International.

In 2016, Toth-Harsányi joined Hard Rock’s All Inclusive resorts, revitalizing over a dozen restaurants, bars and entertainment venues across properties in Mexico and the Caribbean. In 2017 he undertook the role of Corporate Food and Beverage Director for Hard Rock Hotels globally, working across the portfolio on F&B concepts, Toth-Harsányi has developed menus and provided strategic and operations leadership for Hard Rock Hotel projects in Daytona Beach, Shenzhen, and Desaru Coast as well as upcoming locations in New York and New Orleans.

On his appointment, Toth-Harsányi said; “I am excited to be returning to my home country and to play a part in ensuring the success of Hard Rock Hotel Budapest. We want to ensure that our property pays homage to the area’s musical history through exciting live music performances, engaging experiences and our unique locally-inspired design elements. Working within the vibrant city of Budapest, we have daily inspiration for how we can best entertain our guests and showcase our Hard Rock hospitality.”

Dale Hipsh, Senior Vice President of Hard Rock International adds; “We are very pleased to appoint Kornél Toth-Harsányi to the position of General Manager at one of our exciting new European openings. Kornel has shown dedication to Hard Rock Hotels in all aspects of his three-year career with us, and we can rest assured that Hard Rock Hotel Budapest is in his safe and capable hands.”

1. When did you arrive in Hungary and what brought you here?
I came here from what used to be called Yugoslavia when I was 14 years old. My family is from Hungary and we lived in Szeged, where I went to an American High school.

2. Have you ever been an expatriate elsewhere?
After the Millennium, in February, I flew to Los Angeles, and joined Royal Caribbean. That was a time of great evolution for these cruise ships, as they became be resemble a city on a boat. I was on the design team, we set up multiple venues for entertainment, plus casinos. On the largest ships we had 6200 guests and 2700 employees on board. Feeding all these people meant 25,000 meals per day, so we set up 19 restaurants and 25 bars.

Next I became the corporate director of food & beverage for them, responsible for  436 restaurants on 21 cruise liners. We introduced new innovations and changes to ensure guests enjoyed more of a dining experience rather than just a meal.

In 2015 a gentleman called Alex Pariente approached me - he was running the casinos in the Hard Rock Hotels which I know was a respected franchise operation. Hard Rock Hotel then decided to start managing hotels around the world. At that time I became the Head of F&B for the international operation.

We started opening big hotels in places far and wide like Shenzhen, Daytona Beach, Atlantic City, New York, New Orleans, plus others in Mexico and Malaysia. After these ones opened successfully, I landed back in Hungary.

The new hotel here is the first one managed by Hard Rock. It was interesting to come back 18 years later. So now you can say I’m an expat in Hungary since I became a US citizen while abroad there. But my blood is still Hungarian of course, yet I had to reapply for my Hungarian citizenship since I have been an expat my whole working life so far.

3. What surprised you most about Hungary?
I came back to live here in October 2018 from Malaysia, and was really surprizing that nothing had really changed too much. It was good to return, I placed my kids in a school where they can learn English and Spanish. I also started to speak Hungarian to them, and started to live the Hungarian lifestyle myself, and it was really shocking to see that not too much evolved.

This was a part of why I accepted this job in Budapest. Plus I started working with Bálint Erdei, (Redwood Holding), we are the same age, and our visions are similar. We are able to give a ‘Western outlook’ to Budapest and this hotel since the new generation has new demands, and this segment will essentially grow fast – post-Covid. Hard Rock Hotel is a very good example of a business open to change – it is a life style brand for people who want more from travel than just the basics like a nice clean room. I must add that since I moved back to Budapest my lifestyle has slowed down, as here after 8 hours people go home from work, unlike other places where I’ve worked.

4. Friends are in Budapest for a weekend - what must they absolutely see and do?
Come to the roof top bar at Hard Rock Hotel :) Then take a walk in the city, go to the Castle district, and to Margaret Island, which I absolutely love as it is very relaxing. Go to Széchényi spa, and if with kids then do go to the zoo. If here at Christmas time then visit the market at Basilica, or the lesser known one in the 3rd district. In summer Balaton is nice, especially Tihany.

5. What is your favourite Hungarian food?
Palacsinta (pancakes) with Nutella, and a traditional dish made with pasta with poppy seeds and powder sugar.

6. What is never missing from your refrigerator?
Water – now I am into the sparkling variety.

7. What is your favourite place in Hungary?
Nagykovácsi, where we live.

8. What do you miss most from your travels?
What I do not have here, yet I really like, is a ‘cosmopolitan lifestyle’. That includes being able to grab great street food at any time, since such a lifestyle it is not about money but opportunities. Street food can even be Michelin Star quality of course, yet does not have to be expensive, it has to be really tasty. Also I missing the ‘international mentality’, and the temperament of Spanish people, plus Asian food and the discipline of people there.

9. What career other than yours would you love to pursue?
This career is in my blood. I love working with people, and can say I have been a ‘host’ since I was four years old, as I held the tray of refreshments then when guests came to our house. I always felt experienced in this business, I like the vibe of it, and would always choose to work in the hospitality industry.

10. What's a job you would definitely never want?
A job working in a morgue!

11. Where did you spend your last vacation?
In Ibiza, Formentera Island. It has the most beautiful beach, and it was very quiet there about 2 months ago, so I could take my kids everywhere there to show them that part of the world.

12. Where do you hope to spend your next holiday?
Our ten-year marriage anniversary is coming up, so something special in either Maldives or Seychelles - Hard Rock has beautiful hotels there as well.

13. Apart of temptation what can't you resist?
Palacsinta with Nutella! Also, great yet expensive cars are my passion. I collect special cars, not for their speed but because they are somehow unique.

14. What was your favourite band, film, or hobby as a teen?
Band: the British Kingdom Come band, they played light rock.
Film: Conan The Barbarian, with Schwarzenegger.
When young I did all kind of sports.

15. Red wine or white?
Depends on the occasion. Sauvignon Blanc and Cabernet Sauvignon are my favourites.

16. Book or movie?
Books, I read a lot of business-related books by Dale Carnegie. Recently I read Danny Meyer’s ‘Selling a Table’.

17. Morning person or night person?
Both. I just need to rest between 3 and 6 am.

18. Which social issue do you feel most strongly about?
Children and their health issues, and also animal welfare issues. We really care about environmental issues at work, for example there is no single-use plastic in a Hard Rock Hotel at all.

19. Buda or Pest side?
Buda, no question about that for me.

20. What would you say is your personal motto?
I am lead by the motto of the Culture Club at Hard Rock Hotel: Be Authentic, Passionate, Unpredictable, Democratic and Philanthropic.