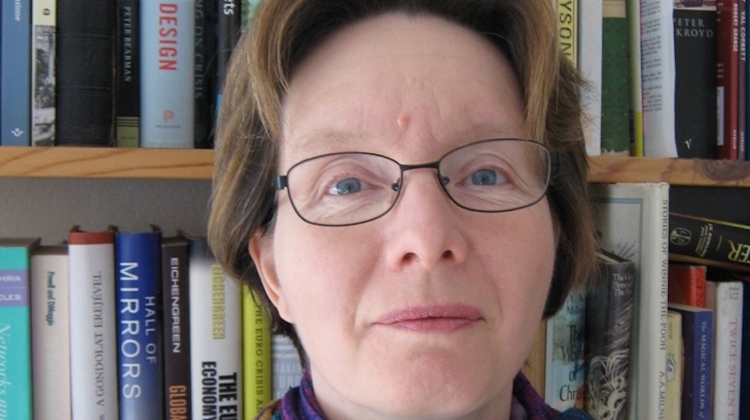 A series of in-depth interviews with some surprising members of the community: Anna Bentley, Literary translator & English teacher, written by Marion Merrick.

It is a truth universally acknowledged that Hungarian is a language exceptionally difficult to master.

Expats in Hungary generally fall into a few recognisable categories from the perspective of their forays into the magyar tongue: Been here ten years but still can’t do more than order a coffee or a taxi; I can understand them, but the locals always answer me in English/German; I’ve had some lessons and I can read a bit, but the pronunciation…..

Thus it is rare, indeed, to find an expat able to have a fluent, grammatical conversation in the local language on any of a variety of topics, and far rarer still to discover one who has read any classic works of literature or poetry in Hungarian.

Anna Bentley is such an extraordinary example, someone who has recently returned from a book launch in London featuring her translation of a Hungarian children’s book.

Her initial contact with Hungary she describes as “rather ordinary, really: I was doing my teacher-training at Oxford University where I met Szabolcs, who was on a Soros scholarship at the same college.”

When he left to embark on his PhD in America, Anna headed for the north of England to begin her teaching career in a 13-18 comprehensive. “Then we decided to get married, and I went to America. Szabolcs was looking for jobs in the United States, in Britain and in Hungary, and the one that worked out best for him was in Hungary.

I had been to Hungary on a visit one summer – I spent a few weeks in Kecskemét in 1994” Anna recalls. “That’s where Szabolcs is from. We also spent an academic year in Kecskemét while he was doing his research – that was really key to learning Hungarian.

I got a job through my mother-in-law, something which, as a Brit, I found very embarrassing,” Anna laughs, “but it was a lot of fun. I was teaching pilots at the air base. It was all men, and many were on the verge of retirement, so they were really just going through the motions. I think they found me quite amusing,” she muses. “They took me up in a plane one weekend, and they laced my Coke with Unicum afterwards!

We had Sunday lunch with my mother-in-law every week – she doesn’t speak a word of English, so I quickly learnt how to praise the food in Hungarian!”

Following the year in Kecskemét, Anna and her husband returned to New York City. Maybe surprisingly, this was when she made the most progress in her language learning. “My Hungarian language developed there because I needed several operations on my ear and I wasn’t allowed to go on public transport or even outside because it was winter,” she explains.

“So, I was stuck in a flat in Manhattan and Szabolcs went off to the foreign language library and brought me Hungarian classics to read – and a dictionary! I worked my way through Jókai’s The Heartless Man’s Sons, through Gárdonyi’s Eclipse of the Crescent Moon – I just did a lot of reading. For me, reading is as natural as breathing, so that was the way I absorbed a lot of cultural knowledge – and a lot of rather strange vocabulary!”

Anna and Szabolcs finally settled in Budapest in 2000 where Anna set about qualifying as a teacher of English as a foreign language and working in a language school.

The move to translation came when Anna discovered the books of István Fekete – many related to animals and rural life. “I’d been reading a lot of István Fekete and really enjoying his books. My mum is a great birdwatcher and I thought what a shame it was that she couldn’t read the books.” And so it was, that Anna then decided to translate some pages for her mother. “I didn’t look up for hours – I just loved it, absolutely loved it!” she says.

“I realised there were translation competitions out there, so I started sending things off – there’s the John Dryden Literary Translation Competition, that was one I sent things off to.”

Subsequently, Anna attended a couple of weekends organised by the Hungarian Translation Association and found out about the courses run by the Balassi Institute in Budapest. Anna was accepted to take the one-year translation course. “It made me read contemporary Hungarian, it introduced me to a whole range of drama, prose and poetry, to literary events in the city and new contacts,” she explains.

On successfully completing the course, Anna was presented with her first professional translation job – an academic book about five Hungarian women writers. “It was massively difficult,” she says, “and was to be published by an academic publisher in the Netherlands. But doing this, I learnt all about the process of translating, editing and proofreading.”

Anna’s next venture came about when her daughter brought home a new book she was to read in school: Ervin Lázár’s Arnica, the Duck Princess. Anna thought it would be excellent practice for her to translate it, “so I sat down and translated the whole thing!” she laughs. “I’d heard of the British publishers, Pushkin Press, and so I sent them a few chapters. About six months later I got an email saying: we like this – can you send us some more?” But then they fell silent.

“There’s a massive amount of luck involved in all this,” Anna says, going on to explain how she then attended a summer school in Norwich under the auspices of the British Centre for Literary Translation.

“They also invite people from the literary world to come and talk, and one of the people they had invited was none other than Assistant Editor at Pushkin Press!”

Anna’s translation of Arnica, the Duck Princess was subsequently published by Pushkin Press in 2019. “That’s what made a little bit of a name for me,” says Anna. “The book was deserving of a wider audience – but so many Hungarian books are.” 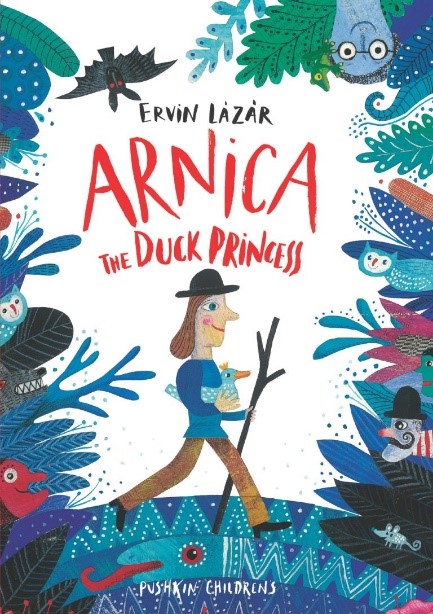 Her translation of part of a play for children, The Knot Fairy by Dóra Gimesi, also featured in an Emerging Theatre Translators Scratch Night organised online by the Out of the Wings Festival.

Following this success, Anna was sought out by a variety of people wanting their work translated, from the CEU to authors hoping for their writing to reach an English-speaking audience.

She was then approached to translate A Fairytale for Everyone, the original of which had been published in 2020, (Meseország Mindenkié). “It stirred up a lot of feeling – there was a lot of controversy about it,” Anna explains.

“The remit given to authors was to write a fairy tale that featured somebody from a marginalized community. And for some people, that meant LGBTQ. But that’s by no means everything that’s in the book,” she adds. “But some stories feature gay weddings, and this was too much for a certain politician on the far right, and she shredded it on Facebook.

That got lots of publicity and meant the book could go to a much bigger print run for the second edition. Early in 2021 I was approached by the Hungarian editor to translate three stories from the book as they had publishers interested. I later found out Harper Collins had commissioned a book report from a colleague here in Hungary. Those stories whetted their appetite, and I got the contract to translate the whole book!”

Anna was translating the book while concerns about Covid were still ongoing, meaning that she communicated with the authors online and only met them for the first time this year, at a reception held at the British Embassy residence. There followed a book launch in London, which she attended together with several members of the Labrisz Lesbian Association and Krisztina Rita Molnár, one of the authors. 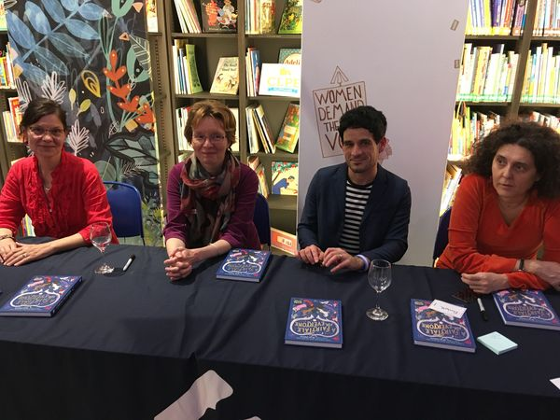 “It was all very exciting,” she says.

“It’s just come out and should be available in Bestsellers. Whether they are wrapping the books in paper or putting a notice on the shop window – as I think they’re supposed to do by law – I don’t know.”

Anna’s other work includes contributions to Hungarian Literature Online (HLO) as well as much private work for authors, though there is seldom a guarantee of publication. “They [publishers] have grants to translate something, but not always to take it on to publication,” she clarifies.

Finding the peace and quiet to immerse herself in her translation work became more complicated with Covid, when her children started online school lessons from home, and her husband was also working in their flat. “My office suddenly became everyone else’s office,” she says.

Anna caught Covid in the spring, which has left her needing to rest every afternoon. Though this has reduced the number of hours she can work she will soon complete a translation of a book of short stories by István Orosz for Typotex.

Aside from translation, a passion Anna has had throughout her life is singing. “I’ve sung right from primary school, all the way through university and afterwards, every year of my life. I sang in Kecskemét too.  I found it tough to be at home all day every day with the children when they were small. When my husband asked me what would make me feel better, I said: if I could sing in a choir.”

Anna joined the Gabrieli Choir in Budapest, then conducted by Richard Sólyom. “It was a very high level, and we did some fantastic things,” she says. The choir stopped rehearsing during Covid, and now has two new Hungarian conductors (Zsófia Soós and Márk Szabó) who run rehearsals in English and Hungarian. They are always glad to welcome new members.

The choir takes part every year in a tradition service of Nine Lessons and Carols at the St. Columba's Scottish Presbyterian Church on Vörösmarty utca. This year it will be on December 10th at 6pm. All are welcome! If you are interested in joining the choir, there is information on their website.

In spite of her Covid-related fatigue, Anna seemingly has huge amounts of enthusiasm and energy, for her music, for translating and for life in general. “You learn so much from everything you translate,” she says – an inspiration to all those expats still struggling with what has been humorously described as a language of “nuclear difficulty.”