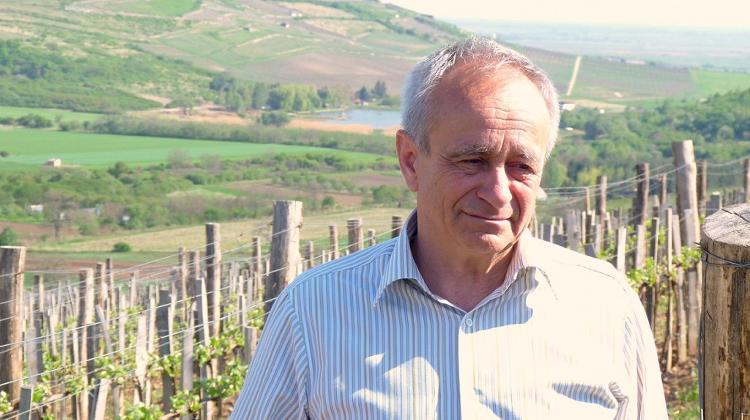 I can’t claim it came as a surprise to me; the quality of Tokaj Furmint. After all; the reason I finally visited the region and now had István Szepsy standing next to me, explaining about the complexity of the Szent Tamás site, was the amazing Tokaj wines I’ve had before, both dry and sweet. Curiosity and of course an urge to try to understand one of the most unique terroirs in the wine world, made it an easy choice to put Hungary high up on the need to visit-list.

Tokaj closes in at almost 400 different vineyard sites. Hence, saying that the soil structure of the region is volcanic would be a way too easy solution. Quite ignorant as well. Adding that it mostly consists of clay and loess, with volcanic subsoil below that, helps a bit further in the understanding. But then, what about the different kinds of Zeolites*, the extremely porous mineral that can be found in Tokaj? And the limestone? And the Tufa? Every site has its local composition and talking about the soil of hundreds of vineyards can easily become a dissertation.

At our visit, István Szepsy takes us around several of his sites such as Uragya and Urban, but ends it all at the part he treasures the most; the 1.63 hectare sized part of Szent Tamás. There are several great wine personalities in the world but not many like István Szepsy. Rarely have I felt so inspired afterwards, now realizing that meeting Mr. Tokaj himself, was one heck of a vinous kick and a real boost for the wine passion.

After more than 40 years in the business – István started working for the co-operative in 1966 – he is still all about passion for his wine region. A humble man with a profound knowledge which he happily shares. He switches between humour and seriousness, curiosity and knowledge. And he has one goal; to find out just how great a Tokaj actually can get.

“I have asked the authorities for an experimental plot over there,” István says and points towards one of the slopes at the Király hill. Curiosity drives him and an urge to find Tokaj’s best sites.

“I have offered to pay all expenses and only asks for a few years of experimenting,” he continues.

But no; István Szepsy are sadly on a level far, far ahead of the authorities, something which I am also reminded of when we discuss the Szent Tamás parcel.

Come back in ten years. Then this part of Szent Tamás is the greatest in the whole of Tokaj,” István says smiling.

The inevitable question is raised of course; why?

“The soil, the complexity of the soil,” he says. “The Zeolite layers.”

When István started working in the 1960′s most vineyards were planted the bush vine way. Today you will find both the traditional style and Guyot and Cordon. When he acquired this 1.63 hectare sized part of Szent Tamás, he ran some tests of the soil before deciding on how to plant the vines and which clone to use.

Eight meters down. When he saw all the subsoil levels in those eight meters, porous and different Zeolite layers with excellent drainage and acting as water moderators for the vines, he realized this was something particularly special. This could become the greatest site of them all.

He contacted the authorities for aid, but was then told, in order to get funds, that he needed to cultivate a specific clone of Furmint which they recommended. At that time he had already been experimenting for years with clone selection within his vineyards and had found out that the best Furmint clones had little bunches and not big, as the one that was recommended.

István took the decision to finance the whole construction of the site with private fundings, when he had some left, just in order to be able to prove the parcel’s superiority. It’s been a struggle, but now, when the site is closing in at almost ten years of age, the vines are already several meters down in the subsoil – six or seven István says – and the clone is the one he has selected himself. The site is organically run of course.

“Come back in ten years. Then the roots are more than ten meters down in the soil and has penetrated through several layers. Then this part of Szent Tamás is the greatest in the whole of Tokaj.”

The Szent Tamas site in Mád, or perhaps it is more appropriate to talk about the Szent Tamás hill, is considered a first class vineyard. But the boundaries of the site seems much bigger today, than the original classification which dates hundreds of years back. The lower part of the vineyard doesn’t have the same drainage and complex soil as for example the higher elevated site of István Szepsy. In other words, know your producer or rather where they have their parcels, if you want to find out the true potential of this classic site (that doesn’t mean the rest is crap, au contraire).

At the estate, István pours more than a dozen of his wines. The 2009 Szent Tamás Furmint** being one of them, the 2008 ditto and one 2007 experimental version.

“I wont make this style again,” he quickly adds when we taste the 2007.

“I tried 225 liters barrique for this one, but want less oak and have moved back to 400 liters barrels.”

István admits that the 2007 was a real success and the few bottles made were quickly sold out. But it isn’t how he wants his wine – and although being extremely impressed by the 2007 – I understand his way of thinking when having the 2009 in the glass. When tasting the 2007 it strikes me that this I would probably place, in a blind tasting, as a modern top Burgundy.

The 2009 Szent Tamás is a great, great wine at the same level as a Grand Cru Burgundy site. The bouquet is filled with yellow fruits, green pineapples, smoke a discrete floral touch, nuanced and carefully used oak, but above all, wet rocks in abundum. I could still be sniffing this one if I didn’t have a plane to catch! On the palate it expresses class all the way. Mineral acidity, lemons, a slight peach feel, discrete wool and integrated oak. Some smoke. Impressive intensity and amazing length. Finesse all the way. Still a young wine but this one you just want to have in your collection. It’s a real treat and the proof that all the hard work of István Szepsy’s has paid off.

The 2008 Szent Tamás has a cooler appearance with scents of wool, spring rain on rocks, red apples and some lemon fruit. Also the unripe pineapple I detect. Again, gentle oak. Lots of elegance on the palate and lovely nuanced mineral notes. A restrained style compared to the more flattering 2007. Smoke and apples. A slightly green note adds an extra touch. Still a bit young but with plenty of fruit left. Long clean finish.

Ten years. Then I’m pretty sure we are talking about Tokaj as a world class dry wine. As long as there are people like István Szepsy and Zoltán Demeter and as long as you buy their stuff!

* Zeolites are a very porous mineral and they form where volcanic rocks and ash layers react with alkaline groundwater. Zeolites can act as water moderators, in which they will absorb up to half of their weight in water and slowly release it under the plant’s demand. This can prevent root rot and moderate drought cycles.

** There are less than 3,000 bottles of István’s Szent Tamás. Not easy to find, nor cheap. But who said life is easy?

By Niklas Jorgensen published on XpatLoop.com with the permission of Wine Virtuosity