Weekend Escape From Budapest To Berlin 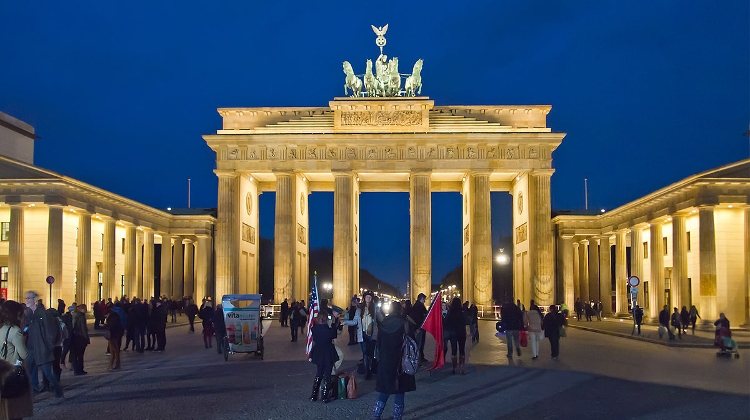 Berlin is one of the sunniest cities in Germany, enjoying warm summer days around 25-30 degrees Celsius between June and August. It’s also one of the hottest cities in Europe for style, culture and vibrancy.

Now well and truly united it’s a hot-house of innovation making it one of the fastest developing capitals. To explore the modern side of the city, while appreciating Berlin's historic roots, I found the districts of Mitte, Charlottenburg and Tiergarten to be really rewarding.

When visiting just for a weekend, and for the first time as I did recently, make it a long weekend to have the best chance of seeing everything of interest - including all the landmark attractions such as the Radio Tower, Brandenburg Gate (pictured above), and the remains of the Berlin Wall.

What once was two separate cities is now one cosmopolitan metropolis that successfully blends the old and new. I flew in early on a Friday morning eager to explore both sides of the city, the former East and West, historic and modern, both in sunlight and after-dark.

Arriving into Tegel - currently the official international airport of the three Berlin airports - I grabbed a three day travel card for around 20 Euros and jumped on bus TXL to get into the city. Overall the cost of living in Berlin is very reasonable – folks in the know say it’s below the level of other major German cities, and about 70% of that in Vienna.

Inexpensive beer gardens and sausage stands abound, yet there’s far more to try than those clichés - enjoyable as they are. Eating out is joyfully varied, from high-end German delights at decent prices, to excellent cheap and cheerful Thai joints such as the ‘GoodTime’ chain of restaurants.

For shopping you can follow the local lead according to your taste. For West Berliners the place to go for department stores and designer outlets - such as Chanel, Gucci and all - is the Ku'damm. In the old East shopper-holics are spoiled these days by trendy choices, for example the district of Mitte has plenty of artsy boutiques.

Mitte is also home to must-see attractions like Alexanderplatz, with its sky-scraping Radio Tower. The nightlife in this district is also becoming world famous. ‘Weekend’ is the club of the moment for Berliners in their late 20s and 30s, especially for ‘after-club’ action and sunrise watching. Actually open from Thursday to Saturday, it’s at 5 Alexanderplatz, Mitte, just hop in a lift to the 12th Floor. Two other after-dark venues worth a mention here are Solar and Felix.

Be sure to check-out Museuminsel before any big nights-out, it’s an amazing focus of world class museums - all based on a single island. While in the east side, perhaps to cure any hang-over, take a stroll down the wide expanse of Unter Den Linden. You can sense all the history as you approach and then pass through The Brandenburg Gate, the symbol of the city.

The mascot of the city is the bear, and you can find decorative ones all over the capital. For example "James, The Butler" is the Berlin Buddy Bear that represents the spirit of a quality hotel where they're ready to 'stand on their heads for guests'. 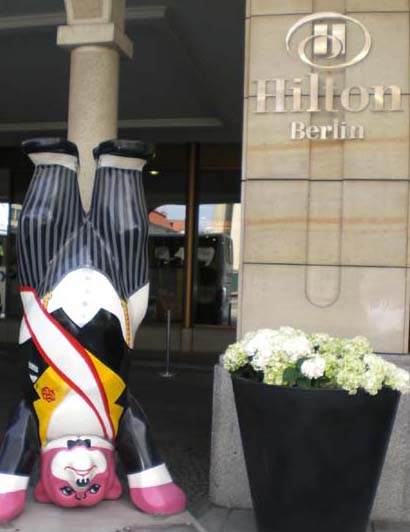 Staying at the Hilton Berlin Hotel was a treat - situated at the historic Gendarmenmarkt, "one of the most beautiful squares in Europe" - lucky guests enjoy views of the city Konzerthaus and the French and German Cathedrals. At the end of each day it was so good to have a dip in the hotel pool, and relax in the spa before starting a night-out.

The Hilton offers a couple of very different yet popular Berlin eateries. One evening its worth popping into Trader Vic's Restaurant to try French Polynesian specialties from the unique Chinese smoke oven. Choosing a lunch menu at the other venue is a great way to sample regional German dishes at Restaurant Mark Brandenburg.

With a metro stop right outside the hotel it’s easy by public to get from the Hilton to see the best preserved part of the Berlin Wall in the area of Kreuzberg. Checkpoint Charlie (pictured here) is just a short walk along Friedrichstraße from this friendly five-star property. 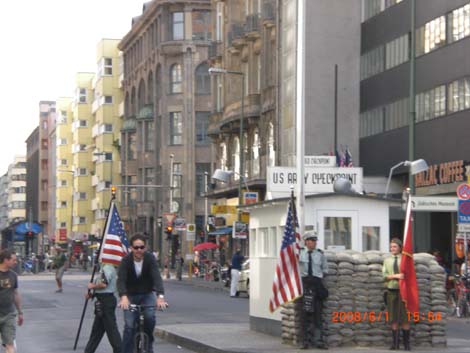 Based at the Berlin Hilton it was easy to venture out and discover other fascinating districts in the east, such as Prenzlauer Berg. If you go there its worth visiting Kollwitzplatz to enjoy the coffee culture and chatty vibe.

Many Berliners speak English to some degree, so fear not if you don't speak the local language since getting advice from locals is straight forward enough. Around 3.4 million of Germany’s 82,369,548 people live in the capital. It was refreshing how genuinely friendly everyone was that gave directions, served in shops; cafes; restaurants and the like.

Doing Berlin by public transport is simple, with one ticket for all methods of transport including the metro and trams it’s a easy to get around the whole town.

Families may wish to use public to get to the Berlin Zoologischer Garten - the oldest zoo in Germany, located in the West of the city. It’s especially worth a visit in summer, as one of the largest in the world there are around 1,400 different plant species and about 15,000 animals to see. Open daily from 09.00-18.30 the entrance is only 10 Euros with discounts available.

Many visitors, particularly those with serious budgets, may prefer exploring the west of the city. Charlottenburg, in what was once the Allied half of the city, is home to many of Berlin's most luxurious hotels. And it's here you’ll find the luxury Western side shopping malls, and the Kurfurstendamm - Berlin’s version of Oxford Street. Culture vultures will surely enjoy the resplendent Schloss Charlottenburg Palace.

Also in the west of the city is the leafy district of Tiergarten. As well as its relaxing park of the same name, Tiergarten offers several sizzling summer 'beach bars' along the river side (pictured). 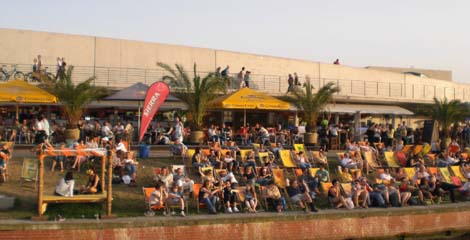 This district is home to key attractions like the Reichstag, Berlin's parliament. Also worth a wander in this area is Potsdamerplatz. Its amazing history combined with the cutting-edge Sony Center made it an enthralling end to Sunday afternoon, and my stay in Berlin.

What a long weekend it had been, exceeding all expectations even considering all the positive Berlin buzz I'd heard. Returning again soon is a must. In case you’ve haven’t traveled there yet, my advice is to go! For starters just vist  Berlin.de/English to check-out the sizzling selection of upcoming events in one of the hottest capitals around today.