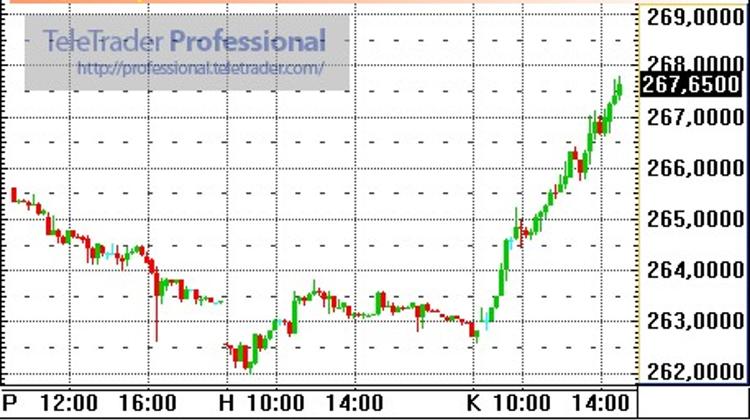 Standard & Poor's has just announced that it cut Greece's ratings to junk status, lowering the country's long-term sovereign credit rating to BB+ from BBB+. The outlook is negative.

"The downgrade results from our updated assessment of the political, economic, and budgetary challenges that the Greek government faces in its efforts to put the public debt burden onto a sustained downward trajectory," said Marko Mrsnik, an S&P credit analyst, in a statement.

Orbán told a press conference on Monday that they would like to be proud on institutions like the PSZÁF and the NBH but the latter should not be a shelter for "offshore knights", referring to Simor who had a business on Cyprus and he transferred HUF 800 m (roughly EUR 3 m) wealth there last year. At the end of 2009, he sold this company.

There were several suggestions about the replacement of Simor in the last months so it is not a fully unexpected approach now, noted Dávid Németh, analyst at ING Bank in Budapest.

Simor was appointed for a term of years in March 2007, so his mandate will expire in early March 2013.

"We had originally dismissed such comments during the election as populist rhetoric. They [Fidesz] also have more important debates to have with the market, such as around prioritising growth over fiscal consolidation," Down Jones cited Nomura economist Peter Attard Montalto as saying on Tuesday.

"Simor was a key part of that and markets warmed to his linking of currency, monetary policy and financial stability--a triad of issues that are still very relevant," Montalto said.

The government cannot sack the Governor of central bank, but there are a couple of possibilities to replace him, Németh said.

1) "Fidesz can continue the discrediting campaign, which can end up with Simor’s resignation or the mood and the fight can last in the remaining three years (something similar than in between Zsigmond Járai, former NBH Governor and the Socialist Party between 2003 and 2007)."

As the four outsider MPC members’ mandate will expire in March 2011 (they were appointed by Socialists) they could be replaced by economists who are closer to Fidesz, the analyst added.

2) "There will be an agreement between Fidesz and the Governor and Simor may get a new position" (something similar happened with Ákos Péter Bod at the end of 1994).

3) "Fidesz can change the central bank law, but it is controlled also by ECB, so they may have to make an agreement with them as well. One option could be if they merge the NBH with Hungarian Financial Supervisory Authority as a part of stricter and more efficient control over bank system. In that case they can appoint new leaders and maybe also a new Monetary Council, but it would take several months to bring it into effect."

It is not evident that who could replace Simor, but Németh believes one of the most likely candidates is György Surányi (he was the governor of NBH between 1995 and 2001 and he introduced the crawling peg depreciation system as a part of economic and fiscal policy adjustment package).

Surányi criticised the central bank’s pre-crises policy last year and he prefers weaker forint exchange rate to a strong one.

The analyst believes another candidate could be László Urbán, currently Deputy Director at the European Bank for Reconstruction and Development (EBRD). "New members of the MPC could be i.e. István Hamecz (he was the managing director of NBH till 2007 than he became the director of OTP fund) or Peter Heim (director if AEGON fund from 2004 till 2009)."

"The main question will be that how transparent the NBH will be in the future," Németh said, pondering whether the bank will retain its independence or will it "attend the government."

"It is more likely that NBH would prefer a relatively weak exchange rate, so we maintain our view that HUF can remain around 265 against the euro in 2011 and 2012 as well. On short term the uncertainty and the fight may increase the volatility of the currency and we still see risk that HUF can cross 270 against euro in the following weeks," the analyst concluded.

Bad for the HUF, Hungarian assets

Economists in general are concerned that the rising tensions between Fidesz and the central bank could potentially have a negative effect on Hungarian assets and the monetary easing cycle.

The highly risk-sensitive forint has fallen further than its peers.

The HUF dipped this much (by 1.6% to around 268 vs. the euro) the last time in December 2009, which makes it a clear underperformer in the region. The HUF opened today’s session at around 263 against the EUR and depreciated to around 268 in the afternoon as a result of extreme tensions in southern Europe, Hungary’s government debt that is the highest in the region and Fidesz criticising the central bank chief. The current level marks a three-week low for the HUF.

Looking at the performance of CEE currencies versus the euro over the past five trading days, the forint has not fared much differently from Poland’s zloty, while the Czech koruna still managed to firm.

Barclays Capital expects that the issue, if it turns sour, could bring the central bank's 10-month cycle of key rate cuts to an end.

"If the political 'noise' continues to add risk premium to forint assets, the Monetary Policy Council will have a reason to halt the easing cycle," Dow Jones cited Barclays Capital economist Christian Keller as saying.
Keller added that any forced change in the current NBH management could trigger market volatility as financial market participants have confidence in the current central bank executives."