Hungary Stands Out In The European Union 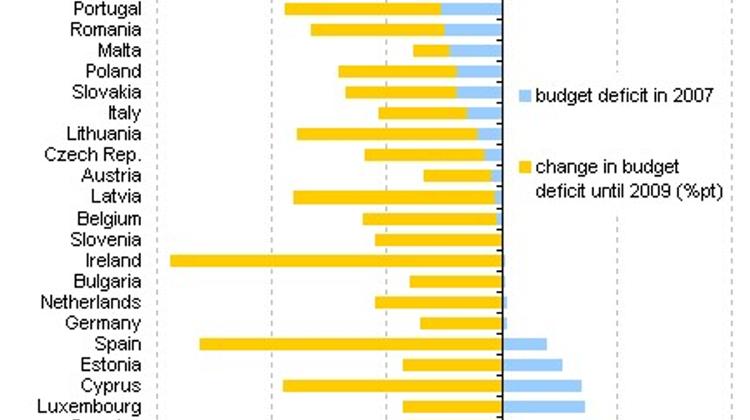 "The European Union has broken up into four or five well-definable groups with respect to the health of their economy and the fiscal policy they had chosen to adopt in a bid to remain standing amidst the strong winds of the crisis. Hungary is not in any of these.

Hungary is in a uniquely strange position within the European Union. According to recently published data Hungary was the only one of the 27 EU member states that has managed to reduce its general government deficit since the onset of the crisis in 2007. The chart below clearly demonstrates that while every country let their respective purse strings rather loose, Hungary has just kept on narrowing its budget gap.

The reasons have been obvious for quite some time now. In early 2008 when the crisis had not started to make its impact felt in Hungary yet, the budget deficit decreased as a result of the fiscal adjustment pursued since 2006. But along came the crisis and the country’s vulnerability - which stemmed from its massive government debt - left no choice for the public sector but to adjust to the financing difficulties.

Now it’s time for the third stage in the adjustment process, because Hungary should lower its budget deficit to or below 3.0% of GDP in 2011. As opposed to the previous efforts, this should not take such drastic corrective measures, or at least Hungary will not be the only country that pursues rigorous fiscal policy. Amidst the expanding European sovereign debt crisis most EU countries are forced to implement radical austerity measures to correct their flawed budgets.

In this regard we should take a look at what position the economies started from before the crisis hit and with what budget status they will start the adjustments now. As you can see in the chart below, we can differentiate between several groups.

In the top right corner you find the countries that are regarded as the epitome of the euro zone. Oddly enough, only two of them (Luxembourg and Finland) adopted the single European currency. These countries accumulated handsome budget surpluses in the pre-crisis era of swift growth (as the horizontal axis indicates), meeting the related requirement of the Stability and Growth Pact. This stipulates that the member states must strive to achieve a balanced budget. Moreover, they should aim for a surplus if the business environment is favourable and a deficit is allowed when the business cycle is on a downward path. Or to put it more technically: the cyclically adjusted, i.e. structural balance should be zero percent.

Needless to say, it is extremely hard to assess how much better the business environment presently is than it is projected to be in the long run. These countries, however, evaluated their situation correctly. What more proof do we need than the fact that despite a massive anti-cyclical expansion their deficits remained below the 3.0% of GDP Maastricht cap (see the vertical axis). This was obviously the hardest to achieve for euro zone hopeful Estonia that was forced to take drastic measures not to ruin its deficit number when the Baltic bubble burst.

A group of eight countries were in an apparently disciplined and balanced position when they had to face the crisis. By 2009, however, their budget deficits swelled to over the Maastricht threshold, as the recession ate into their revenues and they had to adopt anti-cyclical fiscal policies. From the CEE region, the Czech Republic, Slovenia and Bulgaria belong to this group. It may not come as a surprise that Italy, which is often labelled as a crisis-prone economy, also classifies based on the fiscal positions.

Going from bad to even worse

The third group in our rather categorical categorisation comprises countries that "maxed out" their budget deficits before the crisis while still observing the 3% cap. These are typically those countries that were totally wrong about their actual budget position. As a result they had absolutely no manoeuvring room so it was inevitable for their deficit to skyrocket during the crisis. We are not surprised to find debt-ridden Portugal here, or Romania that had to resort to IMF bailout or France that is not on top of its game, either. What is surprising, though is that Poland, which was the only economy in Europe that avoided recession, did not show much abnegation and Slovakia also let itself go quickly after its euro zone accession.

Lithuania and Latvia should in theory be members of the previous group, as their budget positions were acceptable only on the surface. In fact, due to their overheated state these countries should have accumulated even bigger surpluses than Estonia before the crisis. So when the global predicaments burst the bubbles, they did not stand a chance and a GDP contraction of about 20% led to a balance deterioration of massive proportions.

Countries in a critical state

The four countries that are up to their necks in trouble are a more heterogeneous group since their starting positions were extremely different. The crisis dealt a severe blow to Spain and Ireland - especially to their real estate markets - which explains why their budget balances changed so radically. The UK was not too well to begin with and Greece was trying to conceal its dreadful fiscal position even before the crisis as long as they could.

In summary, we can see that while in 2007 only Hungary and Greece were unable to meet the 3.0% of GDP Maastricht deficit criterion, there were already five countries that failed to do so in 2009. As we have mentioned before, Hungary is the odd one out in the EU, given that it was the only country that tightened its budget. At the same time we cannot deny the fact that the previously pursued loose fiscal policy did not let Hungary make further than the stronger section of midfield (with the 10th lowest deficit), while Europe was spending like crazy."