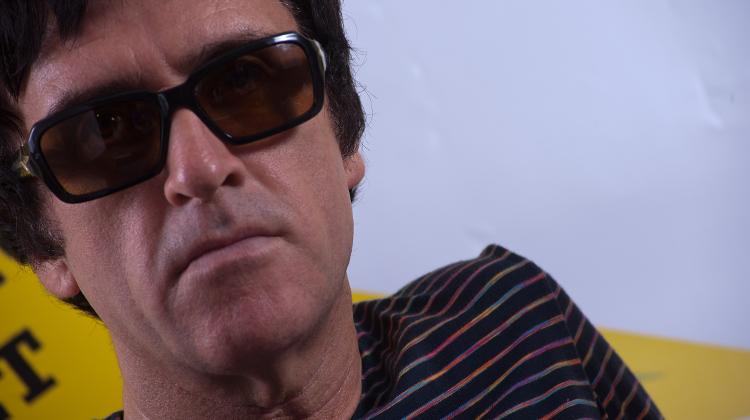 "The Cribs, one of the favourites of the British indie-scene, already played an incredibly successful gig at Sziget two years ago. This year The Smiths-legend Johhny Marr – now officially the band's fourth member – answered our questions.

Johnny Marr: It's great to be in Hungary, it's my first time here. Budapest seems like a stunning city, we saw a couple of things last night and also today.

Talking of Hungary, one of my colleagues showed me a video from last year where you play in Portland, and you are are wearing a t-shirt with a Hungarian crest on it.

As a matter of fact, I'm not very fond of the British flag. On one hand, it's ugly, on the other hand it's somehow associated with idiots (laugh).

Two weeks ago, you played in Japan and America. How did these gigs go?

JM: Our greatest gig was probably the one at the Lollapalooza festival in Chicago. The best thing about live shows is that you never know what's going to happen in the next minute. Everything is interconnected: the mood of the audience, how the band members are feeling, what's the weather like, or the stuff that is going on in your mind. There is always something exciting about playing at a venue for the first time.

Even after The Smiths, you remained an active part of the music scene... (this is where Johnny interrupts the question before me finishing it...)

JM: Yes, I never quite stopped with these things, even before The Cribs and Modest Mouse, I took part in the making of several albums as a producer. Music has been the most important thing in my life since I was fourteen. And I know what it's like to be in a band. A band should function as a team, co-operating with each other. This is a whole lot more important than having outstanding personalities in a band. If you go to a The Cribs-gig, you are not going to say „hey, this Johnny Marr and a couple of other guys did a fine job”, but you will think of the band and how great they were on stage together. The thing is that you must be good as a team.

When it comes to The Cribs, I guess it's important that the band was founded by three brothers.

JM: Indeed this means a lot, yes. They have an unbelievable telepathy going on between the three of them, both music-wise and as persons. They started playing together when they were really young, so they saved a lot of time with this. Everybody always knows what the other is thinking or what he would love to do, and that makes things a whole lot easier. Most bands have a hard time communicating with each other, members have a different way of thinking, so they do not get along with each other. In a family, on the other hand, everyone understands the other, and this is really true when it comes to them, so I guess we are lucky.

You used to be a part of the events thirty years ago as well as you are a part of it nowadays. In what ways do you think the music scene has changed throughout the years?

JM: A lot has changed, really. Nowadays anybody can get financial support, it's a whole lot easier to be young these days, everything is about these young bands. Another great change is the wide availability of television, because it made alternative culture available for everyone. When I was in my teens, I remember a friend telling me that there would be dozens of television-channels in the future, broadcasting music day and night. I was totally stunned when I heard this, it seemed to me like a dream. And then, what you see now is just a bunch of bad musicians.

Of course, there are some great bands, but they actually represent a rather small percentage of this thing called „alternative”. And yes, the underground scene, on the other hand went through a lot of change, too. Still, I love living in this modern world, it's just that I had to learn how to filter things.

There are just too many things you don't need at all. Now any technical device or even a certain brand of shoes can have their own magazin or website. Young people get to experiment with a bunch of unnecessary stuff, in a cultural sense, too. Cultural noise levels are pretty high in the heads. I've been going my way for a long time, so I definitely wouldn't like to be a part of such manipulative things.

And what do you think of the fact that the guitar-scene focused on the classics of the past decades is catching up fast?

JM: I think this really is a great thing. My life was accompanied by Pink Floyd, for example, and it was damn boring to watch them and all those same old faces again and again. It's great when there are new bands to listen to that can turn into role models, just think about Radiohead. And the truly great thing is that there are several great new guitarists.

I listen to a bunch of new bands on Myspace or other websites, and I must tell you that there really are some terrific guitarists out there. Of course, one could say I might have been a major influence for some of them, but then there is Johnny Greenwood, or Nick Zinner from Yeah Yeah Yeahs, they already are role models of the new era. And this is a great thing, you know, because when I was a kid, everyone used to play the same shit in the same old way which was incredibly boring, needless to mention.

How did you end up being the guitarist of The Cribs?

And you became an active part of both bands.