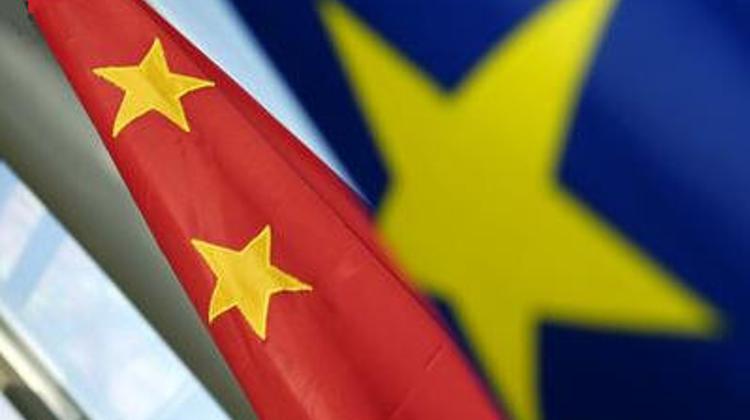 As I'm looking through my files it seems as if almost nothing has happened in Chinese-Hungarian relations in the last six months or so. It was in mid-November 2011 that Tamás Fellegi made his last trip to China where he negotiated with Chinese businessmen and bank presidents. After that not much could be heard about major Chinese investments in Hungary. The only things I can recall are the establishment of one medium-sized Chinese-owned factory and the setting up of a Chinese Department at the University of Miskolc.

But now China is back in the Hungarian media with a vengeance. In two days MTI released five reports on the newly blossoming Hungarian-Chinese relations. MTI even managed to report on a Le Figaro article on East-Central Europe's special role in Chinese-European relations. They also found an article in China Daily that specifically noted that "Beijing has confidence in Hungary's economic growth."

Looking at the Poland-Central Europe-China trade summit in Warsaw from the perspective of Budapest one would think that Viktor Orbán was the leading light of these negotiations. It is true that MTI mentioned that the Hungarian prime minister attended a meeting where "other heads of East European governments were also present" but they neglect to say that it was a gathering of sixteen prime ministers in addition to the Chinese premier Wen Jiabao.

It was a large affair with three hundred Chinese firms in tow and 450 companies from across the region, including 300 from Poland. From these numbers it is clear that the main player was the host country, which has the largest economy in the area.

Did Viktor Orbán have any role in organizing this summit? Perhaps. The Hungarian prime minister often talked in the past about a kind of mini-union in Eastern Europe that would include Poland, Slovakia, Hungary, and Croatia. This "axis," as he called the alliance of these countries, was viewed as a cooperative framework for developing the region's economies. For example, he often talked about building out the infrastructure of the region from the Baltic to the Adriatic. It seems that China is willing to be a major player here, agreeing to set up a $10 billion credit line to support infrastructure and green-economy projects in the area.

It is also true that Orbán was interested in China as an economic player, but he envisaged Chinese economic penetration via Hungary and wasn't thinking in terms of the whole region of sixteen countries. He wanted to be the chief player and not just one of many.

The current trade summit is different both in scope and in geography from Orbán's earlier ideas although it definitely fits in with his conviction that Europe is declining and needs the infusion of Chinese capital. Orbán's speech at the round-table discussion emphasized the indebtedness of Europe, which can be remedied with the assistance of China. In his usual overstatement of facts he claimed that Europe's current problems can be compared only to the rebuilding of the continent after World War II. "In a new world new allies are born."

As I see it, the Chinese have something else in mind. Although Wen said that "we have to face [the challenge of an uncertain global economic recovery] together," the Chinese are seeking investment and bilateral foreign trade opportunities. Other than through their contributions to the IMF, they are not helping European governments free themselves of their indebtedness. As far as I know, they are not big players in Hungarian government bond placements.

As for allies, sometimes Orbán doesn't seem to be aware of the meaning of words. The last time when Wen Jiabao visited Hungary he talked about a "strategic alliance" between China and Hungary that raised quite a few eyebrows.

Orbán also met Wen Jiabao alone, and after the meeting he announced that in the future "China might become the most important actor in Hungary's economic life." Considering that currently Hungary's trade is almost exclusively with the countries of the European Union, such a turnabout would be dramatic indeed. According to reports, China wants to double its bilateral foreign trade with the region in five years. That projection is unlikely to propel China to the top spot among Hungary's trading partners.

Last night Péter Szijjártó informed the Hungarian public on MTV's Az Este (The Evening) about the events and the accomplishments of the Warsaw trade talks. He also announced that Viktor Orbán will be visiting Beijing in the second half of the year. This morning the prime minister reaffirmed that the Chinese are expecting him in Beijing. He added that he has been working on closer Chinese-Hungarian relations for years.

"We are close to the fruition of our labor." He added that Li Kequiang, the deputy prime minister of China, will be visiting Hungary next week when further economic agreements will be signed. He didn't elaborate on the nature of the agreements.

Orbán's critics often pointed out that he first tried to attract Russia as a major player in the Hungarian economy, but it didn't matter how often Tamás Fellegi visited Moscow the only result was that the Russians managed to get rid of their MOL shares at a very good price. Then came the China card. Several trips to Beijing resulted, until now at least, in very little. There were trips to the United Arab Emirates and Dubai but the emissaries came back empty-handed.

This time around there is perhaps more of a chance of success, although it will be difficult for Hungary to compete with countries like Poland, the Czech Republic, Slovenia or even Slovakia for investment opportunities. But even if more Chinese investment arrives in the region it is unlikely that it can trump investments from the West. Yet, it is quite clear from what Orbán had to say in Warsaw and this morning in Budapest that this is what he would like to see happen.