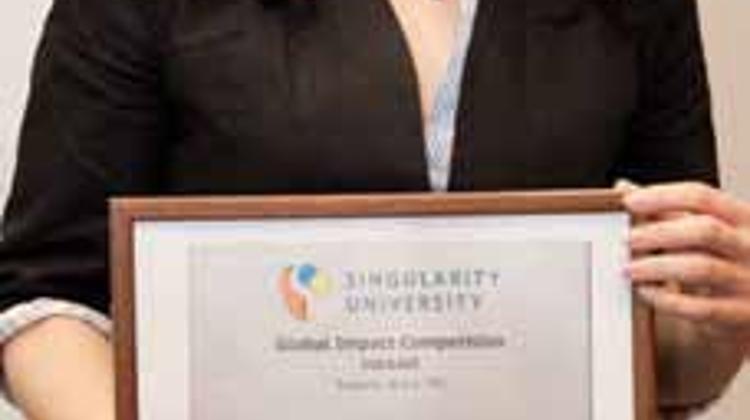 The winner of the region’s first Global Impact Competition will benefit from a 10-week $30,000 course at the Singularity University and software worth $10,000 from Autodesk, but thinks the most important thing she’ll get from it are contacts.

It is important to grow fast and for that you need support,” says Priszcilla Varnagy, the CEO, co-founder and game designer of Be-novative. Just minutes after having learned she had won the Singularity University (SU) competition, she was already casting its potential benefits into the future.

“My goal was quite clear from the outset,” she says, speaking immediately after the conclusion of the competition. “I want to establish contact with all those connected organizations and people. I want to learn about future ways of using technology, learn about where we are, what level we are at right now, by talking with other designers.”

Be-novative is a social brainstorming startup that aims to conquer real- life challenges with creativity and education. Varnagy and business partner, co-founder and CTO Istvan Marhefka actually formed two companies, one in Hungary in July 2011, the other in the US in August of the same year. “We already knew the concept would be to get the software developed in Hungary, but that we should also have an HQ in Silicon Valley because of the connections.”

SU’s Global Impact Competition deliberately had a tight time frame. The idea was only announced in March. “At first there was an application made on paper, just a few sentences, which I gave a couple of hours’ thought too. When we got into the finals, I knew I had two weeks to focus on the presentation. I have re-written every word of it at least four times.

The test presentation I made to TEDxDanubia last week was basically completely different. They told me it wasn’t focused, that they didn’t know what the application was, and I thought, ‘OK, I’ll show you what it is’. So this presentation is less than a week old.” As part of the presentation training, each finalist was also given two mentors: Patrick McCullough
and David Trayford. “I have a lot to thank them for; they gave me a lot of advice and were always ready to answer my questions.”

Be-novative’s current application, which has both corporate and gaming versions, is still being developed, but Varnagy says she and Marhefka are determined their company won’t be a one-trick pony. “Just yesterday we were talking and Istvan said he had an idea for a platform to help people develop new good habits or lose old bad ones, like gamifying quitting smoking….

That’s our job, as entrepreneurs, to constantly be thinking, trying new ideas.” She says they envisage a “Google-like mentality” for the business. “Everybody must be able to share ideas if we are to go forward. We want to keep it flat, not hierarchical, with lots of collaborative teams.” We talk about failure, and the need to embrace it rather than be fearful of its consequences. “We are also prepared for failures,” she insists. “Failure simply means you need to turn again, that’s part of the journey.”

When exactly that journey began can be answered in several ways. Was it the founding of the companies last year? Or how about back in 2009, when Varnagy started at the TREBAG Innovation Lodge as a researcher/ developer, working on a European life-long learning project? “The owner saw some potential in me, and gave me a month to write up a 200 page proposal of my choosing.

He told me my idea was really interesting, and this area was called open innovation, although the field still hadn’t been developed properly.” It was the first time she had heard the term, but it was also the germ of the current application. Ever since then, she has been “polishing” the concept. (The idea is deceptively simple. A corporation posts a genuine challenge, a problem it is trying to overcome.

Small competing teams of players then brainstorm a solution to all or part of the challenge, with the whole community ranking the ideas. It brings together concepts like crowd sourcing and gaming and dripfeeds them into problem solving.)

But the journey probably started back when she was two. She was asked what she wanted to do when she grew up, and has been told her answers centered on discovery and exploration. “I do not remember the words I used, but I do remember the passion.”