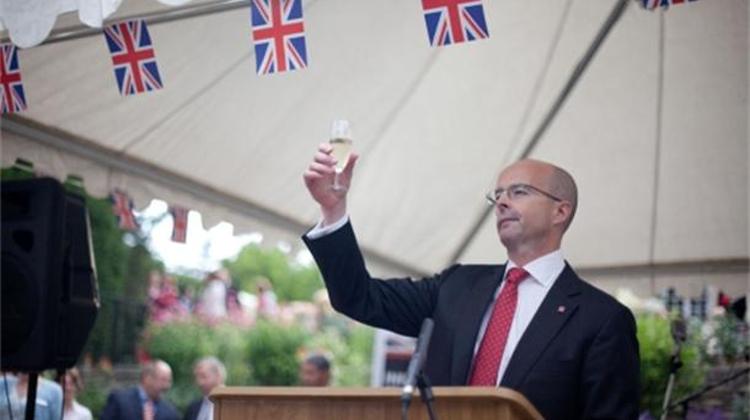 I’ve wanted to blog about our Queen’s Birthday Party for a little while now. But first we got very busy in the Embassy with preparations for the European Council and then I went down to the Balaton for a couple of days. Now things are a little more back to normal and I’m catching up.

I was really happy with the party. The preparations ran like clockwork: the marquee in the garden went up smoothly; wheelchair access was arranged; the catering went according to plan; even the weather was kind to us: it didn’t rain and the temperature was very comfortable.

Then the guests arrived. We had invited over a thousand contacts and friends of the Embassy and about eight hundred came. It was great to be able to welcome so many to the party, including many senior business, government and political figures who had taken time out of their busy schedules to celebrate with us.

As I said when I spoke, the best speeches at national days are like men’s haircuts: as short as possible. So we tried to keep the formalities light. But I did want to recall the two reasons we have to celebrate in the UK this year: the London Olympic and Paralympic Games and the Queen’s Diamond Jubilee. I reminded everyone that while Hungary was the most successful Olympic water-polo team ever (with 9 golds), the second was Great Britain with 4 (albeit the last won in 1920). I also said a few words about the Jubilee, the celebrations in London and the way in which the Queen’s role had developed through her reign, helping make her a continuingly relevant part of modern Britain.

We had decided to try to make the celebration as fun as possible, so we had arranged a Beatles tribute band (from the Centrál theatre) to play a set for us. Again appropriate since the Beatles are the best selling band during the Queen’s reign. They were really good. And I got to do a little Dad dancing to “Twist and Shout”. And it was a nice contrast to the equally excellent Bolyai János quartet who had played the national anthems for us.

The whole thing went very well. And I’m grateful to the Embassy team who worked so tirelessly to make that happen. I’m also grateful to our sponsors. Without the support of our Gold Sponsors: Vodafone, Tesco, Diageo, City & Guilds and BUPA Medihelp, we would have struggled to put on such a good show.

So our challenge next year is to do something even better. Let me know if you have any ideas.

Click here for the photo gallery of the event