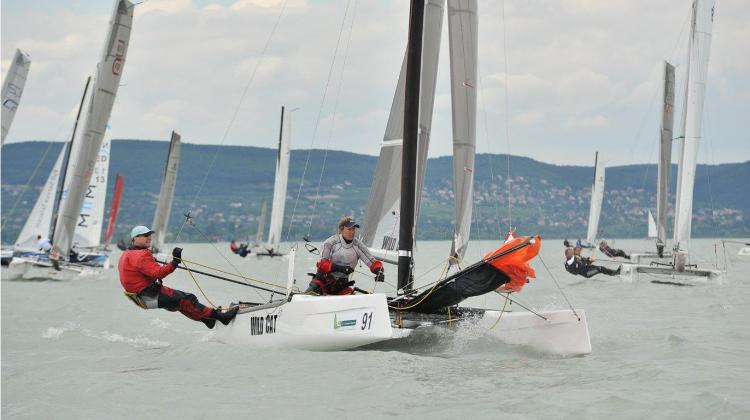 The Hungarian Yachting Association has been guiding and governing the Hungarian sailing life since 1929. The main competitions organized by the Association including international races (European or World Championships), national championships, big boat series or long-distance races including the international Kékszalag (Blue Ribbon) Round the Lake Competition are attracting more and more sailors and participants every year.

The longest lake competition for big boats in Europe is sailed on the following 155 km course: Balatonfüred – Kenese – Siófok – Tihany – Keszthely – Balatonfüred. It is a traditional race first held in 1934 and sailed just every second year. Because of the II. World War the race was cancelled in 1944. After the war the round the lake competition was first hold again in 1947 then organized every odd year. In 2001 the Kékszalag became a yearly event.

The course record of 10 hours 40 minutes was sailed in 1955 in ideal weather conditions by the Nemere II. 75 sqm Skerry Cruiser skippered by the late Istvan Nemeth. The most succesfull skipper in the Blue Ribbon’s history is Farkas Litkey by ten wins.

The number of the competitors has been growing year by year. The traditional restrictions on the participation of multihulls, Liberas and equipped with trapeze are gradually demolished in the last few years. 2012 is the second time that multihulls are allowed to take part. After 2014 any kind of sailing boats may race in the Kékszalg except dinghies or multihulls under 25 sqm of sail area.

Near the competition the sixth time organized Kékszalag Festival offers interesting programs for the audience ashore in Balatonfüred.

Part of the Kékszalag Festival is the I. MELANOMAMOBIL TWO RIBBON CATAMARAN REGATTA organized by the Katamarán SE founded in 2003 and helps growing the multihull sailing in Hungary. Katamarán SE organized the first multihull regatta in Hungary, and walked through the path to have the F18 World Championships on Lake Balaton in 2011. (The name Two Ribbon is a pun using the similarity of the hungarian names of Kétszalag and the famous Kékszalag)

The competition for catamarans up to 20ft (M3 class) will be sailed on the following course: Balatonfüred – Balatonfűzfő – Zamárdi – Balatonfüred. The regatta starts at 10:00 in front of the the main port of Balatonfüred.

The overall winner will have the main trophy of the TWO RIBBON and sets the record of this course. The classes will be awarded under the TEXEL rate.