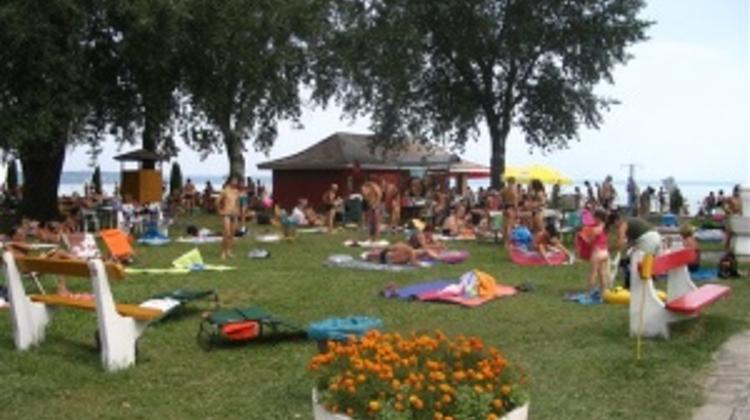 by Trehhuger Dan: Akos and Nori were kind enough to invite me down again to Balaton for the weekend. I have been waiting all year for the seasonal opening of the langos place at the old Budatava Beach in Balatonalmadi. Laliba's langos is the best at Balaton, and second best in Hungary only to the Hunyadi ter langos. We are now recognised as regulars and get special service, not having to wait in line but instead get served through the side door. Ice cold froccs for 260 huf, cheese-garlic-sourcream langos for 500. We also had easily the best corn on the cob I have ever had in Hungary.

The weather and water temperature could not have been better, and the beach was not at all crowded. We went in the water a few times, but mostly drank froccs and hosszulepes at our regular table. Lots of trees, lots of shade and not too many people, I really like this beach. Earlier in the day we visited the Almadi market which has a good choice of food and a big and always interesting flea market area where I bought an awesome straw hat for only 800 huf. I also by chance met Denver Steve, founder of Ignite! Hungary, at the market and took train back with him.

I returned to budatava strand balatonalmadiAlmadi last weekend but the weather was disappointing. It is hard to believe that the water was 28 degrees just 2 weeks ago and now it is 20. Skipping breakfast, we all made the pilgrimage to Laliba's langos after the market. Unfortunately, the langos dough maker was ill and the beach was deserted. While the others made do with hekk from a nearby restaurant, I could not face another plate of french fries.

But Laliba's wonderful staff (I think she is one of his daughters) said that if I were not in a rush they could do me an open-faced toasted sandwich with mushrooms. I did not understand why the long wait, but I was not in a hurry and enjoyed 3 froccses until the massive sandwhich came out. She had actually gone off and bought mushrooms and fried them for the sandwhich rather than dumping vinegary canned mushrooms on it. What a great place! The corn on the cob and palacsinta was also tops again.