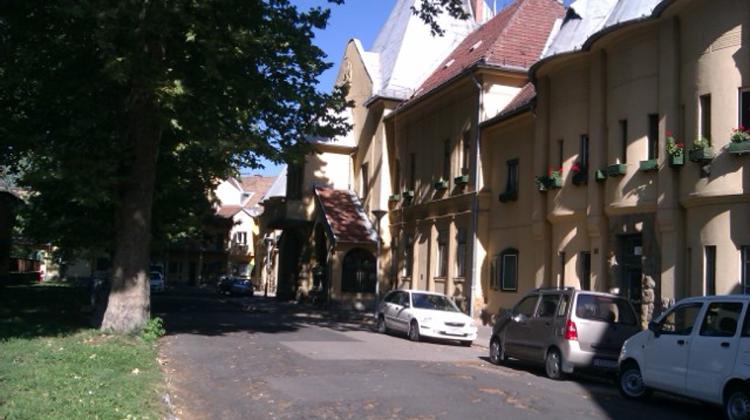 I have been cycling up to Romai Part and Szentendre for years, and have always loved the four water and coal-clock towers at the old gas works. Luckily they have managed to survive (so far) the reconstruction of the old chemical works as an industrial park. In 1908 a municipal decision was made to replace several obsolete gas factories with a single new facility.

The Gas Factory of Óbuda, built between 1912 and 1914 as the last major investment of pre-war era, was one of Europe’s most modern plants to date.The Óbuda Gas Factory burned coal to produce so-called "city gas" used for heating. The factory was in operation between 1913 and 1984 and used the most advanced technology of the time, which made it possible to produce a daily 250,000 cubic metres of gas.

Nearby, between the former factory, the Aquincum Museum and Auchan there is a great big yellow house I have always admired from the bike path. Long squatted, it now has residents that take better care of it, with many small gardens between the house and the road. I only realised this week that it is actually the back of the house I see, and the front is part of what I believe to be housing for the former factory employees.

This little village within a village is well worth a look. The quiet houses are lovely, Hapsburg split-pea yellow with green shutters (with hearts) and window flower boxes. Now derelict, the residents used to even have their own cultural house and outdoor stage as well as a football pitch.

If I were to do it again, I think I would have bought a flat here. Some nice photos of the housing estate here.

Some cool photos of the towers can be found here and here.