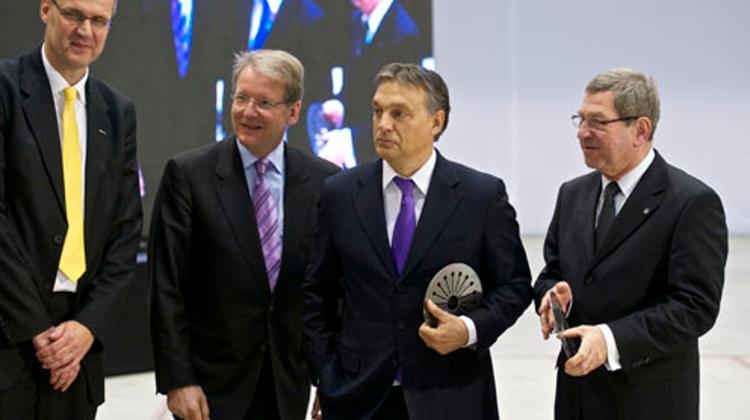 Nearly 700 new jobs will be created with the help of the New Széchenyi Plan at LuK Savaria Ltd. in Szombathely. The factory in Szombathely celebrated its 15th anniversary and its expansion today with the participation of Prime Minister Viktor Orbán.

The Prime Minister stated in his speech that the Hungarian economy has opportunities to expand in the automobile industry. Referring to the Mercedes and Opel investments in Hungary, he said that the corner points of a new car industry triangle have been established. He emphasised that the Hungarian Government always welcomes with respect companies that see an opportunity in Hungary and do not solely seek rapid financial gains and market penetration, but also view Hungarian companies as partners.

Defence Minister Hende, who was present at the event as Szombathely’s individual Member of Parliament, announced that within the region Szombathely, Zalaegerszeg, Szentgotthárd alongside their companies and unions have decided to establish the Western Pannon automobile industry and mechatronics centre, through which the region could become the third car, electronic and engineering industry hub after Győr and Kecskemét. The Government supports this initiative, he added, stating that their goal is to have 25000 new jobs and attract 1 billion euros worth of new investments.

The company – a member of the German Schaeffler Group that deals primarily with the production of clutches and flywheels – will open a new twenty thousand square metre production hall in Szombathely. The total cost of the investment is 3.3 billion forints, out of which 1 billion forints will be covered by grants from the New Széchenyi Plan. The company will install press machinery, special tempering-furnaces and various emulsion and cooling equipment in the new production hall using state-of-the-art technology. Every fourth new car in Europe is equipped with clutches produced by the LuK Group thanks to the high production quality, the low number of errors and the continuous development.

With approximately 74,000 employees worldwide, Schaeffler is one of the largest German and European industrial companies in family ownership. With 180 locations in over 50 countries, Schaeffler has a worldwide network of manufacturing locations, research and development facilities, sales companies, engineering offices, and training centres.