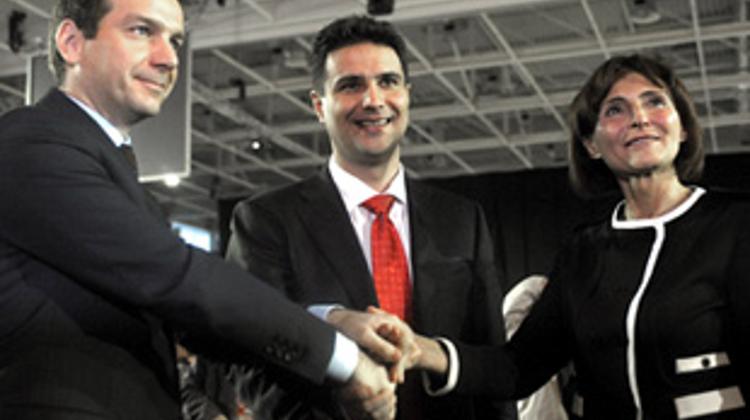 Commentators ponder the possible impact of Gordon Bajnai’s plans to create a centrist anti-Fidesz electoral alliance. Both left and right-wing analysts are skeptical about the potential success of Bajnai’s rainbow coalition.

After former PM Gordon Bajnai announced the establishment of Together 2014 and called for a broad alliance, the left-wing opposition parties appear hesitant, both about what it actually is, and whether or not to join it. Gyurcsány’s Democratic Coalition supported Bajnai’s initiative, while the MSZP leadership declared that Bajnai has delivered an important symbolic message, therefore the Socialists should consider joining the platform. Some Socialist luminaries, however, noted that a social democratic party should not cooperate with liberal centrists. In a lukewarm reaction, the LMP remarked that Bajnai has so far not distanced himself enough from the previous Socialist governments, and added that the green party will decide later whether to join Together 2014.

There is no cooperation on the left, László Szentesi Zöldi writes in Magyar Hírlap. The right-wing columnist finds it highly unlikely that the rainbow coalition of liberals, socialists and greens will come up with a credible political program. The ideological rifts between these groups are simply impossible to bridge, Szentesi Zöldi believes. As for the electoral balance, Szentesi believes that if the MSZP and the LMP decide to abstain from cooperation with Bajnai, the left-wing votes will be even more divided than they have been till now. But in the highly unlikely event of victory at the next election, the alliance would not be able to govern the country, and the motley coalition government which resulted would soon fall apart, Szentesi speculates.

In Heti Válasz, András Stumpf suggests that Bajnai’s efforts to distance himself from the pre-2010 Socialist governments are not convincing. After all, Bajnai was a cabinet minister under Gyurcsány, whom he later succeeded as the Socialists’ Prime Minister. Moreover, it will be hardly possible for the platform to lure moderate conservatives after Gyurcsány and Gábor Kuncze, former president of the highly unpopular liberal SZDSZ also supported Bajnai, Stumpf continues. Nevertheless, he does not suggest that the platform has no chance at all, for Bajnai’s soft tone and somewhat clumsy and not very professional public performance prove sexy among left-leaning voters.

Interestingly, Ervin Tamás in Népszabadság fears that it will be hard for Bajnai to create the impression of a calm, reasonable and moderate politician, and at the same time mobilize his sympathizers. Tamás wonders if Bajnai’s moderate approach will suffice to overcome the cleavages prevalent on the left.

“The wide coalition which could replace the Orbán government would not be able to govern,” writes Sándor Révész in the same daily, in his commentary on the same paradox. according to the liberal commentator, progressive, pro-market liberals cannot wholeheartedly support the left-wing messages voiced by some of Bajnai’s supporters, and vice versa.