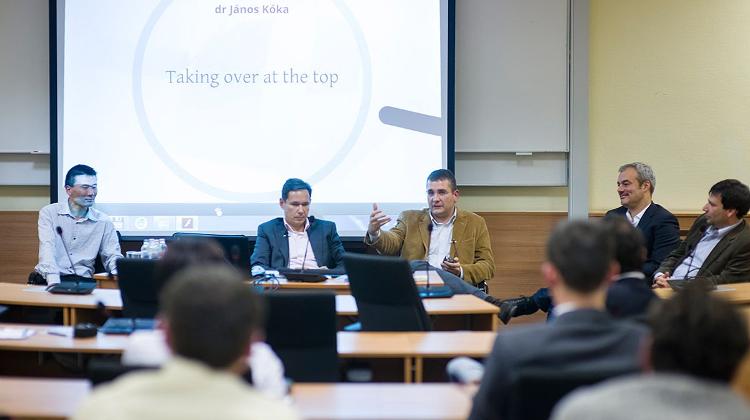 Between the two notions of venture capitalists as either rainmakers who change the fate of a startup the instant they sign a check or as investors whose funding comes at the cost of founders losing control of their company lies a much more nuanced reality. Entrepreneurs and MBA students glimpsed this reality at a roundtable developed by the Institute for Entrepreneurship and Innovation at Central European University (CEU) Business School in Budapest on November 20. The Hungarian Private Equity and Venture Capital Association co-organized the event.

Mel Horwitch, dean of CEU Business School, remarked that it has been one year since the school received a $7.55 million gift from George Soros, its founder, and launched the roundtable series, which is a flagship activity of Institute.

“In-depth discussions like this one provide a sophisticated view of entrepreneurship, and academic institutions are perfect venues for this to happen,” Dean Horwitch noted about the roundtable. Paul Lacourbe, an associate professor of operations management at CEU Business School, was the faculty organizer of the roundtable.

The picture the roundtable’s panelists painted of how a venture capitalist makes a company profitable stands in contrast to what’s often depicted. Rather than aggressive tactics like wiping out a leadership team or radical cost cutting, growth requires that venture capitalists thoughtfully — and often patiently — nurture the qualities that made the company attractive to them to start with.

Peter Tanczos, managing partner at Hungary-based venture capital firm Euroventures Capital and moderator of the roundtable, noted that the characteristics venture capitalists look for when selecting companies to invest in are “conflicting.” For example, leaders must break rules and change the status quo to recognize market opportunities. At the same time, they must create rules that govern company operations. And while they need to have a “helicopter view” of an organization, they also need to manage individuals at the ground level.

Because these traits are “hard to find in one person,” Tanczos said that companies often have successions over time. Venture capital firms invested in companies have an interest in navigating these successions, but, as the panelists described, they must tread cautiously.

“Adding talent is the ultimate challenge for VCs,” Tanczos commented.

The panel’s three venture capitalists illustrated Tanczos’s point with examples of how they helped steer companies through various growth stages.

Iván Halász of Finext described how he ensured one of his firm’s investments was in good financial hands by helping the company hire a chief financial officer. The key, he said, was to find someone who would be loyal to both the investors and to the company. In hiring such a person, and in helping a company function well in general, Halász said that venture capital firms “have to create a framework” for everything to run effectively rather than implement changes themselves.

János Kóka of Cellum reflected on a much more hands-on approach for protecting his investment. He served as the chief executive officer after 18 months of working with a venture in another capacity. He described the experience as rare, and that he benefited greatly from the 18 months of building communication channels prior to becoming the CEO.

Zoltán Kovács of Kirowski described the unique position he found himself in as an investor coaching the company in which he was invested. “The most difficult thing is that you have no way to make the company do what you want it to do,” he said. But that doesn’t mean you can’t have influence. One way, he said, is that “you set the priorities and verbally reward success.” You have to learn how to manage without control, Kovács concluded.