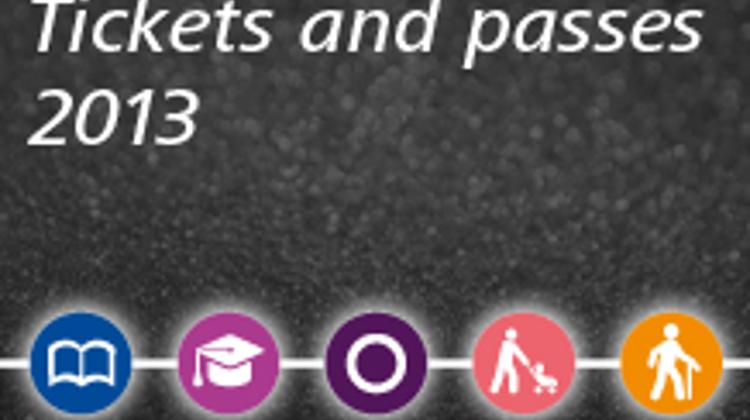 BKK, the transport-organising authority of Budapest is introducing new types of passes and travelcards this year in order to ensure a more cost-efficient and convenient travel experience for our customers. The prices of tickets and passes are increasing in line with inflation, but the price of student and pensioner passes remains the same in 2013.

On 31 October 2012, the Budapest Assembly made a decision on BKK’s tariffs and fares valid from the following year. Based on that decision, the price of monthly passes for students and passengers with small children remains 3,850 Forints, pensioner passes remain 3,700 Forints and the metropolitan area fares (suburban railway and regional buses) also remain unchanged, which means that the prices of discount-fare passes has not increased for the third year in a row since 2010.

The price of single tickets and full-price passes is going to increase. The General Assembly made this decision on account of the fact that local fares have not changed since 2010 in spite of the increase of the inflation and VAT rates. After three years of increasing fuel prices and other costs, the financing of the further reduction of real-term prices of tickets and passes is no longer sustainable. All in all, the net real-term price level of public transportation has decreased more than ten per cent in the past three years when taking inflationary and tax effects into consideration.

The table below shows the 2013 prices of the most important types of tickets and passes:

By purchasing the one-week supplement (2,700 Forints), the validity period of full-price monthly and quarterly Budapest passes can be extended one week. This supplement is primarily recommended, for example, for those passengers whose valid pass is to expire just before their vacation starts and therefore would not like to buy a new pass during those few days. The one-week supplement can be purchased during the validity period of a monthly or quarterly pass by handing in the pass at the ticket office. The supplement is valid from the date of purchase until 2:00 of the 8th day after the day of expiration indicated on the original pass.

From 2013, the validity period of the one-slip annual Budapest Pass (full price, student and pensioner) is no longer a calendar year, but 365 days from an optional starting day indicated at the time of purchase. Advance purchase is allowed but only up to 30 days prior to the start of the validity period. Please note that the annual pass containing 12-monthly slips is not rolling, it is still valid ONLY for a calendar year from 1 January of the given year until 2:00 on 6 January of the following year. The price of the two types of annual pass is the same.

We are introducing two different types of Monthly Budapest Passes for pupils and students at the same price: one type is for pupils in public education while the other type is for students in higher education. The monthly pass for pupils in public education is valid with a Hungarian school ID that does not require validity stickers, but also with IDs requiring validity stickers issued for the school-year. The monthly pass for students in higher education is valid with Hungarian or foreign-issued student IDs. Please find more details here. The metropolitan area and suburban railway passes do not change, both pupils and students need to purchase the same passes as before.

From 2013, in addition to BKK photo IDs and Volánbusz-BKSZ photo IDs, personal photo IDs or card-format driving licences are accepted for identification along with the full-price passes: please do not forget to write the number of one of the IDs above on your pass and present the same ID when so requested by an inspector. Passes are not valid without an ID number and you will be subject to a fine. Please note that the discount-fare (student, pensioner, passengers with small children) passes continue to be valid only with a valid student ID or an appropriate photo ID proving eligibility for the discount.