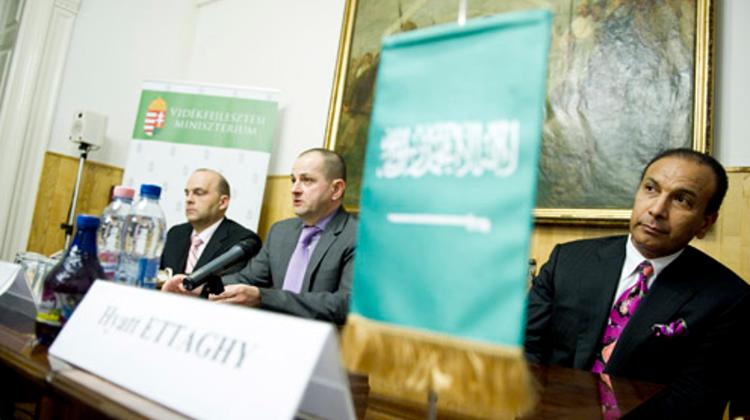 Hungarian mineral water producer Szentkirályi is to begin exporting its products to Saudi Arabia; an agreement was signed in Budapest on Thursday by Export-Import Manager of Szentkirályi Mineral Water Ltd. Tamás Tóth and a Saudi partner company.

Gyuda Budai, the Ministry of Rural Development's Parliamentary State Secretary, was also present at the signing of the agreement, stating that the Government strengthened its ties to Saudi Arabia in 2011, in the spirit of its "opening towards the East" policy. A delegation of Hungarian businessmen lead by the Prime Minister, including the Owner of Szentkirályi, Levente Balogh, travelled to Riyadh in October 2011. After continued negotiations, this is the first cooperation agreement successfully concluded as a direct result of that business meeting, he added.

Tamás Tóth explained that Saudi Arabia is a 23 million strong market, and the first consignment of ten containers – 134 thousand litres – would be shipped to the Near East in March, hopefully followed by several times that amount.

Gyula Budai told reporters that the agreement was an important milestone in the Hungarian Government's policy of opening towards the East, the most important message of which is that in addition to European Union markets, Hungarian products are also entering the markets of countries which have been good partners to Hungary in the past. Saudi relations were rekindled with great enthusiasm in 2011, the State Secretary stressed, adding that kashkaval cheese is very popular in Saudi Arabia, with imports from Hungary increasing by 20 percent in 2011 compared to the previous year.

Tamás Tóth also emphasised the importance of the Riyadh business meeting in 2011 in relation to the conclusion of the new agreement. He also told the press that the company is already present on several Near Eastern markets including Kuwait, Bahrain, and the United Arab Emirates, and Saudi Arabia will be the 45th country to which the mineral water and related products will be exported. he company has recently begun exporting its products to the island of Saint Martin and Panama, he added.

The company plans to ship 1 million litres of natural spring water to the Near East, including Saudi Arabia.

Tamás Tóth explained that the majority of people in the Arab nations drink purified, desalinated sea water, and this ratio is around 70 percent in Saudi Arabia. However, premium quality mineral waters from Europe are gaining extensive ground.

Representing the Saudi partner, Hyatt Ettaghy said that Hungary was full of natural treasures; his company had spoken with several enterprises in several countries and Szentkirályi was the most suited to their requirements.

According to the press materials published for the event, Szentkirályi's capacity will reach 500 million litres per year in 2013, thanks to continuous investment and development. The majority of turnover is generated within Hungary, but exports as also increasing continuously; the company exported twice as much mineral water in 2012 as it had in 2011. Szentkirályi increased its revenue by 13 percent to HUF 6.05 billion in 2011.