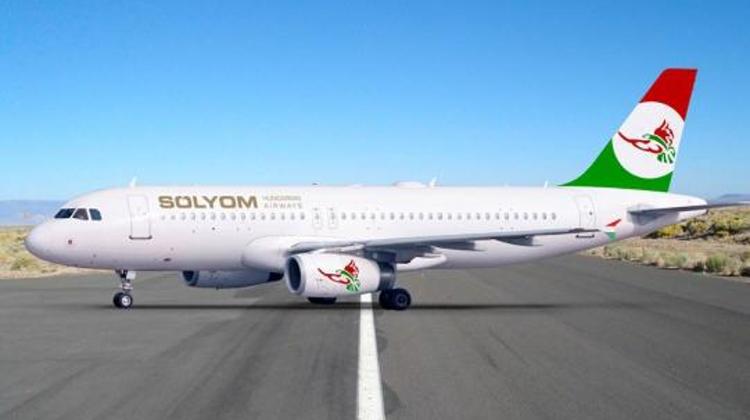 Sólyom Airways, a start-up that was initially treated as a joke, is actually recruiting employees, including pilots. Considering that it currently has but one plane, it is looking to hire only 35 employees. But it took out a full-page ad to recruit them.

Let’s go back to the beginning. It was sometime in early June that news spread that unknown investors are launching a new Hungarian airline. When it turned out that the airline’s CEO in a display of nationalistic zeal was thinking of calling the new company Sólyom Airways, the jokes on Facebook began to pour in by the hundreds if not thousands. Most of the jokes were about the name of the company. After all, no foreigner will be able to pronounce the name, and the meaning of “sólyom” (falcon) will also be wasted on them. Here is a funny video taken by a reporter for Index. The reporter holds up a large piece of paper and asks tourists at the Budapest Airport to pronounce the word “Sólyom.” Most of them settled for something that in Hungarian orthography could be written as Szólium or Szóliom.

Another wave of jokes began to circulate when the Hungarian public learned that the first leased plane of Sólyom Airlines will be called “Álmos.” You may recall that Álmos was Chieftain Árpád’s father who was allegedly sacrificed by his own men just when the Hungarian tribes entered the Carpathian Basin. Not a good omen, if you ask me. I would also be worried about the current meaning of the word: “sleepy.”

Back in early July when the mysterious Mrs. Németh, minister of national development, was asked what the government thinks about this new company, she announced that the whole enterprise “lacks seriousness.” I think that the majority of Hungarians would have agreed with her. Most people would have called it a pipe dream. Starting a new airline is an expensive and very risky undertaking. The public knew nothing about the founder and had no idea whether there were serious investors behind him or not. Why would a serious investor believe that another Hungarian airline could conquer all the difficulties that grounded Malév?

Sólyom will be unmistakably Hungarian, not just in name but also as far as cuisine and hospitality are concerned. Foreign travelers will be welcomed in Hungarian: “Isten hozott!” which Hungarian-English dictionaries translate only as “welcome!” But perhaps the Austrian-Bavarian “Grüß Got!” would give a better sense of “Isten hozott!” Apparently upon landing in Hungary the pilot will announce “honfoglalás,” the Hungarian word for the Hungarian tribes’ occupation of today’s Hungary.

All this sounds a little crazy, but the mysterious CEO, József Vágó, gave a press conference on July 24 and announced that the airline will become a reality very soon. Álmos, the first of the six planes he intends to lease, will take off on September 1. Where is it going? Well, that’s not so clear. He refused to be specific but indicated that the airline will first concentrate on western Europe. His airline will offer full-fledged premier flights at low prices, so he will be able to compete with low-cost carriers like Wizz Air, another Hungarian airline serving 30 some countries in Europe and the Middle East.

József Vágó is a supremely self-confident man, and I hope for his own and his investors’ sake that his bravado is not without foundation. An interview with him on Egyenes Beszéd (ATV) will give you a taste of his personality. He calls himself a “dragon,” which will also be depicted on the tail of the plane. If we can believe Vágó, he is the only person in the whole world who has developed a model that guarantees rapid profits and expansion.

Initially the airline will lease only six twenty-year-old Boeing 737-500s which, he admitted, are less fuel efficient than later models. But Vágó emphasized that they are in excellent shape because they flew very little. A European airline used them as VIP planes; they flew between Europe and the United States for a few years. These VIP planes were refitted to imitate private jets in their comforts. He also added that there is a possibility of purchasing outright twenty-two planes in addition to the 737-500s; these will be newer models.

But that’s not the end of Vágó’s business plans. He envisages at least 50 planes flying practically everywhere, including the Far East and the United States. Just yesterday he announced that the Chinese promised 1 million passengers to Sólyom once the company reaches the point of full capacity and has regular flights to China. If I recall, Malév didn’t manage to do well with its Chinese routes but perhaps Vágó will have better luck.

When will Sólyom be profitable? In four months, answered Vágó without any hesitation. Well, I’m an optimistic person. Some of my friends call me Pollyanna after the ever optimistic heroine of a popular American book for girls written in 1913, but even I found it difficult to embrace this guy’s unbounded belief in himself and in the bright future just ahead for him and his company.

It seems that the mysterious backer of József Vágó is Emirates Airlines, which is based in Dubai. It is the largest airline in the Middle East, operating over 3,000 flights per week and serving more than 130 cities in 77 countries across six continents.

So, perhaps Vágó has reason to be confident. What I find funny is that the Orbán government has been courting the United Arab Emirates and other Middle Eastern countries for direct investment in Hungary with no tangible results, and here is this Vágó who was an unknown until a month ago who seemed to be able to make a deal with Emirates Airlines.

When Olga Kálmán of Egyenes Beszéd asked him whether he discussed his business plans with the government, Vágó made it clear that he wouldn’t have trusted the government with his plans and that he finds governments not fit to conduct business where decisions must be made fast. Governments are far too bureaucratic to be effective partners of private enterprise.

Now we can wait for the airline’s profitability and eventually the one million Chinese tourists.