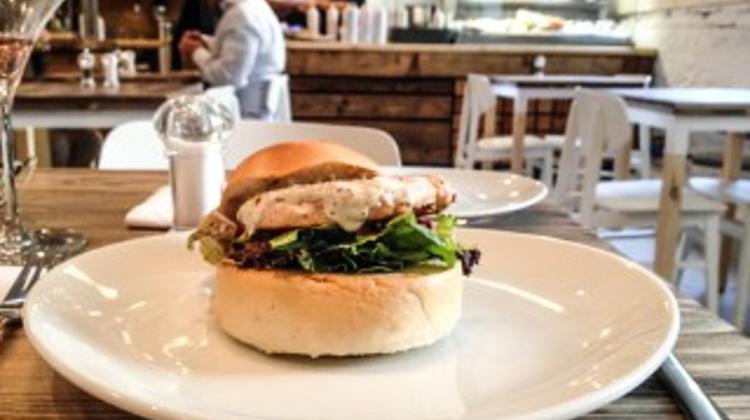 By <a href=" http://welovebudapest.com/en " target="blank"> We Love Budapest </a> : Even though fish dishes are getting more and more popular by the day in Budapest, the city’s variety of sea food eateries is still not enough to fully satisfy fish fanatics. Recently opened Nemo Fish & Chips Bar surely has a couple of tricks up in its sleeve to mesmerize sea food enthusiasts, so if you consider yourself a part of the fanbase, don’t wait around, head over to Lövőház utca.

A few years ago, a new trend popped up in Budapest, and numerous restaurants specializing in fish dishes appeared on the scene. The perfect examples for such eateries are Halkakas, centered on Hungarian fish cuisine, and Andrássy út’s semi-posh bigfish, which was opened in the spring. Nemo Fish & Chips Bar joined the city’s fishy lineup a couple of weeks ago, and became an instant sensation.

Even before the exact date of Nemo’s official opening was announced, it was as packed as a box of sardines, and a week’s supply was gone in two days. Nemo’s name is a reference to both Pixar’s famous flick and Verne’s fable, and is also catchy enough to lay down one of the most crucial cornerstones of a potential franchise.

The place is located on the corner of Lövőház utca and Fény utca, and is housed by a former carpenter shop, though the queue’s length might remind you of either a rock concert or a strange version of a patience-boosting therapy. Nevertheless, it’s worth the wait, because the location is nice and homely, and the price-quality ratio is outstanding.

A salmon burger costs 1390 forints, a forest mushroom cream soup lightens your wallet by 490 or 790 HUF (depending on the portion’s size), while the salad (which you can assemble to your own taste from a plethora of vegetable puzzle pieces, and dressings prepared by the chef himself) costs 790 or 1090 forints. The most popular dish of all fish places – i.e. fish and chips – is served with a twist, and has jalapeno-mayonnaise dressing on the top and sweet chili dip on the side.

Some insider info on the chefs: Nemo's kitchen is orchestrated by a pair of maestros who have been working together for some time now, and have acquired their skills and their gourmet approach in high-end restaurants. A prime and sweet example of their expertise is the Nemo Tiramisu (590 HUF apiece), which was inspired by a multiple Michelin-starred French restaurant’s recipe.

Even though the street food menu is almost as long as Dan Simmons’ Hyperion-tetralogy, and munching through the whole thing from A to Z opens a portal to happiness, more extreme delicacies are listed under dinner recommendations, and should not be looked over. The most mind-tickling dish is called Crab in the Woods, which is the mysterious specialty of Chef Szabolcs Hende, and which costs 4290 HUF. It’s worth the cash, though, because it’s sure to satisfy both your curiosity and your hunger.

Nemo’s pleasant vibe is, first and foremost, established by its interior – recycled, naturally dyed wood elements, white walls, and ocean blue painting here and there -, a work of Zsófi Müller and Rita Bense. With the assistance of Sommelier, Nemo also offers handpicked craft wines from the Balaton Highlands, 100% Arabica coffee, and draft sparkling rosé. All in all, Nemo is a gastro-force to be reckoned with, and even though its adventure has just begun, it’s already near the mountaintop of Budapestian fish eateries.