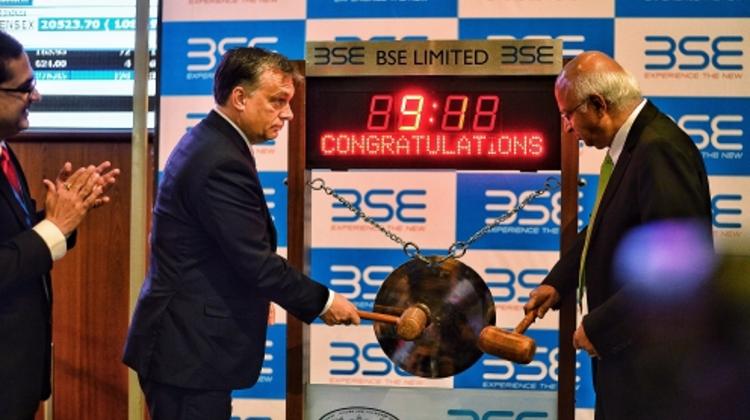 Hungarian Prime Minister Viktor Orbán, currently on an official visit to India, opened trading at the Bombay Stock Exchange (BSE) at 9:15 am local time, on Friday.

Mumbai’s stock exchange, the world's largest in terms of the number of companies on the parquet, is traditionally opened by the lighting of a lamp, which symbolises the light of knowledge dispersing darkness, and by the sounding of a gong, struck by the Hungarian Prime Minister on this occasion.

After the ceremony, the Hungarian delegation, including amongst others Minister for National Economy Mihály Varga and State Secretary for External Economic Relations and Foreign Affairs Péter Szijjártó, met with Indian investors. Later in the day, the delegation attended a Hungary-India business forum in Mumbai, where the Hungarian Prime Minister stated that within 4 or 5 years Hungary's electricity prices could be the lowest within the European Union, provided that the country increases its nuclear capacity.

Talking to an audience of around 70 Hungarian businesspeople and representatives of Indian companies, he noted that the Hungarian Government was currently reducing the retail price of electricity and wants to cut prices for industrial consumers in the future, while adding that nuclear energy was indispensable for price cuts. He noted that nuclear power now covered some 40% of Hungary's consumption, but that ratio could reach 60-70% in the next decade through increasing the country's nuclear capacity.

Prime Minister Orbán stated that the Government was about to sign an agreement concerning the planned expansion. He said the precondition for Hungary to have the lowest electricity prices in 4 or 5 years is that the current ruling party wins next year's elections. In contrast to Europe, the US has succeeded in recovering from the crisis because energy prices there are around a third cheaper than in Europe. If Europe fails to find a way to cut energy prices, both for households and in the business sector, then it has no chance to recover its economic competitiveness, especially not in the automotive industry, he emphasised. He added that Hungary's success in vehicle manufacturing resulted from the high standard of local engineers and low labour costs, but energy costs will be one of the most important conditions of companies' competitiveness in the future. Commenting on tourism links between Hungary and India, Prime Minister Orbán urged Indian investors to enter Budapest's hotel industry, making it easier to attract Indian visitors to Hungary. He stated that Hungary was perhaps the most important location in Europe from the point of logistics. The most important areas for Hungary-India economic cooperation are the vehicle industry, the construction industry, pharmaceuticals, energy, water and waste management, agriculture, info-communications and biotechnology, the Hungarian Prime Minister pointed out. He added that the Government had already signed strategic cooperation agreements with two Indian "flagship" companies that have invested in Hungary.

The governments of Hungary and India had made all the necessary steps to provide opportunities to businesses and it was now up to them to exploit these opportunities he stated, adding that Hungary should triple its exports to non-European markets by 2018.