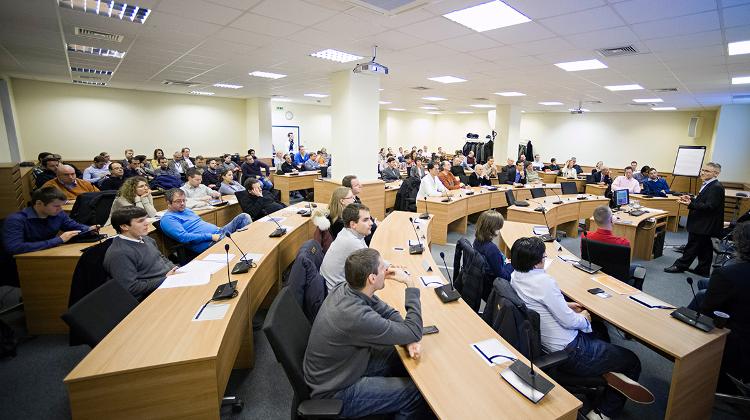 Certain parts of the economy have remained flat over the years, but e-commerce is an area that has seen persistent growth of 20-30% per year. With this in mind CEU Business School held a roundtable discussion Tuesday evening on the State of the Art in E-Commerce to a standing-room only audience. Professor Paul Lacourbe hosted the event that brought together panelists from Hungary’s e-commerce leaders Digital Factory, Foodpanda, Easyling.com and Jateknet.hu.

Szabolcs Valner of Digital Factory (and formerly Vatera) was the first to speak, whose current company Digital Factory helps local startups go global. To illustrate that Hungarian companies can succeed internationally, Valner highlighted LogMeIn, Prezi, LiveJasmin and Ustream, adding that there is a tendency to disregard LiveJasmin since its focus is adult entertainment, but that its success cannot be overlooked.

Valner added that it is not easy to succeed internationally, because for every fifty successful Hungarian companies there is only one that is a global success. Nonetheless, as his examples showed, it certainly is possible. Valner continued that the best strategy for entering a market is to identify where a company can do better than its competitors and then do a significantly better job in those areas to win customers over.

Ákos Bognár of Jateknet.hu said that his online toy retailing enterprise has seen growth of 1000% over the previous five years. He added that 70% of the company’s revenue was from November and December in the lead up to Christmas.

Bognár spoke of the importance of logistics and how Jateknet.hu is always working on speeding up the process of delivering goods to the customer, saying that for online companies being able to deliver within 24 hours is key, otherwise people could just go to the store. Bognár also emphasized the importance of establishing trust with the customer to ensure repeat sales.

Zsolt Csapo of FoodPanda spoke of the particular challenges faced by his company, which puts restaurants and as he phrased it – “hungry people” – in contact by providing the online ordering platform. Csapo mentioned the challenges of marketing to this segment, as it is difficult to tell when an individual is hungry, nonetheless, they have to be reached at that time, since if they eat, they will no longer need the services his company provides.

Csapo added that having a variety of cuisines is not enough; brands were also important, as well as different levels of quality and cost in a given category to cater to different clients. He closed by stating that customer care is especially important and that FoodPanda is quick to resolve any issues that may arise, because a happy customer is one who will return, echoing the words of Ákos Bognár.

Balázs Benedek of Easyling.com spoke of the need to reach consumers in their native language. He cited a study that 90% of individuals will go to a website in their own language and that non-Anglophones are six times more likely to not use a website than their English-speaking fellow citizens. He argued that with webpages being dynamic and constantly updating, the old method of sending documents to be translated was no longer a valid option for online content.

Benedek continued that in addition to languages, server locations were also important for companies as that also determined rankings in search engines. Which languages to then make content available is also essential, for 80% of the “internet GDP” was confined to five languages, with English accounting for nearly half of it.

What the evening highlighted is the multiple challenges and opportunities e-commerce bodes for the future, and taken together, the talks can be distilled into the importance of making contact with customers, ensuring they are satisfied, and building up trust with them so they return again and again. Lastly, it also showed that it does not matter where a company comes from if the idea is great and there is a well-executed business plan to support it.