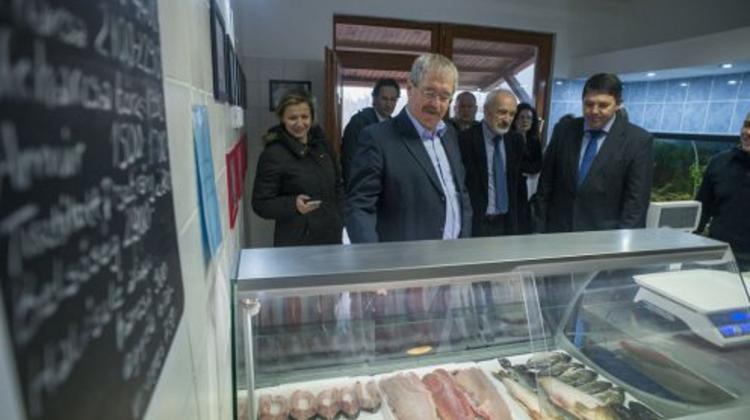 As a result of the Ministry of Rural Development's promotion campaign launched at the end of last year, fish consumption is the only area within the food sector that has seen a marked, 20 percent increase in Hungary this year, Minister for Rural Development Sándor Fazekas declared at the opening of this year's fish marketing drive in Tiszafüred on Monday.

Mr. Fazekas stressed that the Ministry had decided to continue the promotion campaign to achieve a further increase in fish consumption, which has gone up by 1kg to 5kg per person since last year. In addition, another important goal is to increase the ratio of domestically farmed fish to reach the tables of Hungarian families, he added.

The Minister stressed that the sector is capable of producing excellent quality products and the choice of products has also increased in recent years, with more and more ready-to-eat products reaching supermarket shelves. The 21,460 tons of fish processed yb the food industry last year is expected to increase further, by some 10-15 percent according to estimates, Mr. Fazekas said.

The Minister pointed out that the sector was about to close a successful year, one sign of which is that out of the 36,800 hectares of registered area, the total area of filled fishing lakes used for production in Hungary has increased by 7 percent to 25,000 hectares.

Mr. Fazekas also spoke about the fact that the new law on fish farming is continuously being tested in practice, and any amendments needed are being made as required in light of the experience gained. In addition, the implementation system of certain details such as the terms and conditions for using fish radar, are also being finalised, he promised in reply to a question form the press. He also reminded those present that that a few days ago he had temporarily banned fishing on Lake Balaton in view of the fact that the owners of fishing rights for the lake had received serious criticism recently, which must be investigated, while also reassessing the present system for issuing fishing rights.

He mentioned the Lake Tisza model as a possible solution, where fishing and angling rights have been performed by a self-regulating community that includes the related local governments, is operating well and takes maximum account of sustainability criteria. In closing the Minister also drew attention to the Ministry's fish marketing publication entitled "Put Hungarian fish on the table", which includes information and recipes relating to domestic fish species.

At the press conference, Minister of State for Food Chain Supervision and Agricultural Economy Endre Kardeván states that consumption of fish from fish farms and fish caught in the wild represent 36 percent and 14 percent of fish consumption on the domestic market, respectively.

The remaining 50 percent is derived from retail sales of imported fish. One of the primary goals of the Ministry of Rural Development is to improve these ratios, as well as to increase the number and capacity of the 31 Hungarian fish processing plants currently operating in Hungary with an output of 3500 tons-a-year, the Minster of State declared. As he stated, in the interests of our health everyone should eat more Hungarian fish, which is much healthier and much tastier that frozen products that have been imported from far-away countries.