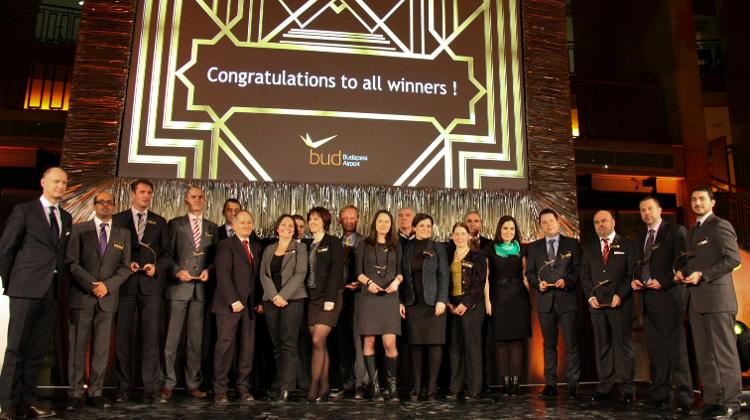 A total of 12 different airlines and service providers were acknowledged by Budapest Airport at the traditional Aviation Gala held at the elegant Terminal 1 Event Centre. Stakeholders from all areas of the aviation industry in Hungary see good prospects for growth in 2014.

Almost two hundred guests from the aviation industry, tour operators, government officials and media representatives attended this year’s traditional Budapest Airport Aviation Gala. This is the symbolic occasion where the airport operator can express its acknowledgement to its partners for their efforts and results achieved in 2013.

The following awards were presented by Jost Lammers, CEO and Kam Jandu, CCO of Budapest

Airport to the category winners:

“This is always an outstanding opportunity for us to reach out and recognize the excellent job done by our partners. Without their efforts and performance, the airport would simply not exist so we are very grateful and pleased to see such sterling results in 2013.

The outstanding overall results further illustrate why Budapest as a destination and as the capital city of Hungary continues to flourish,” said Jost Lammers, CEO of Budapest Airport.

He added: “We highly appreciate the efforts made by our partners, so that at the end, our passengers get better service and feel air travel to be a pleasant and unforgettable experience in Budapest. Everything is in place so that this year we can make a real step forward in passenger traffic to the benefit of Hungarian tourism and the economy overall.”

“I would like to congratulate the winners, as developing aviation is of key importance for the Hungarian economy, high-value job creation and Hungarian tourism,” commented István Komoróczki, state secretary at the Ministry of National Economy.

He added: “That is why we consider it important that the development of Budapest Airport should continue, the airport hotel and the planned cargo base should be built. We will support with all available means the efforts aimed at connecting Budapest with the large economic centres of the world with long haul flights.”