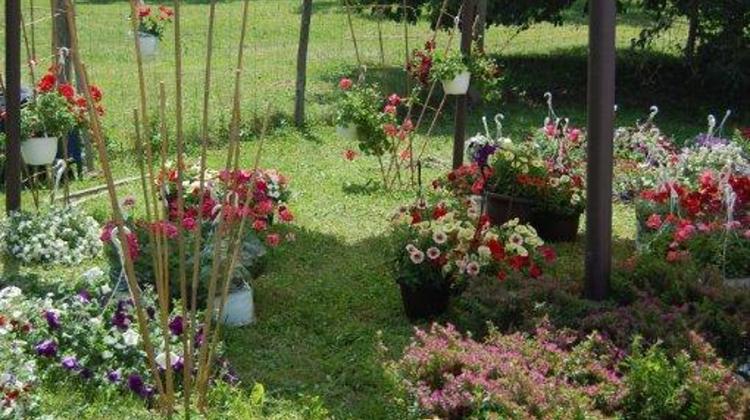 The 10th European Art of Garden Show, the traditional annual event at the Karolyi château which brings each year together some of the European garden specialists into its splendid surroundings, will take place on May 30th to June 1st. It will focus this year on Mediterranean plants and parks as well as sustainable development in historic parks with the presentation of the “hybrid gardens” and “permaculture”systems.

The traditional opening on Friday at noon by the ambassadors of the guest countries, Italy and Greece in addition to France, will precede the unveiling of the new sunddial, sponsored by Marton Géza, one of the very few Hungarian sundial manufacturer and specialist.

The private cocktail will then be followed by the specialists’ lectures:

On that day Prof. Anna Guglielmo, from the University of Catania will present the European Mediterranean Gardens program, « GARDMED », its past and future. Coming from France, Mr Geoffroy de Longuemar, President of the Association des Parcs et Jardins de Bretagne will present the system of the « hybrid parks” followed by

Mr Christian Grüssen, from the Schloss Dyck, in Germany who will present the European Garden Heritage Network (EGHN) as well as the development of the Hybrid Parks system in Germany.

After these professional conferences, the festivities of the day will end with the Greek music concert performed by the Kariatidák Korus and the Akropolis kompania at 5 pm.

On Saturday from two to four, the audience will have the possibility to listen to the conferences of our Greek guest, whose trip has been sponsored by Aegean Airline, Dr. Maria Papafotiou, head of Floriculture & Landscape Architecture department of the Agricultural University of Athens, who will present the historic gardens in Greece, while Mr Hárs Olivér, President of the Castanea Association for Environmental Protection of Sopron will refer to the not well enough known in Hungary impressing and moving, ecologic and historic initiative which is the « European Green Belt”: this natural lane along the former Iron Curtain…

Remaining in the theme of environemental protection, Mrs Máthé Katalin from the Corvinus Egyetem, Budapest, will explain what is « permaculture » and why it is one of « the » solution for real sustainable development in gardening. The following conference by Ombodi Ildiko, landscape architect, will persent the history and the now starting reconstruction project of the park of the château.

The day cannot end without a journey through the world of ancient gardens of Rome and Greece with Agnes Fekete, art historian and permanent cultural collaborator of the Joseph Karolyi Foundation.

On Sunday, a famous collector of succulents, Szupp Vilmos will share with the audience his passion for another mediterranean plant very appreciated in Hungary, the commonly called « cactus », before Zólyomi Zsolt, the only Hungarian « nose », will reveal « the scents of the Mediterranean Sea since Human Antiquity ». He will be followed by Mrs Heyek Andrea from the Hungarian oleander and Mediterranean Gardens Friends Association, who will unveil « The thousand faces of oleader ».

The day will end with the awarding of the « most beautyful stand ». (A four day journey to Paris).

16:30 Awarding of the prize of the most beautyful stand
Complete program can be sent on request.