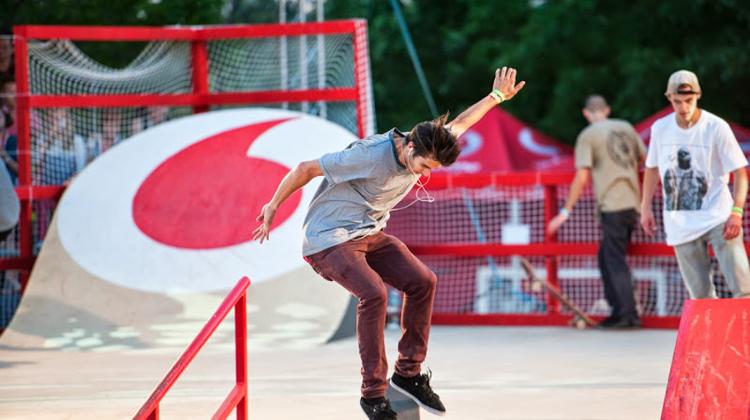 As part of the global Vodafone Firsts initiative, an international skating event saw the unveiling of the world class Görzenál park in Budapest. The refurbishment of one of Europe’s biggest skating and recreational parks has made the dream for hundreds or even a thousand Hungarian skaters a reality.

For the overhaul of the park that has continued to sink into dilapidation over the past years, Vodafone commissioned Britain’s Four One Four, which among others, took part in the preparations for the opening ceremony of the 2012 Olympic Games in London, as well as organizing numerous international stunt bike and skateboarding events. The new track received 700 square meters of Russian birch flooring, its base is made of layered wooden materials, making the track quiet, stable because of its structure, durable and naturally, it meets all safety requirements.

“We were more than happy to support Balázs in making his dream a reality, in preparing what we hope will be inspiring videos and that we can contribute to strengthening the Budapest skating community through building a world class skate park, which we hope will be a place of fun and joy for generations to come,” said Vodafone Hungary brand manager, Péter Baráth.

The park, which is now open to the public, performed with excellent results Friday, when Hungarian and British skaters competed in a professional contest in the frame of a large scale show.

The park’s makeover is a dream come true for “skateboarding revolutionary,” Balázs Jassek, the first Hungarian participant of the Vodafone Firsts project, as well as hundreds of other local skaters. As Balázs explained, the track sinking into decay and the lack of investments led to skateboarding being essentially outlawed in Budapest, making it increasingly difficult to pursue this highly popular sport in an adequate and safe manner.

Balázs cooperated with Vodafone and used the company’s mobile technology to unite the Budapest skateboarding community, to show the world how the city looks from a boarder’s perspective.

Balázs Jassek believes skateboarding is entertainment and freedom combined. Balázs hopes that the refurbishment of Görzenál along with the newly completed videos will reinvigorate the skating scene in Budapest, and will also show other parts of the world how great Budapest is and how great it is to skate here.

For more information on the Vodafone Firsts program, visit firsts.com