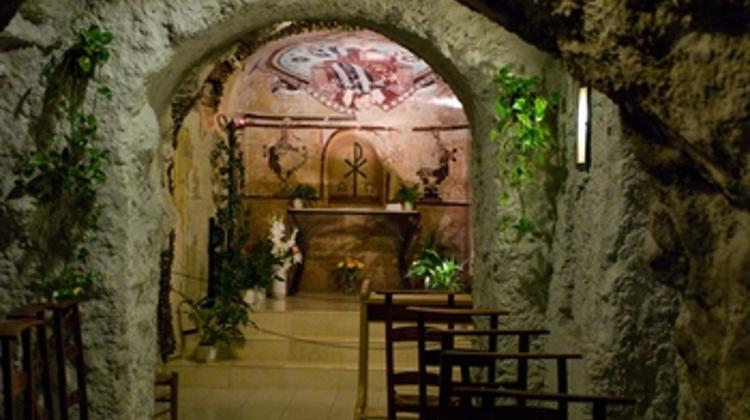 Located on Gellert Hill overlooking Liberty Bridge, the Cave Church is a unique grotto chapel cared for by the Hungarian Paulite order of monks. Closed during the Communist period, it has since been reopened and offers a peaceful respite from the noise of the city. This cave was originally home to Saint Istvan, a hermit monk who cured the sick with thermal waters that sprung in front of the cave.

The Cave Church was founded in 1926 by expanding the hermit's cave. The church was further enlarged in the 1930s by the Archbishop of Kalocsa to hold more worshippers, using the grotto at Lourdes as a model.

In 1951, the Communist secret police arrested the entire order of Pauline monks. The superior Ferenc Vezer was condemned to death, while the others received 5- to 10-year prison sentences. The chapel was blocked up with a 2.25m thick concrete wall, behind which it stood silent for nearly 40 years.

After the fall of Communism in 1989, the Cave Church was returned to the Paulite order and immediately reopened.

The Cave Chapel's small interior, with natural rock walls and various niches filled with statues and altars, is atmospheric and peaceful. The acoustics of the cave make for a memorable experience when music is played during a service. Outside, there are fine views of Liberty Bridge and a modern statue of St. Istvan holding a church.

Get more info from: Sacred-Destinations.com