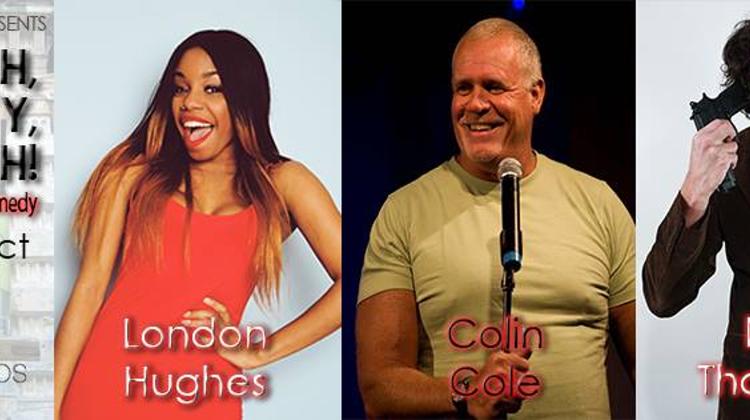 On Wednesday 22nd of October, at 8 p.m. Brody Studios features the fifth in the series of English comedy nights hosted by Dave Thompson, best known as a brilliant one-liner writer and performer in Harry Hill’s TV Burp, and former Tinky Winky from ‘Teletubbies’.

The fifth comedy night features two international stars: London Hughes and Colin Cole. Miss London is the winner of the prestigious Funny Women Award held at the Comedy Store. It’s been a while since a female voice has taken the UK comedy scene by storm.

Not only has London graced our screens as a presenter for CBBC and for ITV, she was also recently a panelist on ITV2’s show “Vinal Tap” and also featured on their show “Bad Bridesmaid” where she caused deliberate and hilarious mayhem.

Colin is literally one of the biggest names in comedy in Australia- not only is he 6’7”, he is also known for his hugely dynamic performance. His delivery is fast and furious, and his material ranges from the topical to the observational. Colin is a highly skilled and experienced performer, his ability to break barriers with this university funny material makes him appealing to a wide range of audience. His TV credits read like a “guide to Australian Television” they include hit shows such as ‘Hey Hey’, ‘The Max Gillies Show’ and ‘Bingles’.

“As feisty as they come, high-impact Miss London bursts onto the stage with attitude so-in-your face you can’t ignore it” –Chortle

Tickets must be purchased in advance – contact brody Studios by clicking here with all enquiries.
2.500 HUF per person for members | 3.500 HUF for non-members