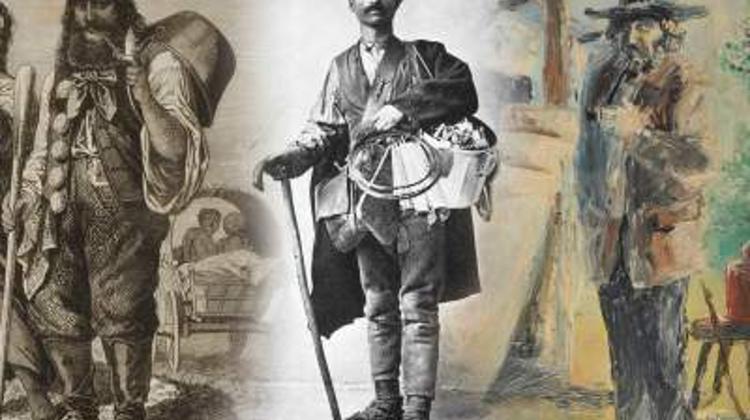 Need household appliances? Nowadays you can easily buy them in hardware stores. But there was a time when you had to wait until craftsmen visited your house with their ware. Until January 4, 2015, the Budapest Museum of Ethnography has an exhibition about the history of migrant braziers, pot menders and trough carvers. Note that some itinerant craftsmen still rove the roads offering their services to eke out a living.

There is no telling how many traders and handicraftsmen are still on the move in this region but they must number thousands. These service providers are in a desperate financial situation and they visit houses to help in the daily chores of the better off.

Many Roma rough it, for instance, in the Vértes Mountain in western Hungary to collect ramsons and then sell them by the bunch in streetcar stops in Széll Kálmán Square in Budapest,” says sociologists Péter Szuhay, curator of the exhibition and museum staffer in charge of artifacts of Roma culture.

Bearing the somewhat philosophical title of “Dispossession and Self-Respect”, the exhibition offers a breath-taking richness of objects, well-written and easily readable texts in Hungarian and impeccable English translation, paintings, sculptures and video segments.

It addresses issues like the social position of wandering craftsmen and traders in general and those of Roma ethnic background in particular in the 18th to 20th centuries. Note that not all itinerant handicraftsmen of Eastern Europe were Roma.

In rural areas in Hungary you still meet migrant traders of lavender, collectors of eiderdown, vendors of vegetables and potatoes, traders of belts and socks. Such activities can also be seen Budapest’s commuter belt.

Other migrant traders collect unused household appliances placed on the curbside, collect and sell iron and other metal parts from houses and workshops. An upmarket version of such activities is buying used cars in Western Europe, spiffing them up and then reselling them in Hungary.

The central themes of the exhibition are Roma kettle makers and trough carvers and Slovak braziers. These craftsmen set up gangs of about thirty to organize work. They spent time at a village, served clients and then moved on. Some of those gangs spent on the road as many as sixty years. Some worked on commission while others had to knock on doors to offer their ware.

Szuhay says that in Romania kettle makers and craftsmen working in brass are still usually Roma.

What’s a trough worth?

It took a man a whole working day to make a trough. In the Museum of Ethnography eight persons were needed to carry a heavy log that was used to demonstrate wooden material from which troughs were carved. A major log can weigh as much as 500 kg.

The Gypsy voivod had the role of organizer. Those people were elected voivod that were clever in finding lumber and market and were good at striking deals. If a voivod underperformed, he was dismissed and replaced by another one.

If a household object broke, wire was used to repair and reconstruct it or soldering was applied. In Russia a good price could be fetched by selling mousetraps and rat-traps.

Szuhay says that today in Hungary there are only two or three persons who can repair and reconstruct household appliances with wire but in Slovakia there are more.

In Slovakia even a festival is regularly held for such craftsmen. The “Festival drotártsva” is regularly held in Zsolna (Žilina. Such an activity fits the current fashion of “do it yourself” and “slow design”. When in 2012 a competition for makers of wire roosters was announced, 54 Czech and Slovak craftsmen sent their products.

The Budapest Museum of Ethnography emphasizes the importance of acquainting museum-goers with the past and present lifestyles of Hungary’s national and ethnic minorities, their social conditions and cultural traditions. The exhibition also addresses the question what were the sources of the self-respect of those migrant craftsmen and traders in social climates where they were often despised and/or derided. The target audience of the exhibition also includes visitors from neighboring countries, the elderly and those with a lower income.