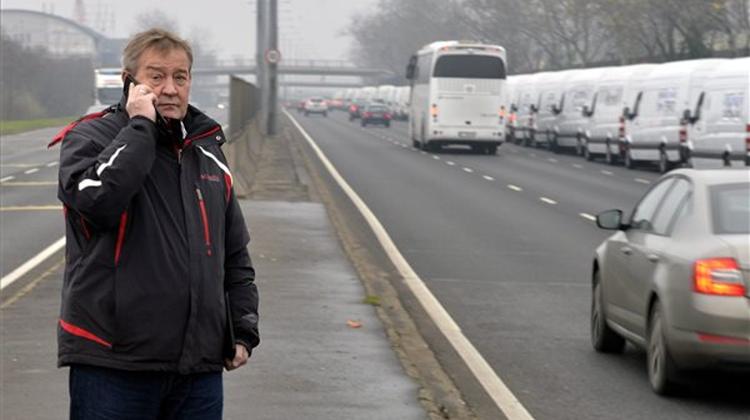 A pro-government commentator argues that the nationwide demonstration proved the presence of vibrant democracy in Hungary. Meanwhile she criticises the government for imposing toll on the Budapest highway belt as well as MPs for wanting to exempt themselves of highway tolls.

On Monday, between two several thousand strong anti-government rallies held by spontaneous groups in Budapest on Sunday and on Tuesday, trade unions organised partial roadblocks throughout Hungary to protest against what they termed “restrictive 2015 budget”.

The presence of 1300 vehicles blocking roads in and outside Budapest proves that democracy in Hungary is unfettered, Anna Szabó writes in Magyar Nemzet. She adds that the vigorous attacks on the government by the opposition media is evidence that the allegations of dictatorship and media censorship often voiced at home and abroad are absurd.

At the same time she thinks some of the demonstrators’ demands should be seriously considered by the decision makers. She understands that the government wants to avoid being submitted to an excessive deficit procedure by Brussels and thus must impose unpleasant levies.

However, she resolutely objects to imposing a toll on the beltway, for masses of people will thus chose other routes and pollute densely inhabited areas. “Is it worthwhile to open a new front against society for a planned budget entry of 20 billion forints?” Szabó asks.

She finds it particularly distasteful that while Parliament is about to enact that toll, MPs, including almost all opposition politicians have supported a bill authorising them to use their fuel cards to pay motorway tolls to be passed in a “rapid procedure” and thus come into force before New Year’s Day. (The socialist floor leader eventually declared that his MPs would not vote in favour.)