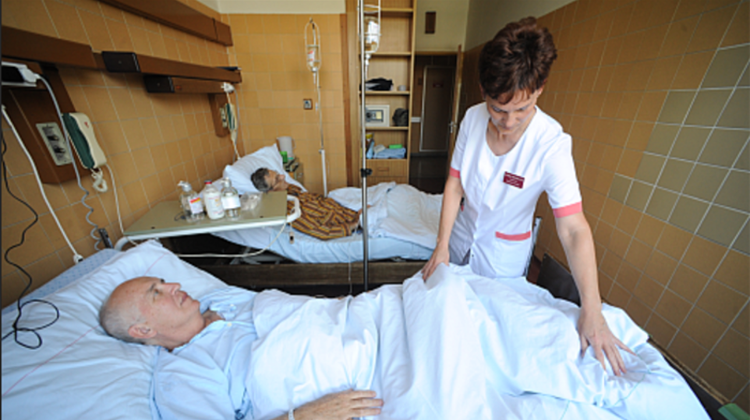 The people need to understand that we are not talking about how much residents or expert doctors make, but whether they will be treated when they go to hospital, says Tamás Dénes, President of the Hungarian Residents Association. Doctors and expert health workers are moving abroad because of low wages and poor working conditions.

For this reason patient security is jeopardized in certain areas because institutions cannot provide the minimum personnel necessary to care for the sick. Hospital debt is more than HUF 70 billion (USD 260 million), which the government previously promised to clear up, and the government is now pledging to raise salaries. If no agreement is reached by September, then health workers may go on strike.

The health under-secretary has proposed to increase doctors’ monthly salaries in 2015 by HUF 100-200,000 (USD 370-740). However, this is far less than doctors would like to receive, at least according to Dénes. Furthermore, in exchange for the raise, doctors will be required to sign a declaration that they will not accept the so-called “gratitude money” otherwise known as bribes or tips.

Deputy under-secretary for health politics Attila Beneda says “it is necessary to take into consideration the economic viabiliity of this,” adding that “one musn’t forget that after a long period in 2012 and 2013 the sectoral wage increases already started.” He believes that September is still a ways off, and hopes they can agree with the doctors. “We even said at that time they were only the first steps,” says the deputy under-secretary.

“The goal,” says Dénes, “is to leave the gate open for those who have gone abroad, because we need these doctors.” With regard to expert doctors, the association cannot imagine doctors agreeing not to go abroad as a condition for receiving a higher salary, and believes this would only lead to greater opposition. Further, he does not believe that preventing doctors from moving abroad is the solution. The additional HUF 1.2 million (USD 4,440) they stand to receive annually is roughly equal to a month’s salary elsewhere in Europe, or less. Dénes says anyone taking a job abroad could easily repay this, and warns that those leaving are highly unlike to return during their lifetime.

“Of course, we agree that tips should not be accepted but only if (the next) step following the under-secretary’s announcement of last Monday is a wage adjustment along the lines of what we expect,” he said.

If the residents’ association cannot reach an agreement with the government, then its members are planning a “two hours patience for your life” industrial action for this Autumn, meaning that between 8 and 10 am there will only be emergency services.

On the subject of emigration, Dénes says that according to the official government communication, the numbers of health workers leaving the country has decreased or stagnated. By way of example, he cited the example of the Czech Republic where they “sound the alarm” if even 300 doctors leave in a given year. “In Hungary, we should be happy if this number is only 945,” says Dénes.

“We aren’t greedy. We were satisfied in 2012 and 2013 with the wage increases that took place. This, however, stopped.” He says that if the same thing were to happen as in the Czech Republic, where 2 percent of GDP is invested annually into health matters, that “itself would be Canaan”. According to Dénes, in Hungary’s case this would amount to some HUF 600 billion annually.

Daily economical Vg.hu writes that there are areas of specialization where there is such a great shortage of experts, where health care is “sporadic”, that it seriously threatens the well-being of patients.

Ágnes Rúzsa, president of the Hungarian Clinical Oncology Association, says experienced, very knowledgable oncologists in their 40s and 50s are leaving to go abroad where “representatives of the psychologically demanding health field” are paid above average wages. The same applies to surgeons, where, according to Attila Oláh, President of the Professional College Association of Surgeons, the necessary hospital personnel can only be assured with the involvement of retired surgeons.

At least as many health technicians are leaving as surgeons

The average wage in the case of Hungarian health workers is among the lowest, according to national economic data, if not the lowest, says Zoltán Balog, president of the Hungarian Chamber of Health Technicians. Balogh maintains that the average monthly gross wage in this field is a mere HUF 141,000 (USD 520), barely half the national average of HUF 246,000 (USD 910).

Wage increases nearly always only pertain to doctors, even though some 100,000 people work in public health care who are not doctors, says Balog. For this reason they work for an undignified net wage of HUF 97,000 (USD 360) a month. And not for 174 hours a month, says Balog, but often 20-50 hours more.

In the case of professional nurses and other workers the ratio of Western wages to those of Hungary is 10 to one, just as in the case of doctors. In other words, health care workers earn one-tenth as much in Hungary as they do in, say, Germany, England or Sweden. As in the case of doctors, these workers migrate abroad, says Balog. According to the chamber’s calculations, 600 technicians leave Hungary every year. As many of them do not speak the language of the target country, they don’t take jobs in their field but, for example, in caring for the aged.

The government idea of closing hospitals and designating one main general hospital per county does not solve the problem of the missing health technicians, Balog says, adding that “the ratio of nurses to patients is already so bad that even after reorganizing, combining and restructuring, it will still not be possible to save on the necessary staffing.” He says some 4,000 health technicians are currently missing

As of the end of January hospital arrears amounted to some HUF 71 billion (USD 263 million), 4 percent of which pertained to 2013, reports vg.hu. The situation is now desperate. Certain suppliers have resorted to taking out loans to pay their taxes and payroll taxes because hospitals are months behind paying their invoices. The directors of the country’s hospitals are waiting for the state to consolidate hospital debt. Meanwhile, they have difficulty explaining their failure to pay, according to the general secretary for the Alliance of Medical Technicians, László Rásky.

In April 2014 leaders of Hungary’s public health system promised to undertake a HUF 60 billion centralized debt consolidation. Rásky thinks that by the time the government actually gets around to settling hospitals’ debts, their arrears could be substantially more.