There Can Be No Taboos, PM Orbán Tells Top Academics 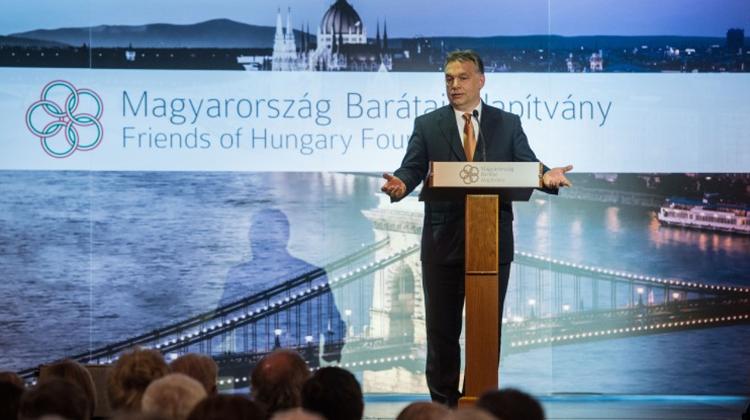 Politics must deal with real-life problems instead of ideological obsessions and the country must develop its own answers to issue of concern to us, Prime Minister Viktor Orbán told over 150 leading academics, businessmen and scientists at the Friends of Hungary Foundation’s second international conference in Budapest on Saturday.

For Hungary to be successful and remain steady and reliable in this uncertain world, no single question can be treated as a taboo, the Prime Minister argued, pointing out that the country must see beyond its borders and be open and perceptive to what is happening in the world. Those who fail to pay attention will not understand the changes and will therefore loose out on them, he said.

Europe is hesitant because it has lost confidence in its identity and objectives. Nobody can be sure whether the continent will be able to give adequate responses to the Paris terrorist attack; while Europe conducts its debates in the cycle of multiculturalism, political correctness and similar fixations, Australia is ready to protect its borders, the Prime Minister highlighted.

We are living in an uncertain and unpredictable world and we Europeans should take the responses dictated by our life instincts instead of escaping to “the world of voodoo and taboo” from the questions affecting our own lives, he stressed.

Speaking of his government’s accomplishments over the past five years, he said that the cabinet begain work in 2010 “from a pitied and hopeless position, amid attacks and criticism from abroad” but 2014 elections have proven that the country has taken the right direction. During the past 1800 days, the country has tacked the economic crisis, created the conditions for financial stability, decreased public debt, adopted a new Fundamental Law, strengthened Hungarians’ identity and rescued several hundreds of thousands of people from the debt trap.

Responding to questions from the Foundation’s members, the Prime Minister explained his positions on the country’s national image, tourism and innovation and made a number of pledges in connection with the questions put to him. He also criticised the “omnipresent intellectual trend considering itself progressive”, which aims to extend liberty through demolishing the barriers of gender, national identity and religion. Hungary does not agree with such positions and will not pretend that it does, he said.

Established in 2011, the Friends of Hungary Foundation aims to serve as a bridge connecting Hungarians living in the Carpathian Basin with their compatriots in the diaspora. Its goals include providing Hungarians living around the world with unbiased information on the country and popularise Hungarians’s successes in the field of culture, business and science.