Xpat Opinion: Ambassador Eleni Kounalakis On Her Years In Hungary, Part I 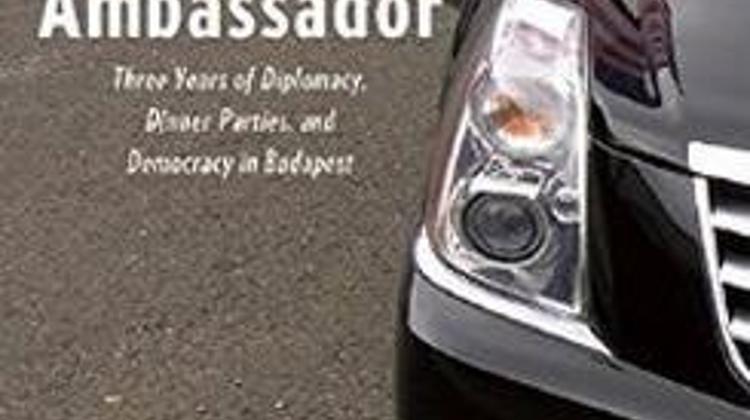 I just received Eleni Kounalakis’s Madam Ambassador: Three Years of Diplomacy, Dinner Parties, and Democracy in Budapest (New York: The New Press), recounting her years in Budapest as U.S. Ambassador. I must say that I was pleasantly surprised by the book, which luckily, despite its subtitle, has little to do with dinner parties. Instead, we have an account of the turbulent first three years of the Orbán administration (January 2010-July 2013), told from the perspective of someone who desperately tried to develop a friendly relationship with the Hungarian officials with whom she had to deal.

As far as I know, no former U.S. ambassador to Hungary has written a book about his or her stay in Budapest since John F. Montgomery’s Hungary: The Unwilling Satellite (1947), which is by and large an apologia for the pro-German policies of Admiral Horthy and his governments. So, it is not an everyday affair that a book is published about U.S. -Hungarian relations that allows us to glimpse behind the scenes.

Kounalakis was a political appointee, as most U.S. ambassadors to Budapest are, and therefore upon her arrival she was pretty green, especially since originally she was supposed to be sent to Singapore and the State Department initially prepared her for that post. From sentences dropped here and there, I came to the conclusion that she had very little knowledge of the recent history of the country.

What I mean by “recent” is the last 10-12 years of Hungarian politics, because otherwise she should have known that her stay in Budapest was going to be anything but dull, as she anticipated. From her book we also learn that the officials of the U.S. Embassy seemed to have forgotten the years of the first Orbán government (1998-2000) and occasionally showed signs of political naivete when it came to assessing the policies of the prime minister.

I will write more about this book later because the author discusses many aspects of U.S.-Hungarian relations during her tenure. Here I would like to concentrate on Eleni Kounalakis’s attitude toward the Orbán government and her personal relations with Viktor Orbán.

My impression is that while she had uneasy feelings about the direction in which Hungary was headed under the premiership of Viktor Orbán, she desperately tried to convince herself that she would be able to have good relations with the members of the Hungarian government.

Orbán himself might be a difficult man, but he “had managed to attract some of conservative Hungary’s best and brightest to work in his government.” She “reasoned that if he was ever tempted to throw a grenade into the U.S.-Hungarian relationship … his own ministers might be motivated enough to hold him back.” (p. 105) Anyone who’s familiar with the servile ministers around Orbán knows that Kounalakis was sadly mistaken in her assessment.

She was especially impressed with Foreign Minister János Martonyi and Justice Minister Tibor Navracsics and describes both of them in glowing terms. Navracsics was “a star of Hungarian politics,” “a brilliant transatlanticist.” For some strange reason she believes that Navracsics was “a politician in his own right, with his own following” and that it was Orbán’s good fortune that he joined his cabinet. In fact, as we know, Navracsics served Orbán well.

He could explain in a most reasonable manner how Orbán’s undemocratic policies were not undemocratic at all. A case in point is a conversation between Attorney General Eric Holder and Navracsics that resulted in Holder’s not bringing up the question of the Hungarian media law because Navracsics “eloquently explained the government’s position.” (p. 163)

János Martonyi was equally useful in persuading the Americans that all would be well with the new constitution. In fact, when some small changes were made to the constitution in the summer of 2012 the U.S. officials in Budapest “were very proud that our intervention had resulted in many tangible improvements.” (p. 197)

Other ministers with whom Kounalakis had close relations were Interior Minister Sándor Pintér and Defense Minister Csaba Hende. There are two chapters in which Csaba Hende is the main character, one titled “Travels with Csaba” and the other “Afghanistan Revisited.” But more about them later.

Kounalakis arrived in Budapest in January 2010, practically in the middle of the election campaign. She wanted to meet Orbán, especially since the Americans on the spot heard rumors that Orbán “regretted not working with the United States in a more collaborative way during his first stint as prime minister.” (p. 41)

But the meeting was a disaster, due both to Kounalakis’s inexperience and to Orbán’s way of dealing with people with whom he disagreed. The second meeting, however, a few months later, went well, and one senses that the American ambassador was impressed with the “clean-cut, sharply dressed, confident young staffers, busily moving around with efficiency and purpose.” (p. 82)

This kind of ambivalence is evident throughout her book. But she was not alone in failing to grasp the true nature of Viktor Orbán and the people working for him. For example, although the staff of the embassy realized that “the new prime minister and his supermajority in Parliament added a certain level of unpredictability,” they believed that “Orbán would be careful because of the historic importance of Hungary’s first EU presidency.” The Americans were wrong. Hungary took over the presidency on January 1, 2011, and “on January 2, all hell broke loose.” (pp. 156-157) The media law was passed.

Perhaps the best example of how Eleni Kounalakis, despite her protestation to the contrary, misjudged Viktor Orbán is her description of Viktor Orbán’s performance in Strasbourg before the European Parliament. It is worth quoting the whole passage:

Orbán went to Strasbourg on January 19 [2011] to speak to the European Parliament on general EU matters, but he ended up confronting a hostile gathering. Socialist parliamentarians appeared with duct tape over their mouths to protest the new media restrictions, and “Danny the Red”–Daniel Marc Cohn-Bendit, a German Green Party member–lashed out at Orbán from the floor, comparing him to Venezuelan strongman Hugo Chávez. Orbán calmly rebutted the criticism and promised to abide by the European Commission’s forthcoming legal opinion on the new media law–as long as the same standards applied to all EU members.

With his cool responses to the circus that the Socialists created, Orbán was able to frame the debate of the Hungarian media law along partisan political lines. When I went to see Péter Szijjártó, the prime minister’s senior adviser, a few days after Orbán’s EU speech, he gleefully reported that “we are getting calls from conservative politicians from all over Europe, congratulating us for standing up to these liberals. The response from our friends is overwhelming.” (p. 159)

Just to balance this description of Orbán’s appearance in Strasbourg, I will quote from my post titled “The Hungarian Prime Minister in Strasbourg: A Day Later”:

It is one thing to read written reports of an event and something else to see it on video. It also helps to read other people’s reactions a day after. I did both this morning and I must say that today I consider Viktor Orbán’s performance in the European Parliament a disaster.
….
At the beginning of this post I talked about the two Viktor Orbáns. The one that tries to impress the world outside of Hungary and the other not-so-nice domestic Viktor Orbán. A Jekyll and Hyde story that could be played by Orbán while in opposition.

The question was how long he could play the same game when in power. The answer is: the game is over. He showed his true self when he answered his critics in Strasbourg. He talked very loudly and his voice by that time had become hoarse.

He tried occasionally to be light-hearted but his levities fell flat. For example, when he claimed that he feels quite at home because he receives criticism in similar tones in Hungary. He paused for a second, hoping for an applause that didn’t come.

What did she intend to convey about Viktor Orbán in an exchange with Condoleezza Rice? “So,”[Rice] asked, “you are saying he’s a bully but not a brute?” A bully is certainly better than a brute. What does that mean from the point of view of the U.S. government? Not so dangerous?

There is a fairly long description of a conversation between President Bill Clinton and Kounalakis in his office in New York. Clinton wanted to know what she thought of Viktor Orbán. Here is the whole conversation:

Mr. President, some people say he’s crazy. I don’t think that’s right. I see him as a very smart, very rational man. But he doesn’t seem to me to have the same concept, the same definitions as we do of democracy, freedom, and even free markets. I think he sees himself as the only one who can protect the Hungarian people from what he believes are corrupting outside influences….

But when it comes to the larger issues we’ve been talking about, like energy security for Europe and the Eastern Partnership–and Afghanistan–we are still very much on the same page as the Hungarians. They are as much a reliable partner on international issues now as they have ever been. (p. 259)

Eleni Kounalakis’s confidence was tested when, not long after this conversation, “Hungary faced a decision that pitted its economic interests against its diplomatic ones. The choice would, for the first time, shake our faith in the country’s reliability as a partner and cast a pall over our relations.” (p. 259) She was talking about the release of Ramil Safarov, an Azeri who was serving a life sentence in Budapest for the ax murder of an Armenian.

Kounalakis’s final meeting with Viktor Orbán, when she was about to leave her post, was freewheeling. Out of the blue Orbán began talking about Milan Kundera’s book The Unbearable Lightness of Being. Kounalakis took the opportunity to say that for Kundera “freedom meant the ability to live free from oppression–especially free from oppression by your own government.

That’s what democracy is all about.” Orbán’s “eyes narrowed and he waved his hand abruptly as if to beat away the comment. ‘All this talk about democracy is bullshit!'” The departing U.S. ambassador couldn’t quite believe what she heard. “He probably didn’t mean to say that democracy was bullshit, but that he rejected, and resented, my raising the subject with him again.” (pp. 281-82) I wonder what Kounalakis thinks now after hearing the Hungarian prime minister talk about “illiberal democracy” and even the superiority of autocracy over democracy.